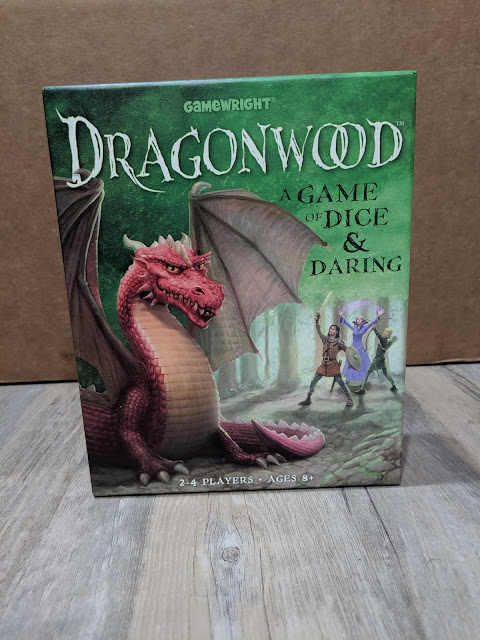 No. of Players: 2-4
Ages: 8+
Playing Time: 20 minutes.
Find more info on BoardGameGeek.com
From the Publisher:

Dare to enter Dragonwood! Deep in the heart of this mythical forest lurk angry ogres, giggling goblins, and even the famed and fearsome fire-breathers themselves!

In Dragonwood, you collect sets of adventurer cards to earn dice, which you then use to roll against your foes. Stomp on some fire ants, scream at a grumpy troll, or strike the menacing orange dragon with a magical silver sword. Choose your strategy carefully because the landscape of Dragonwood is ever-changing. Only the bravest will overcome the odds to emerge victorious!

On their turn, players either draw a card or attempt to capture a creature or enhancement. Players draw from the Adventurer deck that contains cards of 5 different colors all numbered 1-12. With these cards players form combinations to attempt a Strike (cards in a row of any color), a Stomp (cards of the same number) or a Scream (cards of the same color). To capture, players roll a number of dice equal to the number of cards they have of the particular combination. Each creature has different minimum values of a Strike, Stomp or Scream needed to capture it, and a Victory Point amount.The game includes six, six-sided dice with sides 1, 2, 2, 3, 3, and 4 to reduce extremely lucky outcomes. The Dragonwood deck has 42 cards, 5 of which are displayed in the landscape at any time. In addition to creatures, this deck also has enhancements that are captured in the same way as creatures which assist players in capturing creatures, and contains events that also impact play. When both dragons have been defeated, the game is over and the player with the most victory points wins!Is the best strategy to go for several smaller creatures or save up for larger attacks? Should you grab some enhancements hoping they will pay off, or go immediately for creatures? Do you take chances on some rolls or go for sure things? Every time you play Dragonwood the deck is different, so no two games are the same! 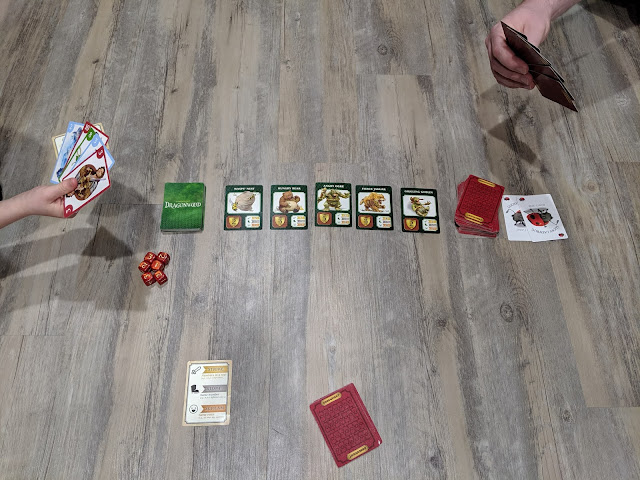 Dragonwood is a fantasy themed, family geared card and dice game.
The box states that it’s for ages 8 and up, however, I began teaching my son how to play it when he was only 3.5 years old.
The basis of play is to collect adventure cards by “reloading” up to 9 cards in a hand, then playing cards to gain between 1-6 dice in order to capture one of the 5 face-up creatures from the Dragonwood deck; with the goal being to have the most victory points at the end of the game.
Each creature has various victory points that they’re worth, and In order to capture the creature the player must either “strike,” “stomp,” or “scream” at the one they want. This game helped in teaching my son how to sequence numbers (in order to “strike” a creature), matching numbers (to “stomp” on the creature), sort by colors (to “scream” at a creature) and simple addition in the dice and victory points at the end of the game.
My son enjoys the artistry, each card is very well illustrated with the artwork being child friendly.  There’s much laughter in calling out the plays for example, “I’m going to stomp on the secret shadow” or “scream at the gooey glob” and even though this game is won mainly by the luck of the dice, it is one of our favorite games to play together.
I like the fact that it is a simple set up and is easy to learn for all ages. It’s quite enjoyable to play just him and I, when we add more players however, it can be frustrating being stuck with all the low card values on a players turn and not getting the opportunity to even try for a higher ranked card before it’s captured, being stuck at times with all 5 creatures revealed with a value of 2 or less every round. 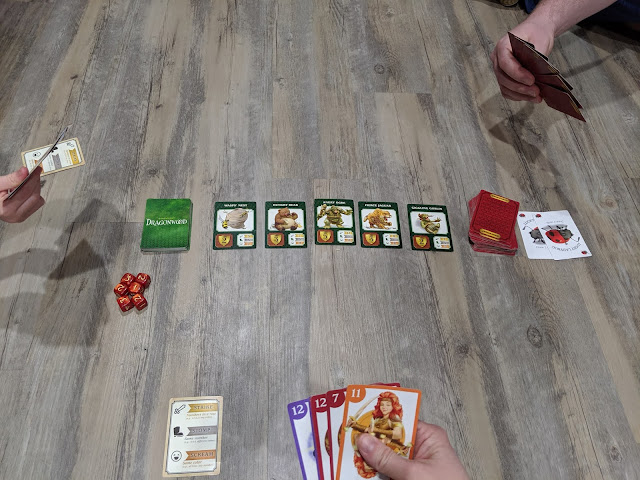 There are a total of 42 Dragonwood cards in the deck, the two dragons having the highest victory points at 6 & 7, only 2 cards have victory points of 5, and 3 cards worth 4 points each, the rest being worth 1,2, or 3 points each.
The enhancements are helpful in obtaining the creature cards more easily by adding extra dice, re-rolling a die or extra points towards capture attempts. In order to get these enhancements the player is required to use their adventure cards to “strike, stomp or scream” at them in the same way as creature cards.
There is some strategy involved in whether or not to save adventure cards for the higher victory point creatures or to spend them on enhancements with the hope it will help in the long run capturing the creatures.
Overall, it is a fun, quick game that can also be educational for younger players.
Check out Dragonwood and Gamewright on: