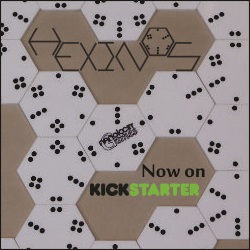 Been a while since you tried Dominos, try Hexinos!

-Place the starter tile face-up on the table

-Each player chooses 2 tiles from the pile.

-Person with the tile with the fewest total dots on goes first, then play continues clockwise until   all the tiles are placed.

-Player places 1 of their 2 tiles against 1 or more tiles in the center array, matching dot counts.   for all edges.

-Points are scored, then the player takes another face down tile.

-You always start and end your turn with 2 tiles.

-Your tiles are always hidden from the other players.

-Play continues until all tiles are placed, or someone scores a “perfect match”

A note about younger players:

As long as the player can hold and place the tiles, Hexinos can be played at any age. For younger players it encourages both pattern matching and spatial recognition – seeing their tile with an edge with 2 pips next to a 3 pip edge, but does that match what is on the tiles already on the table, or is the 2 & 3 “backwards”? And with the basic scoring system, kids easily grasp the benefit of “more edges matching is better” without needed to know addition or multiplication. 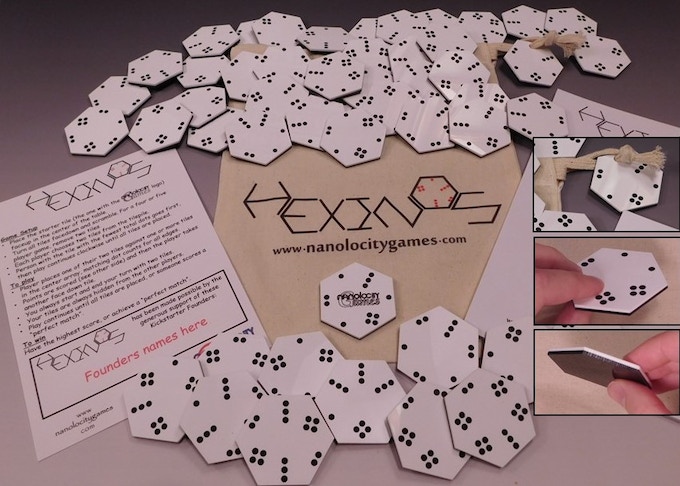 The prototype that I received included: Everything you need for a 2-5 player game: 42 unique 1/8″ thick white acrylic tiles and a high quality, US-made tile bag big enough to hold the tiles, score pad and ruleset (with the Founders names on it). From looking at the Kickstarter page it appears that basic supporters will receive pretty much the same thing that we received.

What my 13 year old daughter had to say about Hexinos “The game play was a lot like dominos. It’s a well thought out, fun matching game.

From what I remember from my childhood, I enjoyed games in this order: Card games (like Skip-bo, Uno and Phase 10), Dominos and then classic games (Sorry, Monopoly, Battleship, Clue). But after growing up and getting into hobby games then trying the older classic games as we sometimes call them I realized my tastes have changed a lot. I know because I remembered loving Sorry, I picked it up a while back so I could share the joy it brought me as a child with my own kids. After playing it with them and even during, I was like “what did I like about that again?” I haven’t really got back into dominos with the kids other than setting them up to knock them down.

From the moment I got Hexinos it’s been a different experience than these so called “Classic Games” Even just the packaging is an awesome bag. This would be a game we could take to the park or go play outside if we wanted to. But first off I love the little burlap bag or whatever kind of bag it is. It’s simple enough to hold the tiles and have the game nam on the outside as well as their website (Which might come in quite handy if one of the kids walks off with the small sheet which consists of the simple straightforward directions.). The bad also has one of the Hexino tiles attached to the string of the bag. Which I thought was an awesome touch!  Even being just. a prototype the directions are nicely typed out on small high quality kind of card stock like paper. Directions were simple enough that my 13 year old daughter was able to learn and teach myself and her 7 year old sister how to play the game. The tiles are quality and I feel this game won’t easily fall apart. It also came with a blank notepad with additional game and game company branding on it. My wife thinks it’s sacrilege to write on the paper pads that come with games. So Nanolocity Games might want to consider some kind of laminated sheet on which you can keep track of your score. But, either way, I’m hoping the game comes with some sort of writing utensil in order to keep track of the score. It might also be an added touch if they had something with boxes or something to mark for each different match each player gets to make it easier to track our scores at the end.

This Tetris99 Lover in me gives Hexinos a solid 9. Will definitely play again!

Disclaimer: The publisher provided the prototype copy of Hexinos. The opinions expressed in the review are completely my own.

Check it out and back it on Kickstarter before Sun, November 15 2020 11:59 PM PST.
Check out Hexinos and Nanolocity Games on: 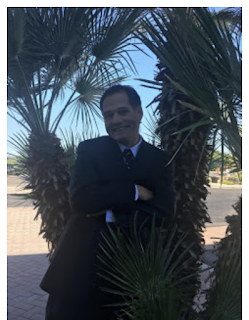