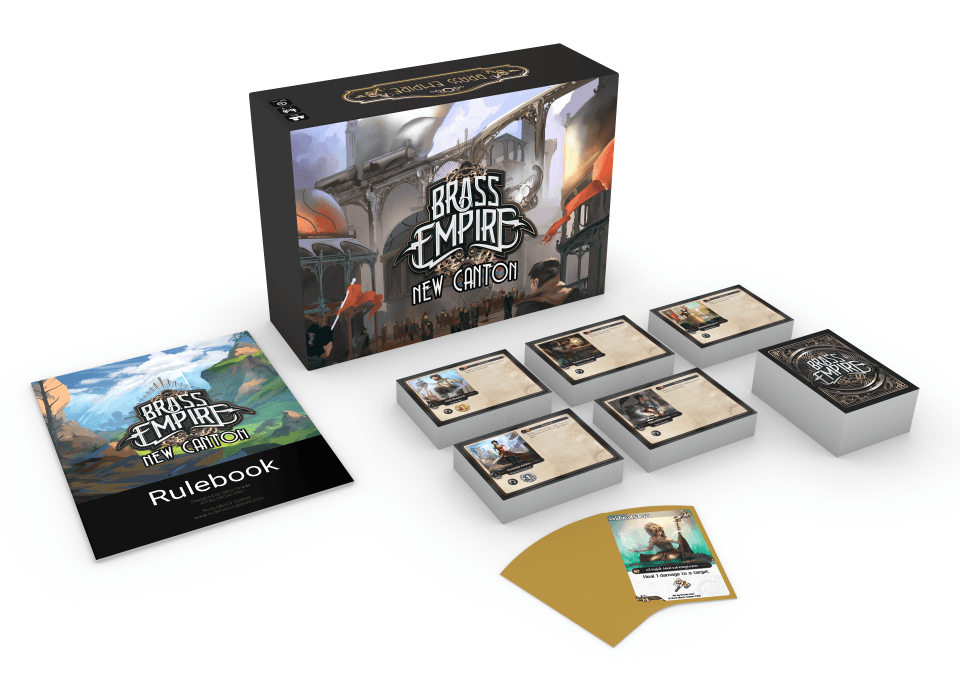 WARNING: This is a preview of Brass Empire – New Canton Expansion. I was sent the base game and a prototype version of the expansion. All components and rules are prototype and subject to change.

Brass Empire is a deck building game with a really nice steampunk theme and art. Each player typically starts with a matching starter deck and builds their deck through purchases throughout the game. Each player’s deck is built of employees, buildings, and units meant to aid in the mining of brass or to sabotage the ability of other corporations to mine for the same brass.

In the base game, each player starts with a deck of ten employees and a supply of resources that only their individual company can supply. These resources need to be purchased, but no other players can purchase them. A draw pile that includes employees and a draw pile of buildings and units are placed in the middle of the table, and six cards from each draw pile are turned face up for purchase. Also, a supply of brass is placed in a “mining pool” depending on the number of players.

To start, players draw five cards at a time and, on their turn, play as many of them as they wish (usually all). Building cards are played face down, as they are “in construction”; units are played face up, but their effect can’t be taken until the next turn, and employees are placed face up. Employees, some buildings, and some units provide two types of currency for further resource purchase: labor and/or construction. These resources are used to purchase from a choice of the twelve available cards that are face up. The purchased cards go into the player’s discard pile, any extra labor or construction that can’t be used is lost, and all employees go into the discard pile. The player takes five new cards from their supply deck and play passes to the next player. When the player’s supply deck is depleted, all the cards in their discard pile are shuffled to create a new supply deck.

Different resources provide opportunities to remove cards from your deck, collect brass, and attack other corporations’ buildings or units. Throughout the game, brass is won, lost, stolen, or destroyed. Once the mining pool is depleted and each player has had an equal number of turns, the game is over. Players count their total brass (buildings, units, and employees also have brass values in your deck), and the player with the most is the winner.

The New Canton Expansion takes the base game and turns the storyline into a much deeper story for each corporation with “choose your own adventure” elements. In the expansion, you play the base game a multiple number of times with more story being revealed over time; certain triggers within the game cause additional actions for both the player’s individual corporations, as well as overall game effects. Each game is scored based on where each player finishes in the game, creating a single “super game.” It is possible to play the super game over multiple sessions. (We are three games in and have no idea what is still coming or how many games we will play in total.)

The expansion also adds the necessary components to play with a sixth player.

Rules and Setup:
If you know how to play the base game, the expansion does not add any complexity to the rules or setup. If it is your first time, like it was for me, I think it makes sense to understand the base game before adding the expansion. The rules are laid out well and more coherent than most review copies I receive.

The game setup is not complicated. There are two main decks: one with buildings and units, and one with employees. These are shuffled, and six of each are laid out. Each player gets their starting deck (which will change from game to game throughout the expansion). The expansion event decks (one for each corporation and one for the overall game) are laid on the table, and players need to know what event triggers reading the next part of the story and the related game events.

Theme and Mechanics:
I don’t know why, but I love steampunk themes. The theme and the story-line go great together in this game.

The deck builder mechanics are not different from most deck builder-style games. The one minor difference from some of the classics I can think of is that you play your entire hand on each turn.

Artwork and Components:
If you are going to have a steampunk theme, you have to do it right. This is done right. Having seen the artist’s work, I’m amazed at how many images are in these decks. It must have cost a fortune in time and money. (Designer Mike Gnade claims, “I do everything but the art. But, I tell them what to draw so that counts for something.”)

The components are good. The card stock is good, the plastic counters are good quality, and the box is strong. I wish there were a few more spaces in the box to keep everything sorted from game to game in the expansion. I did not receive a box for the expansion, so that might be something coming or even a stretch goal, but there are a lot of individual piles to keep sorted between games in the expansion.

The Good:
There is a ton great about this game. The art, the theme, the gameplay, the storyline and on and on. This is a keeper for my house. It’s easy to teach and easy to play, as well.

The Bad:
The only two negatives I would raise are with the expansion. First, the replay-ability of the expansion components. You don’t know what’s coming, and that happens only once. I haven’t gotten all the way through it yet, but I assume there are bigger things yet to come, and I’m sure a second time through might spoil the surprise, especially if playing with new players. It’s a little like reading a book over and over, though, and it’s probably just fine if there are no new players being surprised by the knowledge of everyone else.

Second, although you play multiple games throughout the expansion, the group playing must remain the same. You can’t add or subtract players very easily. You could probably replace players from game to game, but there would be some of the story missing.

Final Thoughts:
We loved both Brass Empire and the expansion. If you like deck builders, this is a Kickstarter project you can’t miss!

Brass Empire – New Canton Expansion is on KICKSTARTER between now and November 30 ,2017
About the Author: