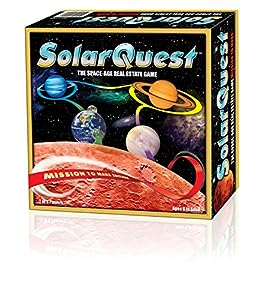 I’ll be the first to admit, I judged this game and hated it before I first played it. With games coming and going as a reviewer, I often judge a game before getting into it. The theme, the art, how well the rules are written, the packaging or quality, and the publisher all create my biases. Usually playing the game confirms my impressions and I write the review.

When I pulled the game out of the box and started looking at the components, I instantly realized that I had “Space Monopoly.” Then I read the rules, “Space Monopoly with a twist.” I wasn’t sold. It took me a long time to actually get it out to play it because I was dreading it.

This time I was wrong. It is better than Monopoly… 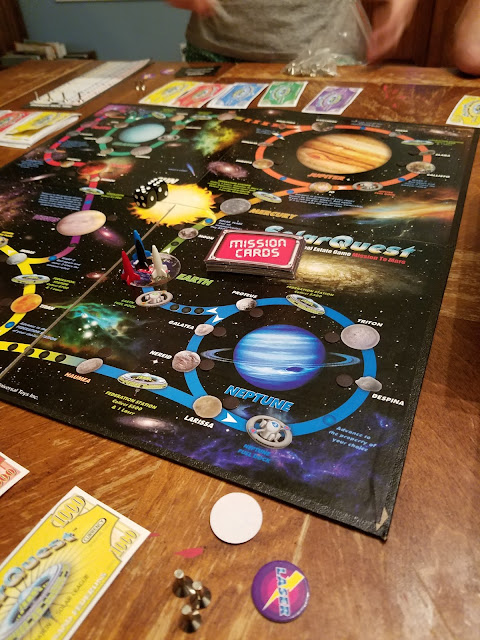 Instead of explaining the whole game, I’ll assume the reader knows how to play Monopoly and I will explain the other aspects instead.

First (and best), there are Mission cards. These cards are kept secret and specify a mission to win the game. For example, one card reads, “Collect all of the dwarf planets.” If I have this mission and accomplish it, the game is over, and I win regardless of how much money I have. You can draw a replacement Mission card whenever you land on Earth (Earth is the “Go” space).

Second, besides money, there is an additional resource component to manage: fuel. Whenever you take off from certain spaces, you must expend fuel. Each player starts with 25 fuel, and you reduce fuel if you “take off” from certain spaces (planets, for example). The amount of fuel used is the number you roll (and the number of spaces you move). There are places to refuel, but it may cost you money. It also becomes possible to run out of fuel and become stranded. If this happens, you are out of the game.

Third, properties come in groups of various numbers. Some are in groups of one and others have five or six. Rent increases for each additional property in a group you own. There are no houses or hotels, but you can add fuel stations on your properties to refill your own ship, for free, or other players’ ships for a cost.

Next, there are certain spaces you cannot land on. Just outside each planet’s system is a series of spaces that you can’t land on. What that means is that you will stay in orbit around a planet until you can roll high enough to get through those spaces to leave that planet’s orbit track.

Finally, there are laser tokens. if you stop within one planet or on the same planet, you can fire at your opponent(s). You expend fuel and a laser token to fire the laser. When you do this, you roll the dice. If you roll doubles, then anyone you hit pays you 100 times the amount rolled. (My son rolled double fives twice and I was out a couple grand real quick). If you roll double sixes while firing a laser, you destroy the player and get all of their money, properties, lasers and unused fuel stations.

The game ends when you complete your mission card or you are the only player left due to bankruptcy, stranded players, or players destroyed by lasers. You can also set a time limit and add up resources to determine the winner.

Rules and Setup:
Since the game is a little deeper than Monopoly, the rules are a little more complicated. Some games have rules that overlap different sections of the rules; this is true in SolarQuest, and I sometimes found it hard to clarify a rule. You look at what seems like the obvious section, but it isn’t there, so you scour all of the other sections to find it. I’m not sure it’s possible, but the rules might be simpler if they were rearranged. It’s all there, though, which is a lot better than some of the games we get as reviewers.

Setup is similar to Monopoly. Each player gets equal amounts of resources and puts their pieces on the board. The starting player is the one that rolls the highest number on the dice.

Theme and Mechanics:
Theme = Space, Mechanics = Monopoly. This section has never been so simple.

Artwork and Components:
The art on the board is pretty good. I think there was a missed opportunity to dress up the Property cards.

The components are a mixed bag, in my opinion. The board is good. The fuel markers are held onto the board with small magnets. This is key, or they would have been everywhere. The fuel board is also magnetic, which is nice. The money is thick, too thick; I always thought I was holding multiple bills, but really only had one. Meanwhile, the Property cards are too thin and feel like they’re printed on cardstock.

The Good:
It is a little meatier and a little less drawn out than classic Monopoly. The board looks good, and there is factual information on the Property cards to add to the learning experience.

The Bad:
Monopoly isn’t a crowd favorite when it comes to most board game groups, but it still is a classic. I thought some of the components could be better, and as I said earlier, rule book organization left me a little puzzled at times.

Final Thoughts:
If you are going to be like Monopoly, it is certainly a good thing to be better than Monopoly, and SolarQuest is.

Players Who Like:
If you like Monopoly and want a little more to it, or a little quicker game with more options, you’ll love SpaceQuest.

Get your copy of Solar Quest online at AMAZON.