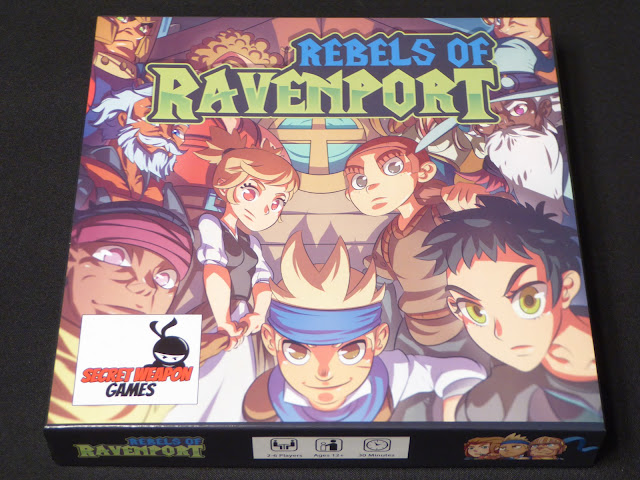 
WARNING: This is a preview of Rebels of Ravenport. All components and rules are prototype and subject to change. We received this game free of charge in return for an honest review.

The town of Ravenport has been overrun by creatures of the dark. The Overlord is gaining power and soon will take over this small seaside town. Will you be able to lead your guild of rebels to defeat this hoard of monsters and restore peace to the town of Ravenport?

In Rebels of Ravenport players take on the roll of Guild Master recruiting a band of rebels to face the monsters of Ravenport gaining fame and fortune along the way. The player who can do this best will win!

Setting up Rebels of Ravenport is straight forward and quick, each player will choose a starting guild (three cards with the same color flag in the upper right corner), receive three fame tokens and one Tome of Influence card. The remaining fame and victory point tokens and dice are placed next to the board in the center of play. The character and artifact cards are shuffled together and set face down on the board in the indicated spot crating the draw deck. Five cards are dealt face up next to the draw deck to create the “store” and the game is ready to begin.

On a players turn she will declare which monster she will be fighting then rolls the three dice and compares the results to the character cards in her guild. For each dice number that matches a number of one of her characters she receive the corresponding attack value. The attack values are added up and if they equal or exceed the health value of the monster, she has defeated the monster and receives the corresponding fame points and victory points. If the player fails to defeat the monster nothing happens and she moves on to the next phase.

Note: other players may earn fame points during this phase if the current player rolls certain numbers, defeats certain types of monsters, or even fails to defeat a monster at all.

Next the player will spend her fame points on purchasing new cards from the “store” to add to her guild. The purchased card is placed into her guild and a new card is drawn from the draw deck to take it’s place.

At any time on a player’s turn she may use her Tome of Influence to discard one of the cards in the “store” and draw a new card to take it’s place.

Once she has completed the above steps play goes to the next player to the left. This continues until one of two things happens. One, all the victory points have been taken from the reserve pile. At which time players add up their victory points (including what is on the cards in their guild) and the player with the most points win. Two, one of the players defeats the Overlord, at which time the game ends and that player wins the game.

Rebels of Ravenport is a super fun and light engine building, dungeon diving, dice rolling game for the whole family. It is a great mix of Dungeons and Dragons meets Machi Koro. Set up is super fast and there are not a ton of rules to get bogged down with so you can get it to the table quickly and dive right in.

The theme really comes through with the engine building mechanic. It is a great feeling as you gain more characters and artifacts to strengthen your guild so you can fight stronger monsters (or at least try to).

The artwork is fantastic! Von Asis did an amazing job and really brings the Ravenport world to life. The graphic design is excellent too, the cards are easy to read and the symbology is very identifiable. All the components are prototype, but also decent quality which is the norm from the Game Crafter.

Note to all game designers: send your prototypes/review copies from the Game Crafter if you want to make a good first impression.

As you can see from above the game play is very simple, but works very well. There are no hiccups and everything moves along smoothly. Players will need to pay attention to what is being rolled and remember the special powers of their characters and artifacts, but once the game has been going for a while that is easy enough. Also the duel paths to victory really keeps players on their toes. In one game I fell behind on victory points and the stock pile was getting low so I threw a hail mary and went after the Overlord (probably before I was sufficiently ready) and defeated him to win the game.

The box recommends 12+ but my 5 year-old was playing with us without any problems and minimal guidance. The game is easy to learn and fast to teach. Most everyone that played picked it up very quickly so turns went fast making the length of most the games under the 30 minute time stamp.

There is some decent amount of player interaction with rolls effecting both the current player and everyone else, similar to Machi Koro. Also the Tome of Influence, and other artifact cards) played at the right time can really hurt other players or help you if there is nothing good to buy from the “store”.

The Good:
Rebels of Ravenport is a solid game and the artwork really jumps out at you. It is a very accessible game that is entertaining and quick to play.

The Bad:
As I mentioned above the artwork is fantastic, I just wish there was more of it and more variety in both the characters and the artifacts as some of the art repeats).

I would have also liked to see more variety in artifact powers, currently there are only a handful and they also repeat. I talked to Mike about this and it will be something they address for the Kickstarter campaign.

Lastly it would be cool to see a lot of different monsters to fight instead of the same seven monsters. Maybe a few dungeon decks levels 1-3 with a boss that is always present to fight. The boss could even change from game to game to add extra variety. In my opinion this would give Rebels of Ravenport way more re-play-ability.

Final Thoughts:
For me and my family we really enjoy Rebels of Ravenport. Although it plays similar to Machi Koro (which we also enjoy a lot) it has a slightly different feel to it due to the theme. This is one that we will definitely be pulling out to play on a regular basis. I am excited to see how it does on Kickstarter and what changes and additions are made!

Players Who Like:
Players who like Machi Koro will love Rebels of Ravenport. It will also appeal to those who enjoy good engine building games like San Jaun and Race for the Galaxy (although it is a much lighter game than either of those).

Check out Rebels of Ravenport on: