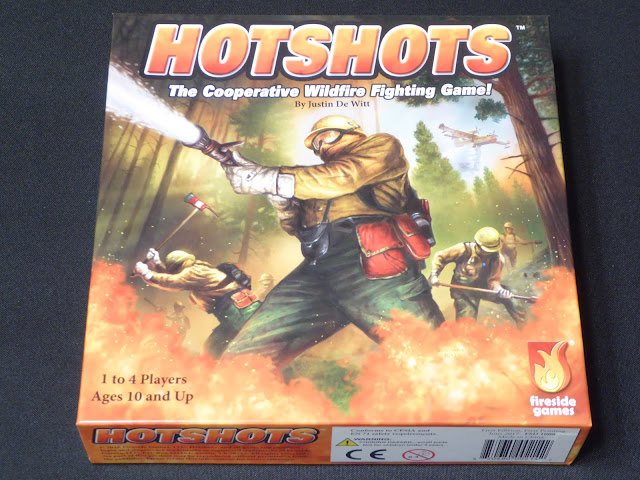 Deep inside the boundaries of Yosemite National Park you and your crew of Hotshots work day and night to contain a fire that has already consumed over 50,000 acres of pristine forest land. The forecast for the coming days is hot, dry and windy, not what you wanted to hear. But you will continue to work your body ragged because this is what you signed up for, trained for and live for. You are a Hotshot!

In Hotshots players will work together to stop a wild-land fire from spreading and scorching too much for the forest that is now ablaze. You will use your special abilities as a crew boss, spotter, swamper, and sawyer along with powerful equipment like Air Tankers, Helicopters, and Brush Rigs to quickly contain and extinguish the fire saving this beautiful land and nearby structures.

To setup Hotshots players will randomly draw from face-down terrain tiles to create a 5×5 circular grid in the center of play. Tiles making up the board should all be face up and orientated the same (IE text facing the same direction). Players will then place the fire break tokens near the completed board along with the reward tokens which are placed face down. The vehicle tokens are placed on the Air Attack Base, and the Wind Flag is placed on the Fire Camp orientated to point to the top of the board. Next players will create the fire deck and place it near the board as well. Fire tokens are now placed out onto the board on specific tiles to create the starting fire conditions. And lastly players will choose a firefighter character and take the corresponding card and token placing the latter on the Fire Camp tile. Players are now ready to begin.

On a player’s turn she will preform the following steps:
1) Move. Movement is pretty straight forward, each player can move two tiles in most cases. There is some terrain types that modify this as well as tiles with fire on them which a player may not pass through.

2) Fight fire. To fight a fire the current player rolls all six firefighting dice trying to match the symbols at the bottom of the tile they currently occupy. For example a tile may contain the following symbols; two firefighters, two chain saws, and two axes. The player must roll at least one matching symbol (to the tile they are on) each time they roll the dice or risk busting and causing a blow up (adding fire to the current tile). For example (using the above required symbols) our player rolls two axes, a rake, a shovel, and two chainsaws. The player sets aside the two axes and the two chainsaws (because those match what is required). The player must now decide if she will roll again to match more symbols or walk away. If she rolls again and does not get at least one fireman she will bust. If she walks away she has four matching symbols and can remove one fire token from the current tile she is on. If she continued to roll and got five matches she could remove two flame tokens then take a fire break OR a reward token. Six matches allows the player to remove three flame tokens then take a fire break AND reward token. Also three matches allows a player to place down a firebreak on the tile they currently occupy adjacent to another. 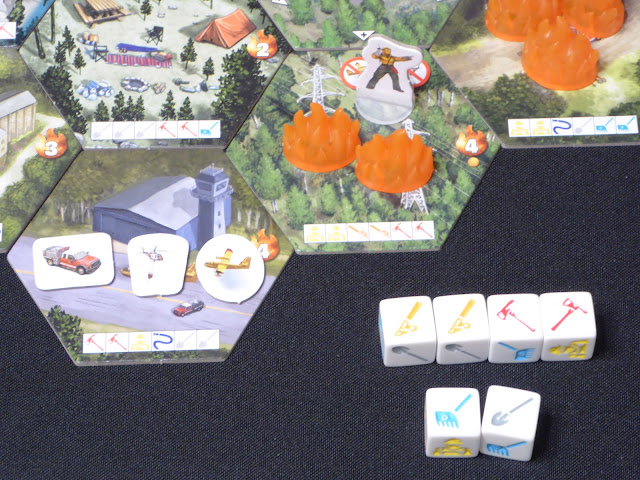 3) Draw fire card. The current player will now draw the top fire card from the deck and follow the directions. The different things that can happen include; increase fire, change of wind direction, wind blowing, strong gust, ember cards, and combinations of these. If a fire increases, due to the play of the fire card, past it’s fire limit the tile is flipped over and is considered “scorched”! 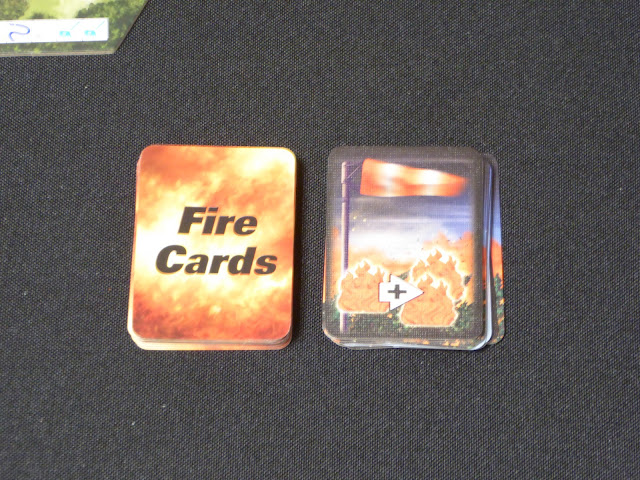 Once the player is done, play proceed to the next player. This continues until one of three things happens.
1) There are eight scorched tiles at which time the players have failed and must go back to firefighting school.
2) The Fire Camp tile gets scorched in which case the players also loose and go back to.
3) If the players successfully remove all flame tokens on the board (before eight tiles or the Fire Camp have been scorched) they win and have saved the park, hooray!!!

This was just a quick overview of play. There are many nuances not covered here like each character’s special ability, the effects of scorching different tiles, reward tokens, and the vehicle token actions (which are so cool).

The rules include variable board layouts and different set up and win/loose options to change up game play making things easier or harder. I thought it would be fun to play a “fire season” playing through all the set ups to see how many parks I could save. There are also solo rules for all my lonely gamer buddies out there!

If you have read any of my reviews in the past you know I am a big fan of cooperative games. I think this is mostly due to the fact that I play with my younger kids a lot and they enjoy working as a team more than the head-to-head competition. We play a lot of Pandemic, Forbidden Desert, Flash Point Fire and Rescue, and Castle Panic to name a few.

So how does Hotshots stack up to these other cooperative games? Well, that is what we are here for isn’t it?

One thing I love about most of the Fireside Games titles are their straight-forward nature. Everything in the rule books are spelled out clearly and the game play itself is simplified without a lot of extra stuff or holes. Hotshots is more of the same. The rule book is very easy to understand, follow along with, and reference if needed. Games are also quick and easy to get set up, so you are able to jump right in and start fighting some fires!!!

I love the wild-land firefighting theme of Hotshots as I have a really good friend that was a Hotshot for years and is still a firefighter to this day. So this theme hits close to home for me. The cooperative game play, push your luck dice rolling, variable player powers, and random AI of the fire cards really tie in the theme nicely. And as is the case with all really good cooperative games the tension in this one can get really high at times.

Another thing that ties the theme and mechanics in is the artwork. The tiles have fun isometric illustrations that create a fun landscape when they are all placed out on the table. The character cards and tokens are realistic and look good when out on the board. My favorite component of all is the fire tokens. These guys look amazing and terrifying when there are a lot of them burning up your park. 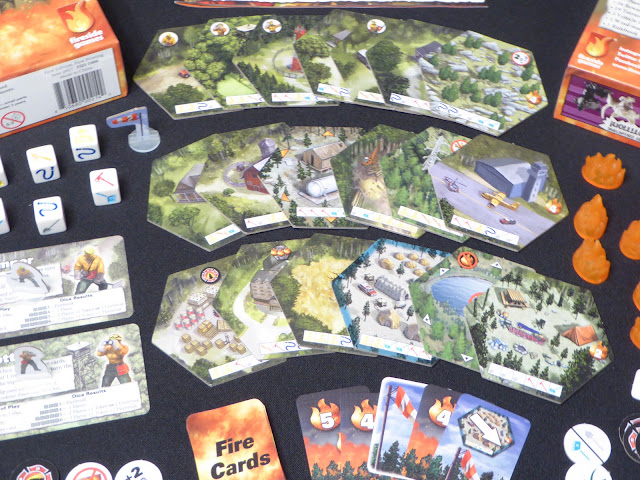 As I mentioned above the game play is super immersive with a lot of emotional swings. Just when you think you have everything under control a big gust of wind will come up and blow the fire over your fire break and into the contained area ruining your well played plans. However there are reward tokens and special vehicles that players have access to (just like real firefighters) on the Attack Base tile—Air Tanker, Helicopter, and Brush Rig—that can really change the tide of the game if used at the right time.

Typical of many co-op games there can be some alpha gamer issues where one player will takes control of the flow of the game. This can be mitigated by assuring that each player makes their own final decision. The flow of the game is quick so there is not much down time. Turns are short and everyone stays invested throughout the game.

The Good:
Hotshots has so many things going for it for me; the theme, cooperative play, tension building, press your luck dice rolling, good artwork, solid components, short playing time, and a ton of re-play-ability. The facts that my kids can play it with relatively little guidance is super cool, the fact that they enjoy it as much as me is even better.

One of the things that has impressed me most about Hotshots is the publisher, Fireside Games. They have been very aware and mindful of the situations happening around our country and have used the launch of this title as a platform to bring awareness and help to those who need it. Please check out their “Remember the Brave” post at http://firesidegames.com/2017/08/09/remember-the-brave/.

The Bad:
There are no expansions! Enough said.

Final Thoughts:
I absolutely love Hotshots and will be playing it until the components turn to dust. Then I will go buy another copy and play it into the ground as well. There is nothing better than getting together with a group of friends or family and being totally consumed by a game for 30 minutes then wanting to do it all over again.

Check out Hotshots on:

Pick up Hotshots at your FLGS or online at AMAZON.