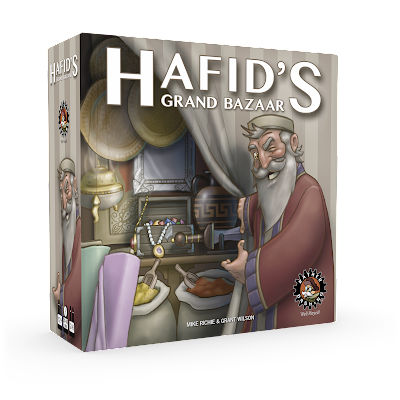 There are many goods to be taken to market; some are plentiful, some are rare, some are valuable, and some are cheap. Some have more value when sold together with a complimentary item. Your job is to find the right goods, the right buyer, and the right time to cash in and become the wealthiest merchant at Hafid’s Grand Bazaar.

Hafid’s Grand Bazaar is a bidding, bartering, and set collection game that will keep you on your feet as you try to utilize your resources and obtain the right combination to win the game.

The resources in the game come in five different categories: textiles, foods, finished goods, raw materials, and livestock.  Each category has a different-colored card, and there are fuve different goods in each category.  For example, livestock has the following goods: horses, camels, cattle, sheep, and goats. These goods are, in order, rare to common, and the value decreases for the more common goods. There are identical values and quantities of the goods in each of the five categories. Because the cards in each category are the same color, players can tell from the back of the card what category the card belongs to, but not the actual good on the front of the card.

The game starts with each player receiving ten goods (cards) from a shuffled deck of all of the goods in all of the categories (a colorful deck, for sure). Then, a hexagon-shaped game board is placed in the middle of the table. Each of the six sides represents a foreign market. Each player also receives six bidding cubes. At each foreign market two cards are placed, face down. The cards are placed so that each cards’ color (category) can be seen.

Players take turns using their bidding cubes in a number of ways: to determine the order and number of foreign markets they can take from, to hiring special helpers to increase the number of goods they can get, and to lure the right type of buyer(s) for the goods they want to sell. After players place all of their cubes, players take the actions of each board location and effectively increase their hand size (quantity of goods). Players can then barter their goods to improve the sets in their hands in preparation for selling to the buyers.

The setup for this game is pretty easy. Ten cards and six bidding cubes go to each player, place the board in the middle, and set up the first round by placing two cards at each foreign market. I’ve never seen a board game with this level of complexity that’s ready to start so easily.

The rules for the game are complete, concise, and look great which made getting started a breeze.

The game’s theme is certainly a little different, but it works. My grandparents lived in Egypt for several years, and they used to tell me about the markets they would go to. The theme is still a little foreign to me, but to many, it might be right on. Either way, the game behind the theme is good, so a thorough understanding of what happens at the market isn’t all that important.

The bid and barter mechanics are similar to other games in the genre. There are enough bidding cubes to get things done, but few enough that you are always wishing you had one more to place on the board. I like the way the cards have different values and quantities to make some more rare and valuable. There was overall good balance in the mechanics, and it makes the game balanced from a player’s perspective all the way to the end. The player count and time frame match the publisher’s recommendation, but I think the recommended age might be older than what I would expect; my 9-year-old did just as well as the older players.

Artistically, the game isn’t going to overwhelm anyone. It seems to be the art style of the publisher (Rather Dashing Games), as other games of theirs I have played seem similar. Although the art isn’t spectacular, the component quality is good. Besides the cards, there really isn’t much more to it, but the board and cubes are of good quality, as well.

The Good:
Those I played with and I just loved this game. There is tempo, strategy, depth, and fun, and these don’t always synergize on a game table. I got one game in with 6 players, and it never lagged, like some bigger player count games do. This works with the family, friends, and new players to the game table. It is easy to learn, and you never feel bored through the entire game.

The Bad:
I am not sold on the theme. I think it will probably work fine for many people, but I think you could theme this in so many other ways that might draw me in better. That being said, everybody I played with had nothing bad to say about the game at all.

Final Thoughts:
As a kid, I loved the card game Pit; this isn’t the same game by any means, but the feel is there. I can’t recommend this game highly enough. It works for seasoned gamers and newbies alike. I have seen a lot of gateway game recommendations, and this is now at the top of my list of unique tabletop games to ease others into the hobby I love so much.

Players Who Like:
The games that come to mind for me are Bohnanza and Pit, but there is definitely other components on the bidding side that remind me of actions in Five Tribes or New England.