This game is a pretty good representation of many neighborhoods around the world.  You hate your neighbors and your neighbors hate you.  The best hope you have of keeping your sanity is by driving them insane until they give up and leave.  As you make them mad, they are sure to do the things that make you crazy, too.  The king of the neighborhood (sort of) is the last one standing after everyone has picked up and moved out.  Can you last? ‘Cause it’s going to get crazy!
In Cul-de-Sac Conquest, you pick the role of one of those characters that everyone has in their neighborhood; Cat Lady, Health Nut, Home Preschool, HOA President, and so on.  Each of these characters have their pet peeves; for example, the day care lady is especially sensitive to Shady Characters, and the HOA President is sensitive to EVERYTHING. As well as their special ways of irritating their neighbors, cat lady brings with her the animal nuisance, while the ex-boot camp sergeant is loud and obnoxious.

Each character has a specified total tolerance to these nuisances and their player have a rage value at which they will move out (or leave the game as a loser).  Luckily there are also house additions/amenities that can be built to calm your nerves as well as wholesome activities to clear your mind and reduce your rage.

After players have selected the character they will play, each player then gets a hand of five cards.  These cards come in four different card types. The first is an annoyance card where you can play it and cause others’ rage meters to go up if a player is sensitive to that annoyance, or the player using the annoyance is proficient at using the annoyance, then the rage result is greater than if they did not.

The second type of card is an upgrade card. This card upgrades your house and temporarily reduces the effects of others’ annoyance attacks. the party animals next door doesn’t bother you as much if you are sitting in the hot tub.

The third card type is a relax card. Things like Yoga can actually reduce the rage level.

The last card type is a self-annoyance. These cards are played immediately upon drawing and increase your rage meter. Stubbing your toe certainly doesn’t help your cause in trying to calm yourself down when the door to door salesman shows up.

Cul-De-Sac is pretty quick to get going right out of the box. The rule book is quick and easy to get through, and even a little funny. It is very solid and complete for all circumstances we encountered. 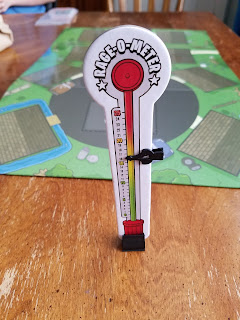 The theme of the game is appropriate for the game style, the take that, Ameritrash game style fits the theme perfectly.

The game mechanics are simple and quick; play and draw cards and keep score (rage).

The game plays true to the manufacturer’s suggestions. The game plays better with more players than less. We played three players which was significantly quicker than our 7 player game, but both fit in the time frame of 30-60 minutes. I feel the age range is appropriate, not for game mechanics, but more for content.

The game art is pretty funny and works well with the theme. The game components were of good quality. One of the things that bothered me (quite a lot) was the game board. I think the board was a Kickstarter stretch goal (which means the game had a lot of backers), but it is completely useless, unimportant to gameplay and a waste of space and materials. If there is an expansion that would utilize the board someday, it should be part of the expansion, not the base game.

The Good:
I am going to go with the art and the humor. The game really is funny, although the humor is a theme component and unrelated to gameplay, really.

The Bad:
Honestly, I am not a huge fan of the direct conflict, take that in this game. It is not my favorite genre, to begin with, but it really made this game weak for me. The game board obviously fell into this category for me as well. 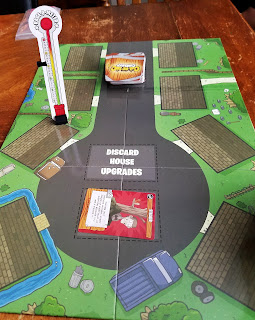 Final Thoughts:
This game feels really shallow to me. For the effort and time you put in to play this game, I wished it was a little deeper. I am sure this game would work really well for some groups, but not with my groups.

Players Who Like:
I think this would be a great group game for those looking for a lighter take that experience.