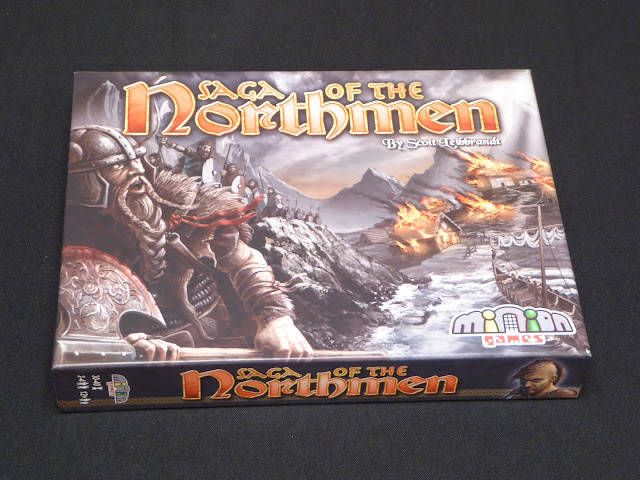 In the Dark Ages mighty warriors from the North left their homelands of Scandinavia to spread fear and destruction across the countries of Europe. Plundering, creating strongholds, and developing systems of trade these Northmen where able to establish a strong foothold in these war-torn countries.

In Saga of the Northmen you will take command of one of these clans from the attempting to gain control over the seven major kingdoms, plundering and looting the others, and creating trade routes to build your fortune. The player who can do this the best over three rounds is the winner!

At first glance Saga of the Northmen can look a little bit overwhelming. There are quite a few cubes, tokens, and cards greeting you as you open the lid. Once you know what they are all for your nerves can settle back down and you can enjoy the ride.

Set up is very straight forward and quick (again once you know what everything is for). First the board is set in the center of play then each player takes a set of colored cubes (the player’s general supply), three leaders tokens, a time token, and an infamy card of a single color of their choice. Players then take a certain number of their cubes (from their general pool) and  place them on their infamy card (this is determined by the number of players). The gold plunder tokens are separated into three stacks of fifteen (used as a timer for the game) two of which are set aside until later rounds. The influence cards are shuffled and each player is dealt six face down, then three are dealt face up next to the board as a common draw pool for all players, and the remainder are placed face down to make up the draw pile. Finally the trade route cards are shuffled and each player is dealt two with the remainder being placed face down as a draw pile.

Saga of the Northmen is played over three rounds, each consisting of three player turn phases as follows:
1) Rally Phase. In this phase the player will choose an influence card from her hand to play. It is placed face up in front of her (on top of any previously played influence cards) and she then places a number of her cubes (from her general supply) equal to the number on the card (she just played) into the country depicted on the front of the card (and written on the top). A plunder token is then added to the neutral country listed at the bottom of the card.

For example Player A has played a Saxon card with the number “2” on it and “The Holy Roman Empire” at the bottom. This player would then add two of her cubes (from her general supply) to the Saxon location on the board and one plunder token to The Holy Roman Empire location.

After placing her cubes into Saxon she may choose to pay three cubes from her infamy card (back into her general supply) to place a leader token into Saxon as well.

Once done the player will draw an influence card from either the common pool or from the top of the draw pile. Play then goes to the next player. This continues until all fifteen plunder tokens have been placed onto the board. Players then move on to the next phase.

2) Marching Phase. In the first part of this phase players will ascertain who has won influence in each country. This is determined by the number of cubes each player has in a particular country. If only a single player has her cubes in a country she wins that country with out a bettlw. If two or more players have cubes in a country the winner is the player who has the most. If there is a tie the player with the most leader tokens in that country wins. If there is still a tie the player closest to the first player token (going clockwise) wins.

Players who have cubes in countries they didn’t win take them back and add them to their infamy card. This is a great way to build infamy back up which can be very valuable in later phases and rounds. The player who won the country will leave her tokens on the board for the next part of this phase.

Players now move the cubes they have on the board from the country they are in to any adjacent neutral countries they would like to “plunder”. This is done in order according to the chart on the upper right hand side of the board. For example the Normans go first, the Ruses next, … and the Norwegians last.

So going back to our example above. Player A who played an influence card for Saxon has won Saxon and now has her two cubes sitting there. She can now move those cubes according the the influence card she played for Saxon, in this case it was a navel card with the value of “2”. She may move up to two of her cubes according to the navel movement rule which is to any country adjacent to the sea. The infantry movement rule is to any adjacent country.

A player may delay her movement by paying five cubes from her infamy card (back into her general supply) in order to place her time token onto the order chart. This means that her movement is skipped until all other players have gone. The advantage of this is it allows the player to see where her opponents are going to move before she commits her troops.

Once all players have moved their cubes any countries containing more than one player color is resolve in the same fashion as the influence battles. The players that has cubes remaining on the board at this time collects the plunder tokens in their respective countries.

3) Planning Phase. In the planning phase players can spend cubes from their infamy card (going back into their general supply) to purchase more trade routes or to hold influence cards in their hand from the previous round. The remaining influence cards are added to those of the draw pile, discard pile, and community pool, reshuffled and re-dealt to the players.

Once the round ends the first player token is passed to the player on the left and play proceeds as outlined above. If it was the end of the third round players will now add up their points to see who the winners is. Points are calculated by first determining who has the highest infamy total. That player will receive points equal to 1 + the number of trade routes she has completed during the game. Players then add up the point totals from their trade route cards and the number of plunder tokens they have. The player with the most points wins!

Saga of the Northmen is very intriguing as the game play is broken up into different phases that each play a little different from one another, going from a Euro style game to almost Ameritrash (BTW I hate this term).

In the first phase players are collecting cards and playing them in order to gain majority in the seven major countries, which feels a lot like Ticket to Ride (TTR) and Thurns and Taxis. The other interesting thing in this phase is paying attention to where the plunder is being placed and where you are in relationship to it. For example if you are playing a lot of cards that add plunder to the Holy Roman Empire you better make sure you are near enough and strong enough to attack there during the Plunder phase.

The end of the first phase and the beginning of the next phase are all about area control, very much like Risk (without the dice rolling). Players are vying for control over the main countries and then over the neutral countries in order to plunder.

The final phase hearkens back to TTR again where players are resolving their trade routes, again a very Euro game mechanic.

I love these mechanical combinations as it makes Saga of the Northmen very unique in the realm of gaming. It feels fresh and different which is always a plus in my book. Saga also plays very quickly (30-40) minutes and can be played with a wide age range making it easy to hit the table.

The viking theme, which is very popular among game designers, fits really well with the chosen mechanics and artwork. Although the theme seems to be have been done a lot over the past few years I still rather enjoy it especially if it is unique and different like Saga of the Northmen. On the table the game looks small but impressive giving it a feeling of a much more complex and longer game.

As I mentioned above the artwork works well for the style of play and the genre. William Bricker did a wonderful job carrying the look and feel throughout the game which will appeal to many gamers. Component wise Saga is great, the cards, board, tokens, and other parts are are all top notch which is what we expect from Minion Games.

I have to be honest here, when I first received Saga I wasn’t sure it would be one that I would keep. Although the artwork is beautiful it isn’t a style I am generally draw to, then when I opened the lid and saw the components I was concerned even more. However the moment I started playing I knew it would be a keeper. There are so many great things going on in this game from the unique game phases to the fantastic pace of play.

My one gripe is the rule book. It takes a bit to dig through to get the information you are looking for and when you do find it, it can still be a bit vague. For example I am still not 100% sure if you have to have a troop in the starting and finishing country of your trade route cards. It seems too simple for it not to be the case, but not clear enough in the rule book to be definitive. I am sure all my questions can be resolved by asking the publisher or referring to Board Game Geek.

All in all this is one of the better games that I have reviewed over the past couple months as far as total game play feel. I love the fact I can play it with my family and will be able to easily teach it to my friends and neighbors. Saga will definitely be finding a home on my shelf and will see a lot of play over the years.

Players who like the viking theme, Ticket to Ride or Thurns and Taxis will really enjoy Saga of the Northmen.

Check out Saga of the Northmen on:

Get your copy of Saga of the Northmen at your FLGS or online.