WARNING: This is a preview of Night Clan. All components and rules are prototype and subject to change.

Night Clan is the English version of a 2014 Japanese game. It is a deductive game with area control and worker placement mechanics that lead to a very deep strategy-based game. Each player is trying to hide their daughters and riches from the trolls that wish to come and take them away.

Each player starts with 13 identical cards (colored for each individual player). These cards are shuffled and placed in a draw pile in front of each player. “Place” cards are placed in the middle (2 for each player) and players will vie to control these areas to earn victory points in the game.

Each player draws the top three cards into their hand. The first player goes and places two cards onto one or two of the Place cards in the middle. Each Place has a maximum number of cards that can be played on it. (The total maximum equals the number of cards in play, so each Place will be full when the last player has gone.) The first player then draws two cards from their draw pile and the next player goes, placing two cards as well. This continues until all of the cards are played, with players only playing a single card in the last turn.

Once all of the cards are down, the scoring begins. The player with the most cards on a Place wins the victory points collected there. If there is a tie for most number of cards, no one earns victory points at that Place. Next, if there is a Troll and no Mistletoe (or more Trolls than Mistletoe), all points are lost at that Place. If there are no Trolls or Mistletoe equal to or greater than the number of Trolls, then the card values are added up and awarded to the player who controls the Place. The most victory points wins the game.

The instruction book for this game did not come with it. I received a PDF and it appears well-planned and is easy to follow. I needed to keep it nearby while playing, because as different situations played out, there was generally a rule tied to that case.

Setup was easy, as well; choose the place cards based on the number of players and lay those out while players shuffle their own decks.

The game has a whole story about a duke who needs to hide his daughters from trolls, but it seems to me that the theme, although well-thought-out and neat, doesn’t really seem to be important to the game itself. The game play definitely follows the theme, but the theme feels a little disconnected from the game play itself.

The mechanics of the game are good. I like how players can see other players’ strategies partially and can try to play their own strategies or intentionally deceive others. While it would seem counterproductive to play your own troll on a place you are winning, it is a deceivingly good way for others to try and move that card and accidentally mess up their own game plan. For its ease of play, this game is deeply strategic.

The game plays very true to its time, age, and player predictions. We found that every game we played fell within the 10-20 minute time frame. The game plays really well at the 2, 3 and 4 player versions. I think it’s rare to find a game that is balanced at all player counts. The age suggestion also seems to be dead-on.

The art is the highlight of this game. If you like the Japanese art styles on the cover, you will love the look of this game. The game overall feels a little dark in the coloration, but that fits the theme and seems appropriate.

The cards are of high quality and it was delivered in a beautiful compact box.

The Good:
The game is great for those who like a lot of strategy and a lot of direct competition. The art is beautiful and the components are solid. This is a great filler game that brings some serious depth with it.

The Bad:
I’m not always a huge fan of 15 minute super strategy games. This is a game that looks a little too light and feels a little too heavy. The game is solid and everything that is necessary for a good game is there; it just didn’t quite connect for me. (I imagine there is a HUGE group of people out there that will love this game, though.)

Players Who Like:
Stratego, Stone Age, Chess, War all wrapped into one? I can’t single out any good similar games, but it certainly feels familiar even if you haven’t played anything like it. 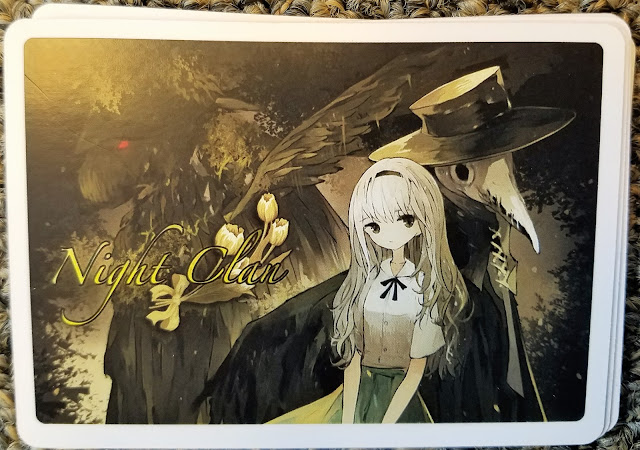 I am giving Night Clan 7 out of 10 super meeples.
Check out Night Clan on: