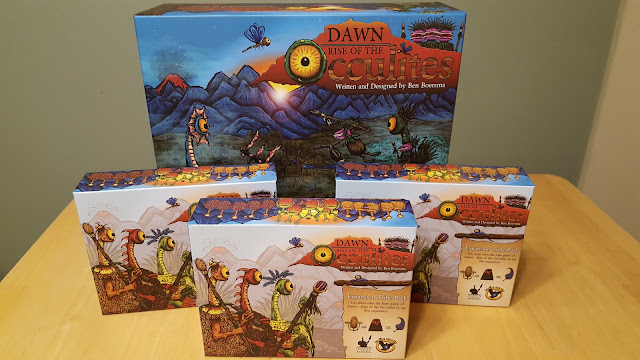 We were sent a copy of Dawn: Rise of the Occulites from Eagle-Gryphon Games in return for an honest review.

It’s April 1982 in Australia, and a young boy by the name of Darwin has discovered something unusual in the “bush” around his Grandfather’s house—Occulites (or so he calls them). Occulites are small creatures with a long single eye stock protruding from their bodies, reminiscent of a snail’s eyes (only singular).

There are many different types of Occulites, some with fur, others with webbed feet and fins, and even some with wings. Each type seems to stay together in a sort of tribe, working and living together. Darwin has even witnessed that these tribes will occasionally fight one another over food, resources, and their precious Sungems.

These strange little creatures live in a hidden world called Crespusculum that can only be seen through small portals that link our two worlds together. In addition many other odd creatures share Crespusculum with the Occulites making existence for these little guys even harder.

Dawn: Rise of the Occulites is a skirmish style board game that chronicles the early years of the Occulites existence, when they were small in number yet big at heart. Your job is to lead a tribe through this evolutionary journey gaining new traits and abilities that will eventually help them to grow and flourish.

There are many, many ways to experience Dawn: Rise of the Occulites, however I am going to keep my overview simple so you can get a good idea of how it plays with out getting confused by the more advanced rules.

Set up for the core game of Occulites is pretty straight forward. First players will choose which scenario they would like to play. Once chosen players will place the board in the center of play along with the Natural Selection deck, both of which are set up based on the chosen scenario. Players then choose their Occulite tribe and will take the corresponding tribal board, tribal figures (placing them on the board as instructed), and five tribal tokens. Finally players determine who has the “upper hand” (based on a card draw from the Natural Selection deck) then each player is dealt seven Natural Selection cards to make up their starting hand.

There are several ways to customize the game play of Occulites, one of which is the custom Tribal creation which happens during the set up. Although not mandatory, players may create their own Occulite tribe by preforming five Evolutionary Adjustments (I.E. changing the base Genetic Blueprint numbers). For example all Tribes start out with the same Genetic Blueprint numbers of; Awareness – 2, Speed – 6, Attack – 4, Defense – 4, and Health – 5. If someone wanted to modify their tribe they can take away one point from one stat and add it to another. Like taking 1 from your speed and giving it to your attack. That would count as one Evolutionary Adjustment.

Natural Selection Cards are at the heart of this game and are used for multiple functions throughout. At this stage they are used for the activation number which is found in the center red bar on the left-hand side near the small Occulite illustration. This number indicates how many Occulite characters you can activate this turn, typically 1,2, or 3.

Once activated an Occulite can take a number of actions equal to it’s Awareness number (which is 2 in the core game). Actions can include:
a) Move. An Occulite may move a number of spaces equal to it’s Speed number.
b) Break Away. This is where a figure may attempt to move away from another figure it is engaged with (IE adjacent to).
c) Attack/Charge. Where your Occulite is either moved adjacent or is adjacent to one of your opponents Occulites.
d) Ready. Draw extra cards from the Natural Selection deck before defending against an attack.
e) Replenish. Simply take an action to draw back up to seven cards from the Natural Selection deck.
f) Stand up. If your Occulite was tripped or knocked down you may use an action to stand them back up.

Although these steps may seem like a lot it is pretty easy to do once you get the hang of it. Now as mentioned above the Natural Selection cards are used for a lot of different things and combat is one of them. On most cards, besides the activation number, there is an attack number, defense number, and special effect text. A card can be used for any one of these things (along with the activation), but once it is used it is discarded. The only exception to this is if a player chooses to play a tribal token in order to play the card effect after the card has been played for an attack or defense.

Once a player has finished his turn play goes to the next player who takes the same steps as above. This goes back and forth until the end scenario condition has been met at which time a winner is crowned. There are many different winning conditions so whom ever achieves those conditions wins!

Dawn:Rise of the Occulites can be played as stand alone missions or as a campaign.

In the late 90’s I picked up a little game called Warhammer. I was in love with the miniatures and the idea of having epic battles on my tabletop. After a while it became very apparent that these epic battles I had playing in my head over and over were never going to be realized on the table. The rule books were thick and the game took hours to play, this was time that I just didn’t have (nor do I to this day). Later I found Heroscape a lighter version of a tabletop skirmish style game. Set up is fast, rules are light, and games generally get over quickly. Much later (a few years back) I was introduced to X-Wing. Although the rules are a bit more involved than those of Heroscape, I still really enjoy the fast pace of play and low learning curve. I was able to get the feel of epic battles without having to spend my day achieving it.

Enter Dawn: Rise of the Occulites, another tabletop skirmish game. Although the rule book is thick, mostly due to the number of scenarios included in it (18), the game is straight forward and fairly easy to learn. Once you can wrap your head around the different uses for the Natural Selection cards you are set.

The designer/creator, Ben Boersma, has also made it easier on players by chunking out the rules. There is a core set of rules that are only five pages long which someone could easily use to play all the scenarios. Then there are layers of add on rules to give the game more depth; Advanced Combat, Advanced Actions, Tribal Creation, and Advanced Terrain to name a few. This is great because players can choose how invested they want to be in the game or grow with the game over time.

The STAR of the game (mechanically) is the multi-use Natural Selection cards which brings in an interesting twist to a tabletop skirmish game. Players have to really pay attention to which cards they play and when. Is it better to use a card for the activation over the defense value? Or is it better to use the card’s special effect? It also amazes me how many cards can be gone through during the course of a game considering you start out with over 100 cards in the deck.

Once we got the hang of it we found we could play one of the scenarios in a little over an hour. Also my boys were able to quickly pick up on the different uses of the Natural Selection cards so I wasn’t having to tell them what to play each tuen. Unfortunately my 10 year-old ended up beating me!

Dawn: Rise of the Occulites is one impressive looking game. From the box it comes in, which is not small, to the awesome looking (although a little strange) Occulite miniatures. I had the privilege of receiving a pre-painted version which is stunning to say the least. The artwork, done by Ben as well, is consistent throughout the game and very fun, he really makes the world of Crespusculum come alive!

I can tell Ben has been working on this concept for many years as the story line is deep, interesting and adds so much to the game play. He even has a journal from Darwin himself on his website that describes the discovery of the Occulites and their world.

As you can see there is a good variety of tribes you can play and each one has it’s own unique attributes and traits which give them different advantages. On the same hand Ben has done a terrific job of balancing these attributes so one tribe is not overpowering.

One glaring issue I see with Occulites is the price tag. The non-painted version is roughly $130 and the painted version can be over $200 (if you can find them).

Considering that the price tag is the only potential down side of this game I think Dawn: Rise of the Occulites is destined for many great things. The ease of entry and speed of play will attract many players who may not consider playing skirmish style games and the depth of play, when you add on some of the layers of rules, will be very enticing for many seasoned skirmish game players looking for new experiences. No matter what level you are at the look and feel of the game will have you hooked the moment you take hold of this Mammoth box.

Players who enjoy Heroscape and other tabletop skirmish style games will love Dawn: Rise of the Occulites. Although a bit on the expensive side you can definitely get your monies worth if you play through all the scenarios and really get into the background and story of the Occulites. 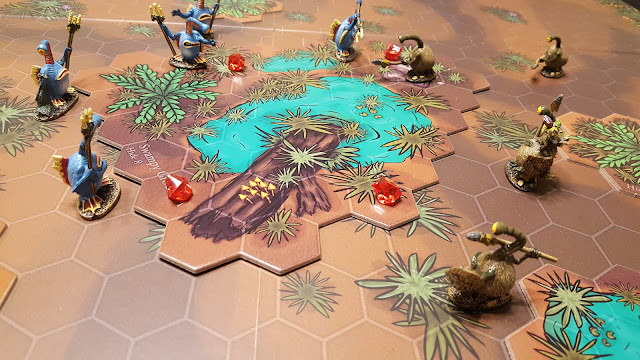 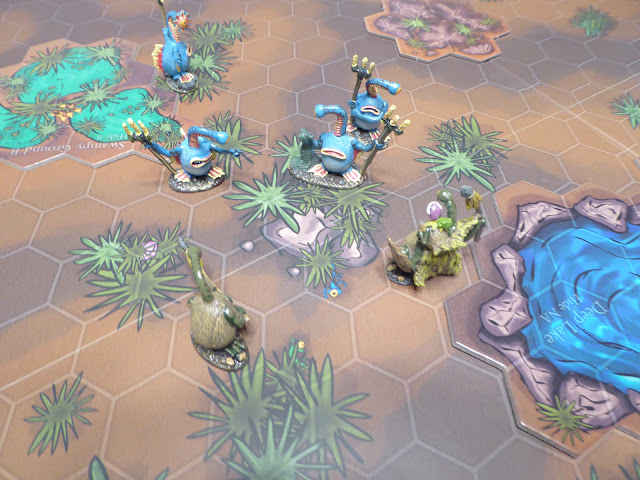 Check out Dawn: Rise of the Occulites on: