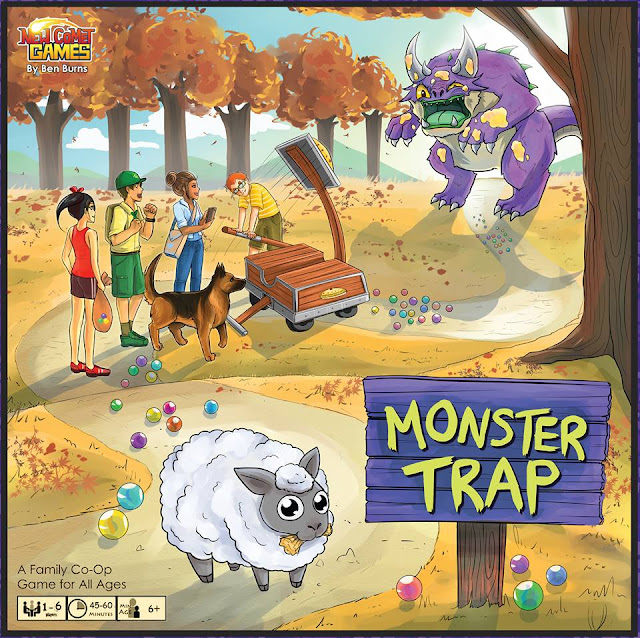 WARNING: This is a preview of Monster Trap. All components and rules are prototype and subject to change.

What does a friendly monster eat for lunch? Sounds like a bad joke, but the answer isn’t that funny. It’s Farmer Brown’s sheep, and you and your friends are trying to stop him from getting another one.

In Monster Trap you play the role of one of these friends (or their trusty dog, Charlie) and try to set traps in the monster’s path to discourage him from taking the sheep.

Monster Trap is a family cooperative game played with up to 6 players. In each round players take turns consisting of; moving around the board, collecting resources to build various traps and setting traps for the monster. These turns take a lot of thought as some traps are placed earlier in the monsters path while others work better later on.  After each round of play (all the player’s turns) the monster moves one step closer to the sheep, and an event card is drawn which usually benefits the monster.

Depending on the number of players, you must get the monster to trigger a certain number of traps to win the game (playing with four players the monster needs to trigger three traps for the team to win). With each character having unique abilities, traps being able to be modified, and a conveyor belt that constantly moves resources in and out of the game, Monster Trap is different with every play. 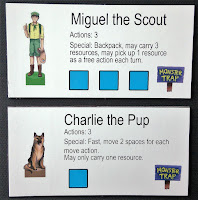 The rules are clear and setup is easy.  As you play more and more you start to discover the unique abilities of some of the characters and how you might combine them with other players to give you an advantage. Since the game is scale-able, we needed to constantly refer to the rules to determine how many of this or that to use in the game with that many players, however this did not bog us down. 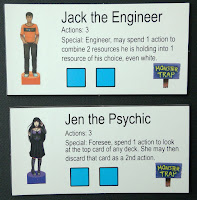 The theme is sort of a funny thing to me.  This monster is friendly, but steals the farmer’s sheep. I don’t usually consider people who steal, or monsters very friendly, but it isn’t my make believe world. The interesting thing is that with the players I played with (my kids), it worked and my kids loved it.

I also am a fan of coop games. They make it easy to bring a newcomer in or play with a younger child. That last part goes out when the theme is more adult. The game was appropriate for the younger crowd, but still difficult enough that those of us trying to use a little strategy stayed engaged.  I think we ended up only winning about 20%-25% of our games while using the simplified rules.

The game plays pretty true to the labels on the box. 1-6 players with 5 being the base game for balance. Modifications were needed for more or less than 5 players. 45-60 minutes was our general game time, with the first one taking just a little longer at 75 minutes. I haven’t tried solo play, but I could see that being quite a bit quicker. The age recommendation of 6+ is spot on if they are playing with older players as I couldn’t see a 6 year old playing solo.

The artwork was solid for the game. The colors and pictures were similar to those you’d find in a child’s story book, which also helped keep the game at a family level. I’m sure many of you reading this would love to see a cool, scary, evil looking monster, but the current monster worked just fine for my seven year old daughter.

The components are good quality. The cards are just the right thickness, the character boards were thick cardboard (a place where a Kickstarter stretch goal could be nice) and the resource cubes were what you’d find in most other games.

The Good:
This game is great for my family. Sometimes in other games my kids walk away from the table feeling like someone took advantage of them or intentionally took them out in a game. The coop style of Monster Trap is a great way to introduce kids to deeper games and keep them engaged. It is also deep enough and difficult enough to keep us big kids coming back for another chance to save that sheep.

The Bad:
I worry about the theme and artwork in this game among the larger gaming community. Most of the gamers that tend to like the deeper games generally like something with a little more blood and meticulous art work.

Final Thoughts:
This is a great game! Family gamers should find a way to bring this game to their kids and it will keep you hooked too.

Players Who Like:
Players who like coop games like Pandemic, Forbidden Island, and Forbidden Desert will love Monster Trap. The former co-ops are easy comparisons, with winning this one being just slightly more difficult.

Check out Monster Trap on: