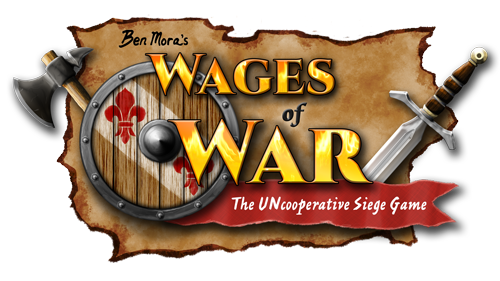 WARNING: This is a preview of Wages of War. All components and rules are prototype and subject to change.

You and your men have been deployed to lay siege to a nearby castle, but in a weird twist of fate there are three other armies preparing to do the same thing. Can you out maneuver your opponents in order to get the most spoils?

In Wages of War players take control of rival armies all laying siege to the same castle. Players will construct siege tents (encampments) in five different encampment areas around the castle in order to gain resources, recruit soldiers, build weapons, and attack the castle! The player who can do this the best will win the game!!!

To set up Wages of War players place the main board in the center of the player area. The weapon and siege equipment tiles are separated out and placed in their own stacks next to the board along with the six different Action tiles along the bottom of the board. The Soldier, Casualty, Money, Ore, and Wood tokens are placed near the board as well. Each player then takes a player board, ten Siege Tents (Encampments) of their color, The General token of their color, seven Soldier tokens, and seven Money tokens. Next four Tower tokens (2 one’s and 2 three’s) are placed on their corresponding tower location on the board. The remaining Tower tiles are shuffled and placed face down next to the board to create a Tower draw pile. Lastly the starting player is given the General Standee.

Wages of War is played over several rounds consisting of each player’s turn. On a player’s turn he will select one of the following six Actions by taking the corresponding Action token and placing it in the location of his choice.

1) Build Encampment. When chosen a player may choose one of five locations to build an Encampment paying the cost in soldiers equal the the locations number. For example to build in location 3 it costs him three soldiers.
2) Earn Wages. When this action is selected the player chooses which location to play it in then gains one coin for each Encampment in that location. For example Player 1 has two Encampments in location 3 and plays the Earn Wages action to that location thus earning two coins.
3) Gather Resources. Similar to the Earn Wages action players can gather resources based on the number of Encampments in the location the Action token is being played. For example Player 2 has three Encampments in location 1 and can take one stone or two wood three times. Players can also pay two coins to do this action.
4) Hire Soldiers.  Like the previous actions a player may hire soldiers equal to the number of Encampments in the location the Action token was played. Soldiers may also be purchased for two coins.
5) Purchase Weapons. This action works the same as the previous ones with players being able to build weapons equal to the number of Encampments in the location. As with Hire Soldiers and Gather Resources players can pay two coins to build weapons. Weapons and siege engines all have their own cost of wood, ore, and coins.
6) Attack! A player may choose to attack the castle on his turn by choosing any of the locations to play the Action token and then choosing any side of the castle to attack by placing his General token on one of the four corners. Attacks are resolved by comparing the attack value of the different units on the field of battle with that of the defending towers. If the value is equal to or higher than that of the tower it is defeated and can be claimed by the player. Meaning taken by the player as victory points for end of game scoring.

Ranged attacks are resolved first, followed by melee attacks, then casualties are calculated. Ranged attacks are preformed by all of the current player’s bowmen, trebuchets, and cannons.  For example in a ranged attack Player 1 has one bowmen (attack value 1) and one cannon (attack value 2). The adjacent towers (to the general and location) have a defense value of three and four. Player 1 decides to use all his ranged units (attack value three) to attack the three defense value tower claiming it and putting it face down in his playing area.

Melee attacks are preformed by adding up the current player’s axemen and swordsmen attack values, adding any siege tower bonuses, and comparing that to the sum of the two adjacent towers defense value. If the attack value is higher the player can claim both tower tokens and a center bonus token. If not then the attack is unsuccessful and the player claims nothing.

Finally casualties are calculated. The number of casualties a player will suffer is calculated by adding the values of the two towers that are opposite of where the General token is placed. For example Player 3 has defeated the towers adjacent to her General token and now must add the defense value of the two towers opposite of that location (five) and take that many casualties. Casualties are taken by removing first any Soldiers on your player board that have weapons and second any regular Soldiers equal to the number of casualties. In this case five. If the player does not have enough soldiers they must take casualty tokens equal to the number they don’t have. These are used as negative points at the end of the game.

When a player chooses one of the above actions they also receive a bonus action which is listed under the primary actions. These typically involve taking more of the same action. Once the player has resolved the action and bonus action the next player will follow the same action but not receive the bonus. This continues until all players have followed the action at which time the next player will choose an action to take from the remaining Action tokens. Then each player will again be able to follow that action. Once each player has had a chance to choose an action (and everyone has followed) the round ends and the General Standee gets passed to the player on the left.

Rounds continue in this manner until the Tower draw pile is depleted at the end of an Attack action. At which time players count up the points from the Tower tiles they have claimed and then subtract one point for each casualty tile they have. Players also add one additional point per Ranged strength they can exhaust. The player with the most points wins!!!

The premise of Wages of War is hilarious (although probably not meant to be); multiple armies all showing up at the same castle to lay siege to it at the exact same time. Imagine the anarchy. While the idea of the game may be a bit funny Wages of War has some seriously good game play!

The game takes about an hour to play and can accommodate up to four players. I found that the higher player count made for faster “building up” each round and a faster game overall. The suggested age range is 12+ which is probably a pretty good mark unless you are willing to help younger players with the strategy. I found that my 7 and 9 year-olds could easily grasp the mechanics but had a harder time with figuring out their best options each turn. That being said I will definitely be playing it with them again. Set up can take some time the first couple times you play as there are a lot of components to prepare, but never fear good organization can help stream line it. Here is hoping for a good insert.

Wages of War has a lot of cool stuff going on in it mechanically. The first thing that jumps out at me is the action selection mechanic where one player chooses an action and all the other players get to take the same action. The benefit for the player who chose the action is that they get a bonus action which the other players do not get. This reminds me a lot of Puerto Rico and San Juan which is a great thing because it keeps all the players engaged on every turn.

The next cool mechanic is the engine building. At first I didn’t see it, but as I played it again over the weekend I could see that placement of your encampments worked much like engine building since most of the actions are based off of how many encampments you have in a location. For example if you have one encampment in a location and you play the Earn Wages action you will receive two coins (one for your one encampment and one for the bonus action). Now if you had three encampments you could make six coins. It can all add up really quickly making for a faster second half of the game.

It also has a good amount of resource management to it as there are four main types of resources including; wood, iron, coins, and soldiers. The soldiers are the most intriguing as they are used for building new encampments, equipping for combat, and taking casualties. It becomes a fun balancing act trying to determine how to use these little guys.

Finally I love how the battles are handled by resolving strength totals for both the ranged and melee attacks against the castle tower’s defensive value. It made it more strategic when planning your battles by not having to worry about bad dice rolls. That being said your army could easily get taken out if the towers on the opposite side end up with high defensive values. The fact that you aren’t fighting one another also adds to the uniqueness and charm of this game.

The artwork for Wages of War is solid and does a great job of capturing the mood and theme of the game. Ben is a one man show on this one doing both the game design and the artwork, and has done a pretty good job of it.

I can’t speak on the components of Wages of War as everything I got was prototype materials, however it reminded me a lot of the prototype of New York 1901 I received. Both were made with great care and you can tell a lot of time was spent making things just right. If that is any indication of how the final product will be treated I am guessing the end components will be amazing.

This game is a hit for me. It uses a lot of fun mechanics that I love in a way that works really well. The game isn’t overly long and seems well balanced, which leads me to believe a lot of time and consideration was put into it.

I can see this as a “gamer’s” game and a good gateway game that will appeal to a wide range of players both age wise and preference wise.

Wages of War is a fun and exciting race to siege the castle game that uses a great action selection/follow mechanic combined with resource management. This is a game I see coming back to the table time and time again. I am excited to see what Ben does with the Kickstarter campaign, as I imagine this already great game will just keep getting better!

Players who like action selection games like Puerto Rico and San Juan combined with a solid medieval theme will love Wages of War!

I am giving Wages of War 8 out of 10 super meeples.

Check out Wages of War on: