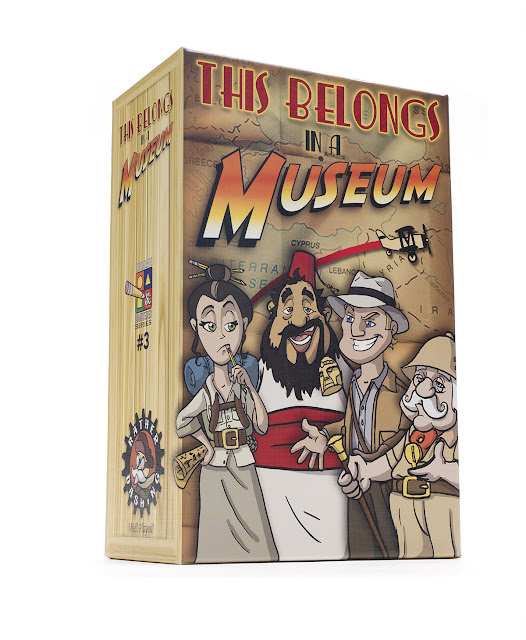 As a child I wanted to be an Archaeologist. I thought of discovering wonderful things, studying long lost civilizations and becoming an expert of all things ancient. That dream never materialized until I got my hands on This Belongs in a Museum. Now I gallivant among ancient temples to collect artifacts and attempt to lay claim to the most dig sites.

This Belongs in a Museum is the third game in Rather Dashing Games’ Drawn & Quartered series of tile laying games. This game is highly strategic, easy and quick to play and has a great theme.

In This Belongs in a Museum you take the role of an archaeologist. Each of the four archaeologist is represented by one of the four colors in the game. Each player starts with their Base Camp tile as well as three other dig site tiles to form a starting hand.  Each player also randomly takes five of their eight artifact tiles and keeps them secret from the other players. 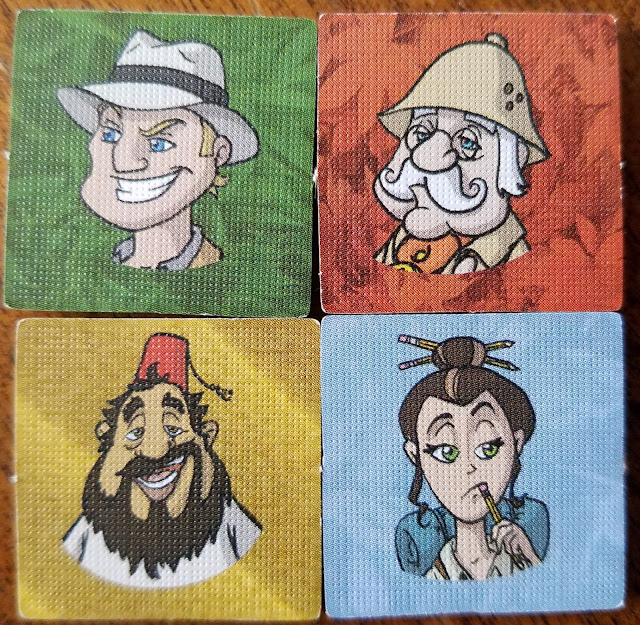 The game starts by placing the tile with the four Mummies in the center of play. On a player’s turn he will take the following actions. Note: some are optional.

1) Play a dig tile to the board. This can be done adjacent to any tile on the board already. There is no limit to where you can place a tile (any tile can go next to any tile), but placing them is part of the strategy. Also, if the player places their base camp then their archaeologist enters the game on that tile.

Any of these options can be replaced with the opportunity to move any mummy to any allowable spot.

3) Move your Archaeologist up to three spaces.
4) Collect an artifact. This can only occur when your archaeologist lands on a dig site with an artifact and you have one in your secret collection.  When this happens, you turn over the artifact tile and show everyone.
5) Replace your dig site tile out of the draw pile to replenish your hand to 4 tiles.

This continues from to player until all of the tiles are played on the board at which time the game is over and scored.

Scoring is based on:
1) How many of your 5 secret artifacts you exposed (3 points each)
2) How many temples of your color are connected to your base camp by water, mountains or airports (1 point each)
3) Artifacts that are your color and connected to your base camp (3 points each).
The mummies add an interesting mechanic in that at the end of the game, they effectively turn the color of any dig sites they are on to the color of the mummy itself. This is a good reason to be careful about making some areas too big (or someones mummy might steal it from you). Mummies also block archaeologist travel through the game.

This Belongs in a Museum is a very solid game. The setup of the game is very simple in that you basically start with nothing out on the playing surface and build the game as you go. Each game after our first one was simply sit down, take the lid off, separate a couple tiles and play. You can’t get started much faster than that.

The first few times we attempted to play, we did so incorrectly. It was obvious to us quickly that something wasn’t right. Although the rules explain it fine, some of the concepts were difficult for us to capture at first. I think watching a how to play video may make the first game as simple as the game play really is.

I loved the concept of Archaeologists collecting artifacts and dig sites. The story line isn’t critical to game play, but I’ve played a lot of good games without a theme and it sure can make the game feel better and it certainly does here. 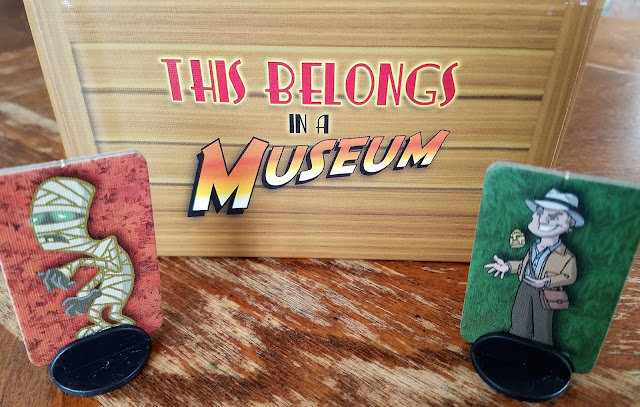 Tile laying is always a fun mechanic. The fact that the tiles can be rotated, switched, swapped and ultimately stolen at the end certainly keeps you on your toes. In most of the games we played, some people collected their artifacts by about three quarters of the way through the game and then used their archaeologists to sit on the artifacts and block them from being collected. It was a little different for us to not need our pieces to continue collecting points of some kind until the end of the game.

The game is listed as 10+ and I think that is a proper age range for the game. The theme is fine for younger ages, but the mechanics do take a little maturity. We found that most of our games played longer than the 20-30 minutes, but not by much as we finished most games in less than 45 minutes.

I found the art work to be fun. I wished the mummies were different characters like the archaeologists were, but they looked fine as is. The components were outstanding quality and the box insert is convenient for keeping all the parts in the right spots.

The Good:
I loved the quick, challenging, and ever changing game that this is. It has strong chances of changing the winner every game and also feeling like you will win until the last minute. The components and packaging are a win, and the game is just fun to play.

The Bad:
The rules and mechanics certainly bogged us down getting started, which is typical for any first game, but we finally got it. And when we did everyone wanted to return to the table again and again. I think if there was a good how to play video it would help a lot. I also kind of wish that the player movement component didn’t stop part way through the game and turn strictly to tile laying, but I think others might find this a fun change instead of a negative like I did.

Final Thoughts:
This is a great game with good components, that is reasonably priced and very replayable. It is quick to start, relatively quick to play (based on the depth), and easy to grasp (once you have the rules down).

Players Who Like:
Tile laying games. Carcassonne isn’t too far off and we know most people like that. This has a better theme and additional mechanics which means you are sure to love it as well. 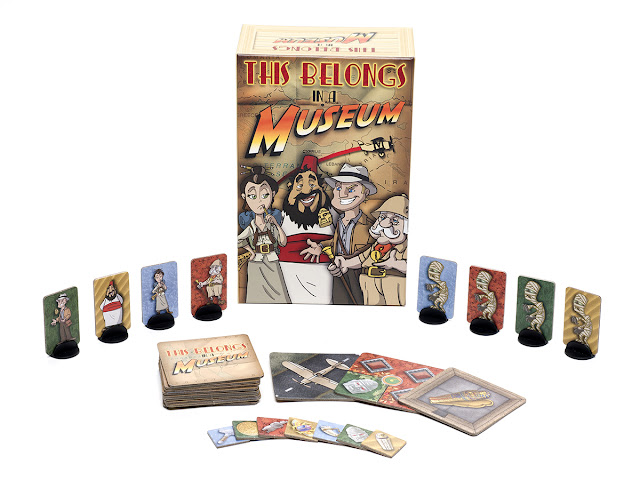 I am giving This Belongs in a Museum 7.5 out of 10 super meeples.

Check out This Belongs in a Museum on: