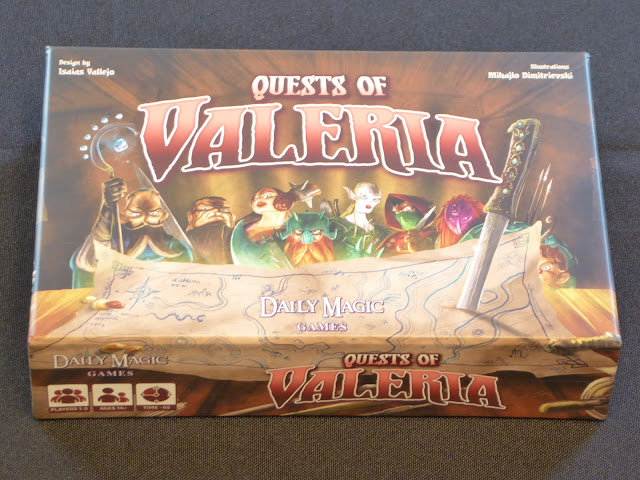 Valeria has always been a land of turmoil, monsters, and those seeking to gain power and influence. Now the Guild Masters of Valeria have joined in trying to position themselves to create the most influential guild in the land.

In Quests of Valeria players take on the role of one of these Guild Masters hiring citizens from the local pub to go on quests in search of fortune and fame. The player to do this the best will become the Master Guild Master! See what I did there?

To set up Quests of Valeria players will shuffle the Guild Master cards and give one to each player. These roles are secret and contain individual bonus scoring possibilities for the end of the game. Players now place the number tokens “0” through “3” in order on the table in the center of play. These numbers represent the cost of each citizen. The “Hire from you hand” token is also placed on the table as a reminder players that they may hire a citizens from their hand on their turn as well. Players then shuffle the Citizen deck and deal three to each player and then deal six face up below the cost tokens already on the table (one under each number) which creates the Tavern. The rest of the citizen cards are placed face down in a draw pile next to the Tavern. Lastly players will shuffle the Quest deck and draw six, placing them face up above the Tavern, to form the quest pool. The first player then receives the first player token and the two action tokens. The game is now ready to begin.

On a player’s turn she may take two of the following actions (in any order and may do one action more than once):

1. Draw: Draw one card from the Citizen deck and add it to her hand.
2. Hire: Hire a citizen from the Tavern or her own hand of cards. Citizens in the Tavern cost the amount of cards shown by the cost token above the Citizen card while citizens in your hand cost two cards to hire no mater what. Costs are paid by cards played from a player’s hand to the discard pile. When you hire a citizen you place them into your guild (on the playing surface in front of you) and immediately take that citizen’s power. Powers include drawing more cards, hiring more citizens, discarding cards, steeling cards, etc….
3. Reserve: A player can reserve a quest by taking one from the quest pool and placing it in front of her. Now only she can work on that quest.
4. Quest: A player may choose to complete a quest by discarding the needed cards from her guild. The cards needed are represented by the type of character(s) required (worker, soldier, shadow, or holy) and that character’s ability/resources (gold, strength, and magic). A player must turn in not only the right type of character(s) but also the right number of each required resource.

After a player has taken her two actions and all of the actions related to hiring citizens and finish quests, she will refill the Tavern with both citizens and quest cards from the draw piles. Play now proceeds to the player on her left. This continues until one player has completed his fifth quest at which time play proceeds back to the first player so that all players have an equal number of turns.

At this point players will add up their quest’s victory points adding any bonuses from their hidden Guild Master card. The player with the most points wins! And as stated above is now the Master Guild Master!

Quests of Valeria has been on my radar for quite some time now. I saw Richard Ham do a run through for it a while ago and knew instantly it would be a game that I enjoyed a lot.

As you saw above the set up is quite simple as there are not many components to deal with. Players can easily get this one up and running in just a few minutes. The rules are fairly straight forward as well, lending to a short learning curve. My one caveat here is the symbols on the cards take a little getting use to. Luckily there are reference cards to help with this.

While the set up and game play may seem easy there are some difficult choices to be made throughout the game. Do you hire a citizen who is cheap or finish a quest before someone snags it? There is also plenty of player interaction as you may be able to figure out what your opponents are going for and beat them to it. The down side to this is it also makes for a high level of take that, which some players don’t like.

Quests of Valeria has a couple mechanics that you may recognize. The first is a set collecting mechanic similar to that found in Lords of Waterdeep. Like in Waterdeep players are working on putting together a team of adventurers that satisfy a quest’s requirements. There are some differences to what you are collecting and how you collect them, but it is the same principle. The second mechanic is that of paying for cards with cards out of your hand. You may have seen this one before in both San Juan and Race for the Galaxy. Now I am not pointing these similarities out to say that it is in any way bad because it certainly is not. I love they way they blended these known mechanics into a cohesive and entertaining game.

The world of Valeria oozes with theme and back story all of which builds wonderfully through the game play of this and the other Valeria titles. That being said you don’t have to be familiar with the other two games to be able to jump into this one.

The thing that stands out most to me in all the games of this series is the artwork! Artist Mihajlo Dimitrievski did an amazing job building the world of Valreia and bring it’s inhabitants to life. The illustrations are incredible and the layouts are spot on. Mihajlo also did the artwork for Valeria: Card Kingdom and Villages of Valeria which are equally as impressive and may use some of the same illustrations. Not sure about that one.

I am very impressed with Quests of Valeria, it is very polished and has been thoroughly playtested and refined. You will not encounter many hiccups as you play this one. It is easy to get going and plays pretty quick, the 45 minute time suggestion is pretty close to what we ran into. I did find that the age range is a little off when it comes to the actual game play as my seven year old was able to pick it up pretty easily.  I imagine the age suggestion was put in place due to some of the artwork not being for younger eyes.

There is not a whole lot bad to say about this other than some of the artwork being a little graphic, but then again I don’t think it was intended for younger audiences. The take that aspect of the game might also not appeal to some gamers like my wife who really dislikes that style of game. Unlike my wife I enjoyed the game immensely and look forward to more game plays!

Players who like Lords of Waterdeep, Race for the Galaxy, or any of the other Valeria game titles will love Quests of Valeria.

I am giving Quests of Valeria 8 out of 10 super meeples.

Check out Quests of Valeria on:

Get your copy at your FLGS or online at www.dailymagicgames.com/quests-of-valeria.