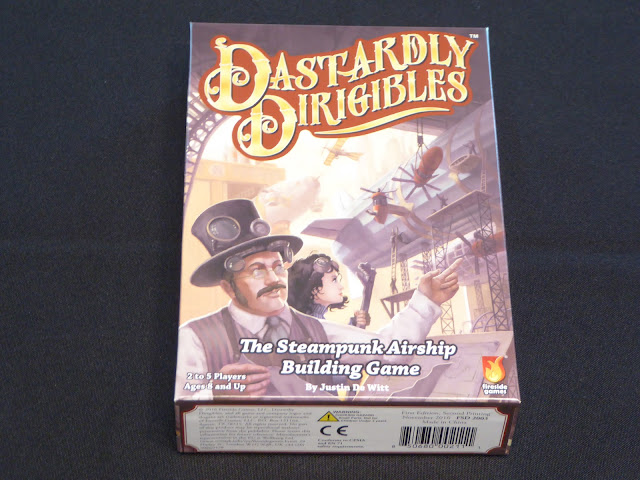 As a new airship designer looking to make it big, the passing of Professor Phineas Edmund Hornswoggle couldn’t have come at a better time. You and your constituents are now in a fierce competition to see who will inherit the Hornswoggle factory!

In Dastardly Dirigibles players will be constructing their airship (composed of seven different parts) from different design styles (suits). Rounds end when a player completes her airship (made of all seven parts) then scores based on the styles (suit) they have the most of. The game ends at the end of three rounds.

To set up Dastardly Dirigibles players will shuffle the deck and deal five cards to each player. Players will then each draw one card from the draw deck to determine who will go first (I.E. the player with the airship part that is closest to the front). The drawn cards then go into the Emporium (face up cards to the side of the draw deck). Finally players take one Guide Sheet and place it in front of them. Set up is complete and players are now ready to begin.

Dastardly Dirigibles is played over three rounds made up of several player turns. On a player’s turn she will do the following:

1. Draw up to five cards in her hand. This can be from the draw deck or the Emporium.
2. Take three of the following actions in any order and any single action can be done multiple times.
a. Play and Airship card or a Special card. When a player plays and airship card from her hand she must place it on her Guide Sheet in the appropriate position. For example the nose cone would go in the nose cone position. Once the part has been placed all other players that have the same part in their hand must also play it onto their own Guide Sheets. Lastly when a player plays a Special card they must follow the rules on the card.
b. Discard a card. A player may discard a card from her hand but does not replace it at this time.
c. Swap a card from her hand with one in the Emporium.
d. Replace the Emporium. The player may discard all the cards in the Emporium and draw new ones from the draw pile.
e. Pass. A player may choose to pass on her turn.

Once a player has taken her three actions play passes to the player on the left. This continues until one player has completed her airship (with all seven parts) at which time the round ends and all airships are scored. To score an airship players look to see which suit they have the most of on their ship and score 2 points per matching part. For example Player A has three “chain” parts in her airship and thus scores 6 points. All ships are scored even if incomplete and all “Wild” parts are worth 1 point.

Players may even attempt to “shoot the moon” by creating a “Muddle”. A Muddle is completed airship that contains no two parts of the same suit and no wilds. A Muddle Air Ship scores 20 points!!!

Incomplete ships with no two parts of the same suit and no wilds earns one point per section.

After the third round scores are tallied up the player with the most points wins!!!

I was really excited to hook up with Fireside Games to review and giveaway some of their titles. I am a big fan of Castle Panic and am really looking forward to Hotshots which is coming out soon. When I heard they were sending Dastardly Dirigibles for a review I wasn’t sure what I was in for. I hadn’t heard much about it and was a little worried. To my surprise it is an awesome little game that mixes set collecting with some trick taking aspects.

In Dastardly Dirigibles players are working to create airships that are composed of as many cards of the same suit as possible in order to maximize their points (set collecting). Another option players have is to create what is called a Muddle, where their ship is composed of cards with no matching suits and no wild cards (trick taking). Players will draw, discard, manipulate the face up draw cards, and mess with their opponents ships in order to complete this goal.

The game play is pretty slick and moves quickly. The mechanic of players having to add a part to their ship when it is not their turn creates very interesting dynamics. For example if Player A plays a nose cone and Players B and D both have nose cones in their hands they must also play them to their ships (even if they already have a nose cone in play). This can really ruin someone’s plans quickly. Also the ability to “shoot the moon” by going for a Muddle ship creates a lot of excitement not to mention heart failure. Players may also play special cards which have a variety of abilities including trading, stealing, and destroying opponent’s ship parts!!!

I really dig the steampunk theme of Dastardly Dirigibles, it is one that I am drawn to a lot (Steampunk Rally being one of my favorites). I suppose the theme could have been anything with the mechanics being used however the back story and the way the ships look after they are built, I couldn’t see it being anything else.

The artwork is wonderful and really does a great job setting the steampunk vibe. The ship parts are very imaginative and look really cool when all mixed together creating Frankenstein looking ships. The components are basic, cards and a playing mats. While the cards are excellent quality (and shuffle very well) the playing mats are a bit nonfunctional.  What I means is, due to the folding process when you lay your mat out it is impossible to get flat which in turn makes it hard for the cards to stay where they are suppose to be. We just ended up putting one mat in the middle and everyone played without one.

All-in-all this game is really solid, with fast interactive play and a variety of strategies to try. It is easy to learn and easy to teach which is always a plus. It also sets up very quickly which means your group won’t have time to check Facebook before the game begins. Players young and old will be able to pick this one up and play.

This is another great small box game that will be easy to pack and take with me and doesn’t take up much shelf space. It also is light on the wallet coming in under $20 which you can get online or at your FLGS.

I am giving Dastardly Dirigibles 7.5 out of 10 super meeples.

Check out Dastardly Dirigibles on:

You can win a copy of Dastardly Dirigibles here on Everything Board Games by following this LINK. The contest runs March 30 – April 13. Good luck!