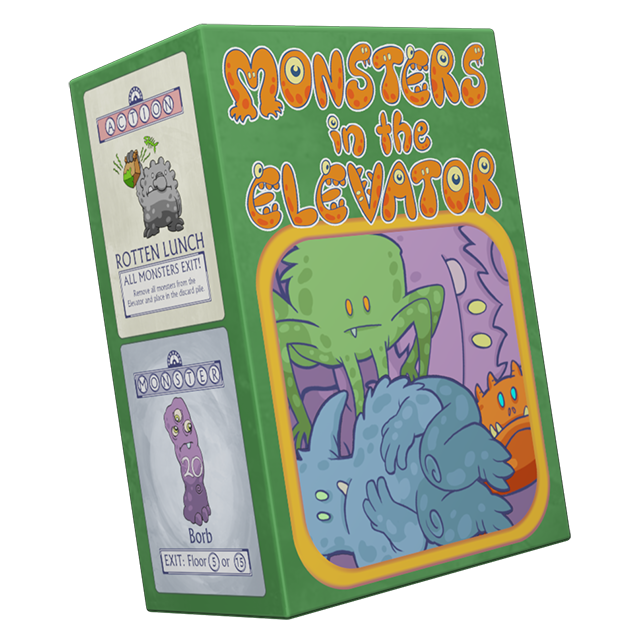 In late September 2016 Hasbro Game Labs launched their “Next Great Family Game Contest” which would see contestants from all over the world submitting their game designs in the hopes of winning $25,000 and the chance to work with Hasbro to make their game a reality. Of the many entries received only five finalist were selected by Hasbro and given $2,000 to help develop their games more. Each game designer then created a crowd funding campaign on Indiegogo in efforts to convince Hasbro and special guest judge, Daymond John, that their game is the Next Great Family Game.

Monsters in the Elevator, a fun family card game from designer Jason Wiser, is one of those lucky five finalist. In this game players are working together to help monsters get on and off an elevator that is going from the ground floor to the top floor of their monster office building. If too many monsters get on the elevator and their combined weight is too much, the elevator breaks and the players lose. If the players can manage the monsters well enough and make it all the way to the 20th floor they win!

To set up Monsters in the Elevator players separate the two decks; the Floor deck and Monster deck. The Floor deck is ordered from floor one to floor twenty and placed in the center of play. The Monster deck is shuffled, each player is then dealt three cards, and the remainder is set in the middle of play to create the draw pile.

The game is broken into twenty rounds (one round per floor) where players will do the following:

The game ends when players have exceeded the max weight of the elevator or if they reach the 20th floor safely.

There are a couple of variations which can make the game more difficult (reducing the max weight) or more unpredictable (mixing up the floor cards).

Monsters in the Elevator totally came out of left field for me, as one of my reviewers contacted me asking if I had time to do a quick turn around on a review. At first I was not too excited about the prospect as my plate was already pretty full. In fact I took a look at the link he provided and promptly suggested we find a different reviewer. He insisted I was a good fit for the game due to my having younger children and it being an educational game. So I reluctantly agreed to do the review and within a couple days Monsters in the Elevator was sitting in my mailbox.

As always my boys were really excited to see what new game dad was getting and begged me to open it right away. Upon opening it and seeing the name and fun cover artwork they all insisted that we play it immediately. As it turns out we ended up playing four times in a row, enjoying each time as much as the first.

While Monsters in the Elevator is billed as an educational game it does it in a very covert way while still being very entertaining. Players will use math skills to add and subtract the weight of the monsters as they get on and off the elevator. They will also use division and multiplication along with math terms like “odd” and “even” to determine when monsters exit the elevator. Besides developing math skills what makes Monsters in the Elevator so great is the blind cooperative play. Each player adds monsters (or special cards) to the elevator secretly then they all reveal at the same time. Sometimes things work out while other times catastrophe strikes.

The premise for Monsters in the Elevator is hilarious and the artwork and game play really feed into it nicely. The illustrations are simple but really fun and very colorful. I am not sure this will be the final artwork if Hasbro ends up publishing it, but I hope they keep it. Jason did a wonderful job creating a variety of monsters with different names and attributes which add to the charm of this game. I think Batfrog ended up being the family favorite monster.

I love that board games are a great way for children to learn many different skills—even games that don’t bill themselves as educational—while still being entertaining. Take for example a simple game of War where kids learn greater than and less than. Well Monsters in the Elevator is another great gaming resource that teaches basic math skills while being fun and challenging.

While this game doesn’t target adult audiences specifically, more mature (another way of saying old) gamers will enjoy playing this one with their kids. It could even make for a fun fast filler game. The triple F!

This game will appeal to parents and teachers looking for educational resources that are also enjoyable. If you like what you see you can support Monsters in the Elevator on Indiegogo between now and February 12, 2017.

I am giving Monsters in the Elevator 8 out of 10 super learning meeples.

Check out Monsters in the Elevator on:

The Indiegogo campaign runs through February 12, 2017.