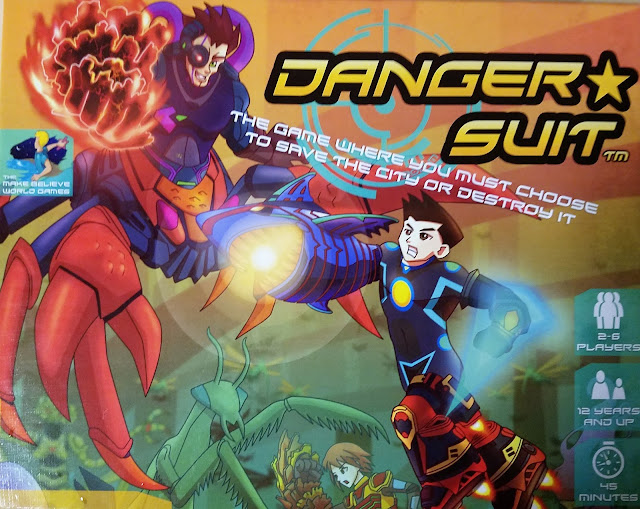 It is always the rogue scientist that starts these messes, isn’t it? Well today his name is Frank ( I would have never guessed Frank would do such a thing but he has) and he has stolen some of our technology and mixed it with a little of his own devious work. Frank is trying to destroy the city and the only way to stop him is are the other scientist from the lab.

In Danger Suit you take on the role of one of these scientists or Frank, the Villain who has stolen the dangerous lab technology.  The scientists (I will call them the Heroes or Hero Team) each have special skills and access to the technologies the lab has created for doing good. Once you have selected who you will play as in the game, you will take the associated character board and place it in front of you. There is a place on each player board for a modified head, torso, left and right arm, and legs.

Once the players are selected the city must be created. This is done with the starting tile placed in the center of the table and the rest of the city tiles shuffled and stacked. The Villain takes the top tile and gets to place it first. Roads on the tile must connect to the roads on the start tile. The Hero Team then takes the next tile and places it (following the roads rule), and then the Villain places another, back and forth until all of the tiles are placed.  Each of the Heroes place their meeple anywhere in the city to start.  Then the Villain can place his Fortress anywhere adjacent to any city tile and places his meeple there to begin.

During the game, the heroes and villain move around the board with different actions having different effects. Throughout the game the Heroes collect the five body parts and can replace their current parts if they feel the new part is better. When the Villain gets body parts (mutates) the new parts must replace the old ones. The Hero team can also have a single Civil Defense Force (Army or Marines, etc.) as part of their team and the Villain can have Minions on his team.
One of the things that can happen during the game is a combat between the Villain and one of the Heroes this occurs when they end up on the same city tile and one of the players uses his turn to attack. The Hero and the Villain each choose what they are going to attack with, either one of their 5 body suit parts or their Civilian Defense Force or Minions, and reveal it at the same time.
The Hero’s attack piece shows two dice colors: two blue, two green, two red or any combination of those. The Villains defense card has any color dice it is immune to and a number required to beat the suit piece. The colored dice represents a different numbered die: blue is a d8; green is a d12; and red is a d20. Some of the heroes also have dice bonuses, for example on the Kate card shown above she gets +3 to any blue die. The hero rolls the dice shown on their attack card, minus any immunities shown on the Villains card and if they get a higher total die value shown on the Villain card then they win the Combat, otherwise the Villain wins. The loser gives any energy cubes to the winner.
Other actions that can occur on a players turn.
-Villains can destroy city tiles. When this happens the tiles are flipped over and the Villain gains a special bonus as listed on the back of the tile.
-The Heroes can enter the Lab and get new suit pieces.

-The Heroes can enter Power Stations to get more energy cubes.

The game ends when the Heroes collect all of the energy cubes (5 Each) at which time they win. Or the Villain collects 5 energy cubes and returns to the Fortress to activate the Death Ray at which time she wins. Lastly the villain can win by destroying all of two types of city tiles (Residential and Commercial for example).

Rules and Setup:
The rules, as you can see are pretty complex. The game plays much simpler once you get all of the options down, so this would be a fantastic game for a “How to Play” video.  Let’s just say it is easier to play than to explain.

The setup is cool because it is actually part of the game. Building the City takes a little time, but it is strategic and modular making the game different each time.

Theme and Mechanics:
The theme is a pretty standard super hero style game (something I particularly enjoy). The mix of mechanics is pretty unique; tile laying to build the city, dice rolling combat based on individual parts and player construction, but it works well.

Game Play:
The game plays pretty well. A couple of our first games ended far sooner than 45 minutes as our strategies were flawed, but once we got it figured out the game played to the stated time frame.

The game is listed as 12+, which is probably a good recommendation for the Villain because they play on their own. The Heroes are coop, so my 7 year old joined in with the other heroes helping her. That also helps when introducing a new player. We didn’t spend anytime explaining the game just brought them right in and they were ready to be the Villain in the next game.

Artwork and Components:
There is a little of everything in this game – tiles, cards, boards and dice. All of the components are of standard to good quality.

I’m absolutely a sucker for the art work in this game. The art represents the theme perfectly and I don’t think they could have done a better character representation for the game.

The Good:
I love the unique mechanics, the coop game play with a twist (someone taking on the role of the villain), the artwork and the perfect team balance that the designers have produced. This is a game to have if you are a fan of super heroes and cooperative board games (and who isn’t).

The Bad:
The only thing that I can even think to criticize are the characters names. Frank? Carl? I have begun to wonder if this is somewhat intentional.  This clearly doesn’t affect any game play.

Final Thoughts:
I want to get an Everything Board Games Super Meeple and a character named Dave added to this game. That would instantly take this game to a 10.5. Then the only “Bad” would be that Frank would never win. Muahahaha.

I am giving Danger Suit 9 out of 10 super meeples.

Check out Danger Suit on:

Get you copy on The Game Crafter.

Dave Merrell is a Professional Structural Engineer who specializes in Zip Lines and Challenge Courses. When he’s not swinging in the trees (or sharpening his pencil) he’s playing games, most often with some or all of his 5 kids. Dave lives in beautiful Flagstaff, Arizona.
My name is Dane Trimble I am the Advertising Manager for a national magazine by day and a husband, father of four, and board gamer by night (and mornings). I have a passion for board games as I believe board games help bring families closer together while providing kids a unique way to learn many diverse skills. And they are down right fun!!!