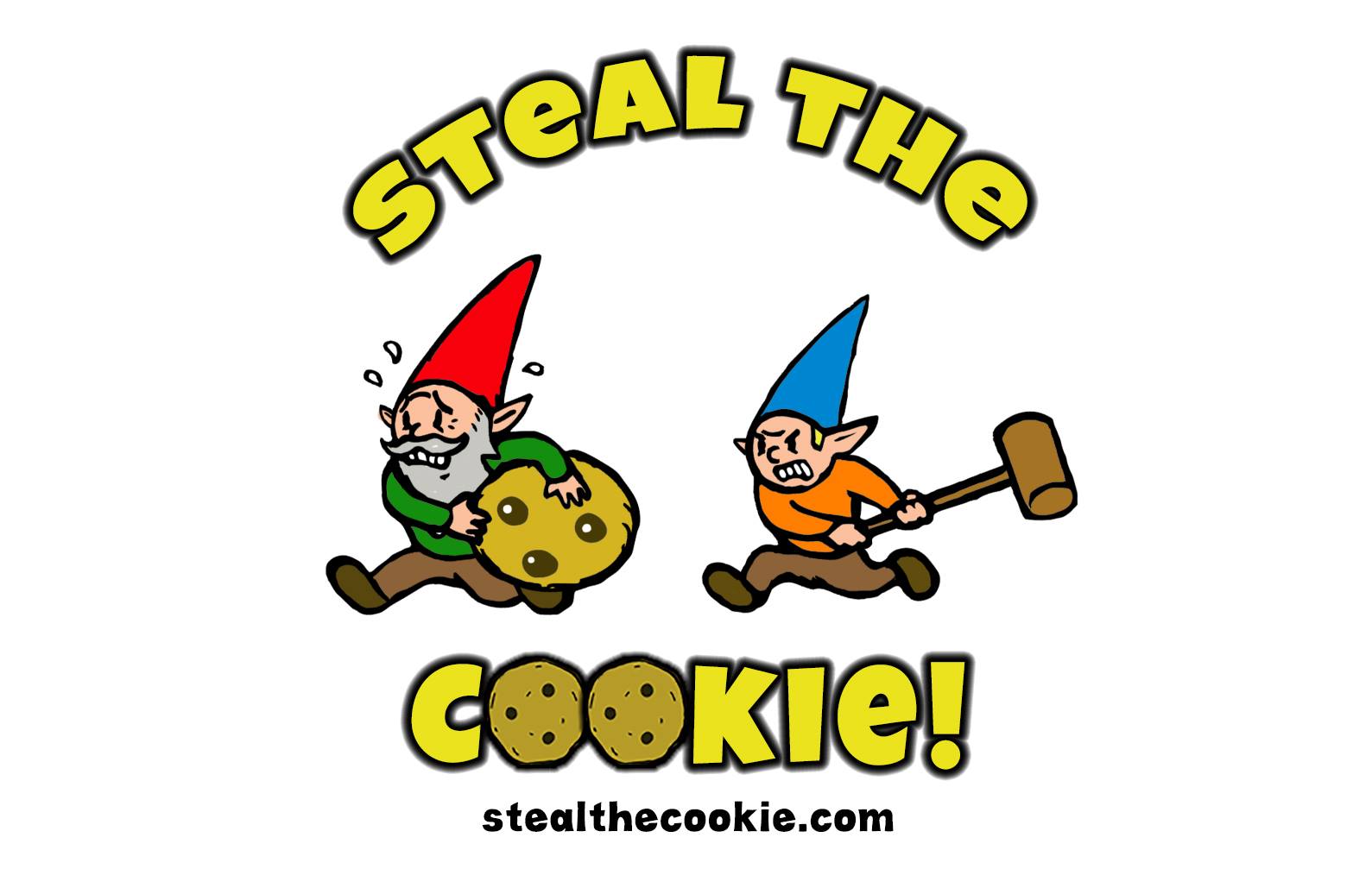 WARNING: This is a preview of Steal the Cookie. All components and rules are prototype and subject to change.

Imagine for a minute a bunch of magical gnomes running around the woods avoiding the dangerous wildlife and other gnomes while trying to obtain the most majestic prize known to all gnome-hood—a human sized cookie! I don’t know how your imagination works but Bradley Gaurano, the game’s designer, believes that gnomes are not very nice to each other while trying to obtain this amazing prize.

In Steal the Cookie, each player starts with five cards in their hand with one player holding the Almighty Cookie (add some bravado while saying that). On a player’s turn he draws a card from the draw pile then either plays one or passes. There are three types of cards including: Action Cards; Interrupt Cards; and Stop Cards.

Action Cards can be used on your turn to try gain an advantage over the other gnomes in trying to obtain the Cookie. If you draw an Action Card you take it into your hand then play any Action Card from your hand. Note you can only play one Action Card per turn and players may also choose to pass instead of play.

If you draw a Stop Card you immediately show it to the other players and resolve the text. These cards tend to shake up the game and sometimes causes the Cookie to be passed to another player. After drawing the Stop Card and all Interrupt Cards have been played your turn is over and you do not get to play an Action Card on this turn. Some Stop Cards also require that the Cookie to goes up for grabs with players rolling a d20 to see who gets it.

There is also a special kind of Stop Card that is called the Sacred Cookie Jar. When a player draws one of these cards, they immediately play it to the table. When all four of these cards are played and the cookie jar is complete and the game immediately ends. Whoever has the Almighty Cookie at this point is considered the winner!

Rules and Setup:
The rules were well written and made the game simple and fast to learn.

Setup is a little more complicated than a normal card game. You have to sort shuffle, deal, reinsert certain cards and reshuffle. Not horrible, but more work than you would think.

The mechanics are clean and simple. Sometimes you give away all of your cards to defend yourself, only to be attacked again, but that is a strategic choice not the game mechanics.

Game Play:
Steal the Cookie plays quickly so we were able to get in several sessions. There were a few times where some cards seemed far too powerful.

Age recommendation is 7+, according to the publisher, which is great so long as someone older (10+) is available to sort everything out during setup. But, my kids definitely loved this game.

Artwork and Components:
The cards were of decent quality. The die was a standard d20.

The art is fun and the text on the cards is humorous.

The Bad:
I thought the unbalanced nature of the game was just too much for me. You would be in good shape one minute and lose the game the next.

Final Thoughts:
My kids loved this game and could play it for weeks. Was not my favorite card game, but having a game that excited the kids is great!

Players Who Like:
Card games with interaction. It is a little bit of a reverse on the old fashioned Old Maid game, but it feels a little like Uno and other quick playing card games as well.