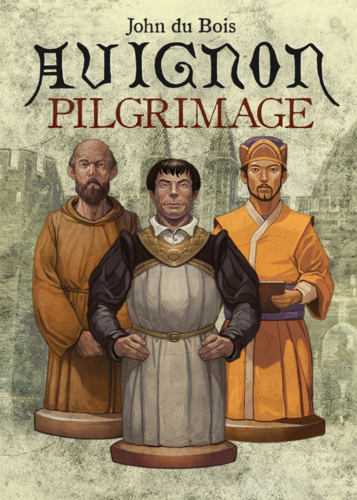 WARNING: This is a preview of Avignon: Pilgrimage. All components and rules are prototype and subject to change.

In Avignon: A Clash of Popes players are vying for the position of Pope and as such are trying to influence members of the church to their congregation. Players do this by pushing and pulling character cards back and forth across the table using actions and character powers. The player who can do this the best wins.

The Pilgrimage expansion adds six new characters with new ways to push and pull your way to victory. In addition there are alternative rules for set up that adds more depth and strategy to the game.

To set up (regular play) players place the five map cards between them going from Avignon to Rome. Players then shuffle the twelve character cards and place five face up along the Genoa map card row. The remaining character cards are placed in a face down draw pile. See picture below.

Once the game is set up the player on the Rome side will go first. On a players turn they must take two of the following actions:

Once a player has taken her two actions her opponent takes his actions. This goes back and forth until one player has three cards in their congregation. A card is considered in a player’s congregation once an action moves it past Avignon or Rome. The player to do this wins!
Note: a player may never do actions that would totally undo what the previous player has done on her turn.
There are also combinations using the Noble character that can trigger winning conditions. And as I mentioned above there are different ways to set up that combine characters from A Clash of Popes and Pilgrimage giving the game more variety and strategy.
A quick pictorial play through.

As you can see from the above set up and game play descriptions Avignon is extremely easy to set up, learn, and play, however it is not that easy to master. It reminds me a lot of Chess wherein it is easy to learn what the pieces do and how to win but much harder to learn the strategy behind it all. Also there is no randomness, again very much like Chess, everything is open to both players so it becomes very strategic.

That being said the game is pretty accessible to players of all ages, although younger players may not be able to compete with older players who can create a better strategic plan. Also Avignon plays very quickly so many games can be played in one session.We were averaging 10 minutes on most games played.

I was sent a final version of A Clash of Popes and a preview copy of Pilgrimage and I can say I can’t tell the difference. The components are solid and the artwork is great. Fabrice Wiess did a fantastic job creating the characters and giving Avignon a very classic feel. 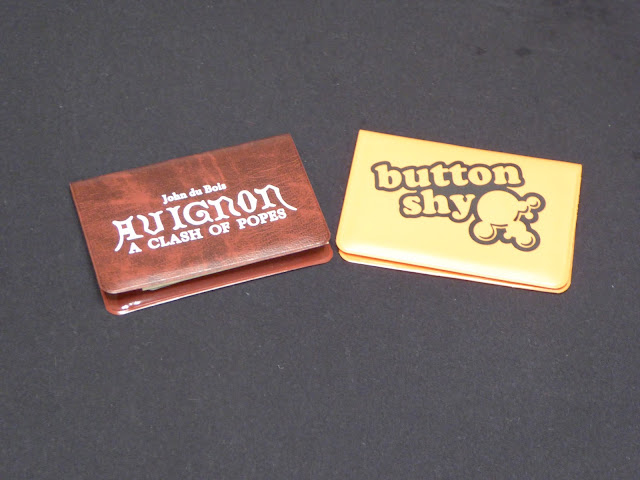 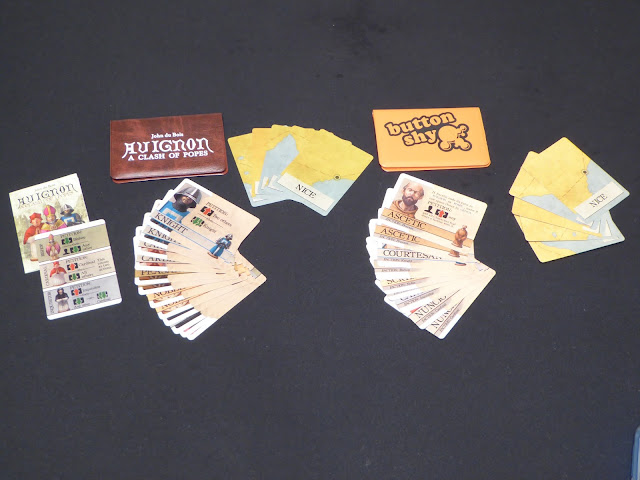 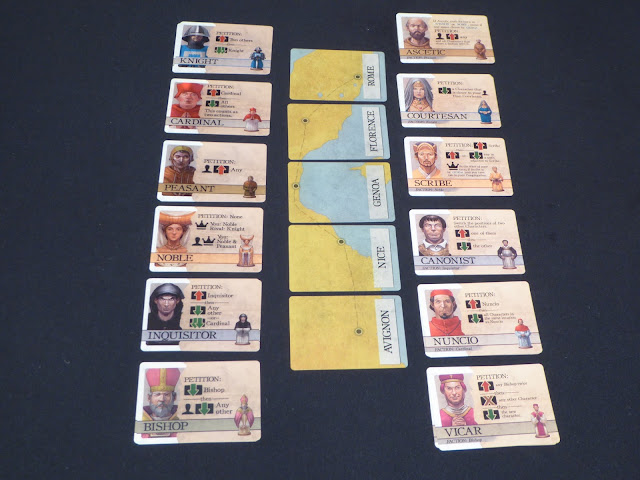 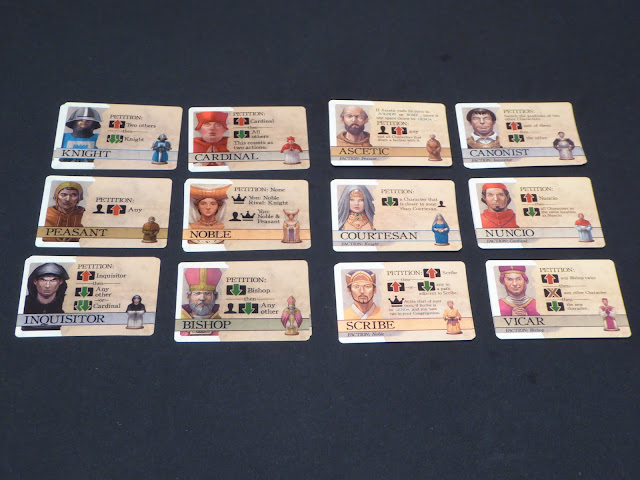 Now for the actual review on Pilgrimage. In the original game most of the Petition powers simply push and pull characters where as in Pilgrimage characters can be switched or moved depending on where they along the path or even discarded from play.

I really like the addition of the new cards as it opens up new options and strategies. I also liked mixing the base game characters with those of Pilgrimage. John du Bois was able to pull this off by adding factions to each of the new character types that match those of the base game. So for example when a character card effects the Bishop (base game) it would also effect the Vicar (expansion).

Avignon is another great example of what can be done with limited components. I am excited to see how far Button Shy Games can take the Wallet Game series.

Players looking for easy to learn, quick to play games that offer a decent amount of strategy will really enjoy Avignon: A Clash of Popes and the Pilgrimage expansion. And for $12 it is hard to pass up. Make sure and check out Button Shy’s Kickstarter for Avignon: Pilgrimage, Turbo Drift, and Find Your Seats launching January 3, 2017.

I am giving Avignon: Pilgrimage 7 out of 10 super meeples.

Check out Avignon: Pilgrimage on: