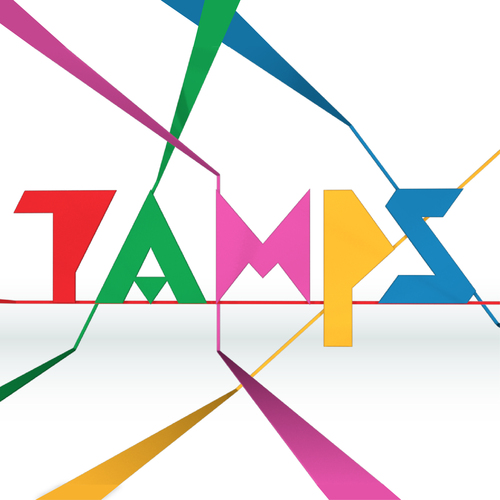 WARNING: This is a preview of Tamps. All components and rules are prototype and subject to change.

Tamps is a fast paced matching game similar to all the games you have played and yet a little different at the same time.

Tamps is played in teams of two, three or four players on a team and two or three teams. Each team takes time to themselves to determine what their secret, non-verbal signal to each other is. A deck of 80 cards (16 different symbols each on 5 different color cards) is mixed up and 5 cards are dealt to each player. Once players have reviewed their cards, cards (one more than the number of players) are flipped over on the table. Players, in rapid fire mode, exchange a card in their hand for one on the table. Once no players are interested in the cards on the table anymore, the cards are removed from the table and a new set of cards are laid out to be picked through again.

Players are trying to achieve a “Tamps”, which is a set of 5 identical shapes of 5 different colors. Once this happens any other player at the table may call out the “Tamps”, except the player who has it. If I believe at any time that John has a Tamps, then I yell “John Tamps,” at which point he reveals whether he actually has a tamps or not.

This is where the secret sign comes in. If I achieve a Tamps then I try and get my teammates attention to signal them that I have a Tamps before my opponents notice. This leads to many decoy signals being thrown out throughout the game. On top of the decoy signals, the cards are also geometrically similar, so a player who thinks they have a Tamps, sometimes actually has a card that matches closely, but is not the same.

Any team who accurately calls Tamps (whether on a teammate or from an opposing team) receives a point. Games can be played based on time, number of rounds, or number of points. Once the predetermined end game is complete, the team with the most points wins.

Rules and Setup:
The rules are straight forward and easily understood by all.

Setup consisted of mixing the cards and passing out 5 to each player. Not tricky at all.

Theme and Mechanics:
The theme seemed to consist of simple geometric shapes with various parts of the triangle filled in. This made it fun to find that the shapes played with your mind a little.

The hardest part mechanically, for our four player game was to be ready to switch out the 5 cards. Once everyone was done with the cards on the table, they had to be collected and 5 more revealed while everyone was eager to grab the cards they needed. Otherwise mechanics were simple.

Game Play:
Rounds were quick, maybe 5 minutes each. We found we were wrong more than we were right, either the opponent we called out didn’t actually have Tamps, or our partner thought they had Tamps, but one card had an extra tip filled in. We also found that the other team was quick to catch on to the cards you were collecting and call Tamps before your partner looked up to see the sign.

The designer listed the ages as 10+ which seems a little old for the mechanics of the game. I would say that it is simple enough for a 6 year old to play, but the speed may be better suited for an 8+ rating.

Artwork and Components:
The geometry is certainly a fun thing especially when it messes you up. We played with a prototype game which consisted of printed paper in sleeves with regular playing cards to stiffen them up. The designer sent us 5 actual Tamps cards which were of good quality and would have been much more enjoyable to play with.

The Good:
It was easy and quick to learn and the strategy was not that difficult to pick up. Seems like the final components should be really nice too.

Final Thoughts:
My family certainly liked the game. They kept wanting to play another round because their competitive nature often left them feeling beat by the cards. As avid baseball players, my sons also liked using their steal and bunt signs out of season.

Players Who Like:
If you like a time filler that is not complex, then this might be the game for you. It is similar to Spoons or Phase Ten or even Go Fish in ways.

Check out Tamps on: