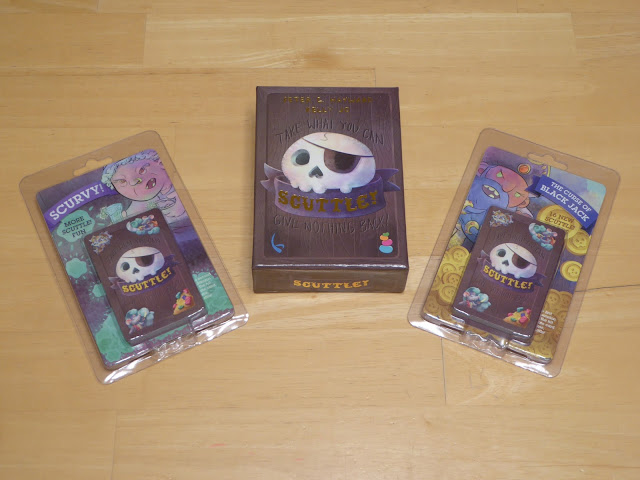 Ahoy gamers! It is time for more hi jinks on the seven seas, and this time we will be taken a look at Scuttle! A game of treasure hording and pirate shenanigans for 1-5 players.

The object of Scuttle! is simple, be the first player to reach 21 doubloons.

To set up Scuttle! players remove and set aside any blank cards, the Robot Pirate card and the Davy Jones card. These are used in different variations.

Players then shuffle the deck and deal each player four cards. The remaining cards are shuffled and placed face down in the center of play. The player who last visited the sea goes first.

On a player’s turn she can choose to take ONE of the following two actions. She can draw the top card of the face down deck and add it to her hand OR she can play one card from her hand. Cards may be played as a treasure in front of the player OR as an ability.

Cards played as treasures are worth the amount of doubloons indicated on the upper left corner of the card. Cards played for abilities have text on the bottom that a player must follow. These can include permanent abilities (on going throughout the game) which are placed sideways above a player’s treasure cards or actions against other players.

Once a player has taken her turn play proceeds to the player on the left who preforms his one action. This continues until one player reaches 21 doubloons and is crowned King Pirate or Supreme Scurvy Dog or something like that.

There are a couple variations for four and five player games which have players work as teams or in the case of the five player variant one player takes on two teams using the Davy Jones card.

There are also a couple of play variants including; the War of Pirates Variant which is a way to chain multiple games together, the Accountant Sea which forces players to hit exactly 21 doubloons, and the solo variant where the player takes on the dreaded Robot Pirate.

The package I received to review also came with two expansions;  Scurvy which adds disease cards to the game and The Curse of Black Jack which adds more of everything along with a new turn action-Summon.

Scuttle is a breeze to learn, easy to teach, and only takes moments to set up allowing players to get it to the table quickly. The rules are very well laid out taking you step by step through the game play and the variants. The game is simple to pick up by both older and younger players, the box says ages six and up which I would agree with.

Although Scuttle is not hard to learn and is not complex to play it does offer fun game play as both you and your opponents try and gain treasures while trying to stop each other. The back and forth nature of the game combined with the exciting theme and whimsical card artwork makes Scuttle a fun family game.

Scuttle is all about player interaction so there is never any down time between turns. And the game plays so quick (5-10 minutes) that if you aren’t paying attention it is over before you know it. At first I was nervous about the take that nature of the game but it turns out that many of the bad things you end up doing can effect you too. And as I have said in previous reviews as long as you know it is that style of game it can be quite enjoyable.

The artwork for Scuttle is awesome. I am not sure I have seen a style quite like it before and I love it. It is very unique and fits the light-hearted nature of the game very well. Kellie Jo does a fantastic job of capturing the pirate feel while at the same time making the game very family friendly. Which as a father of four I really appreciate. 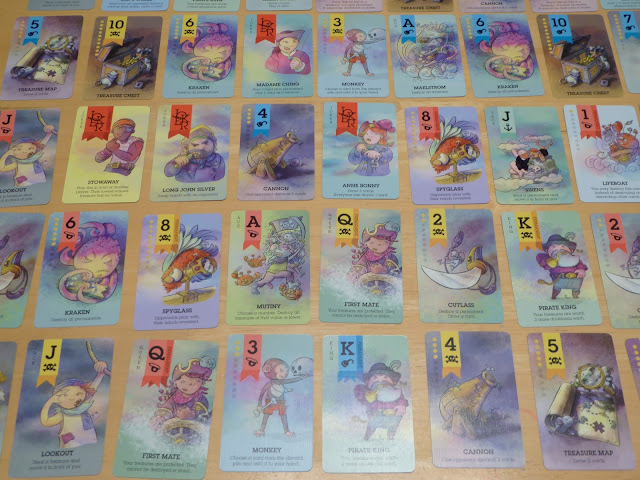 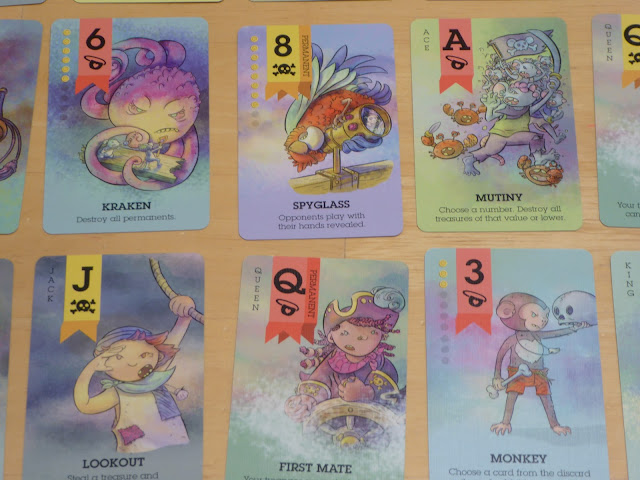 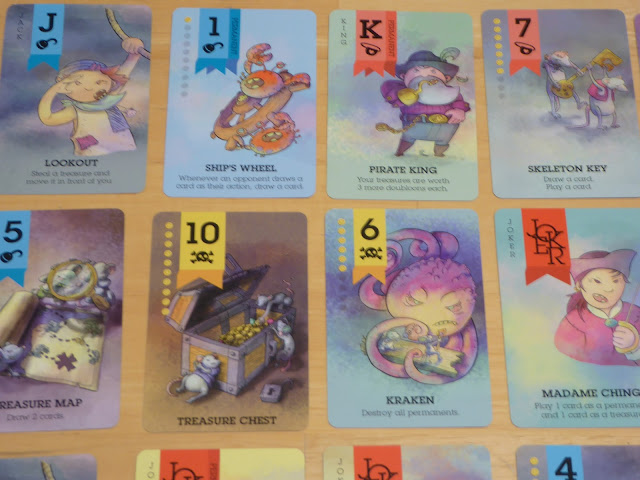 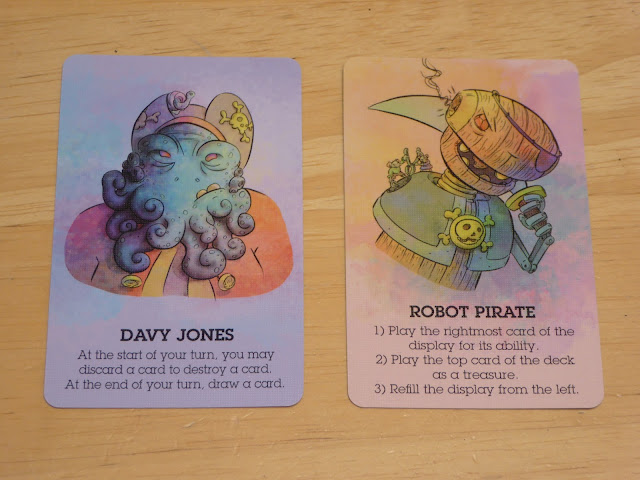 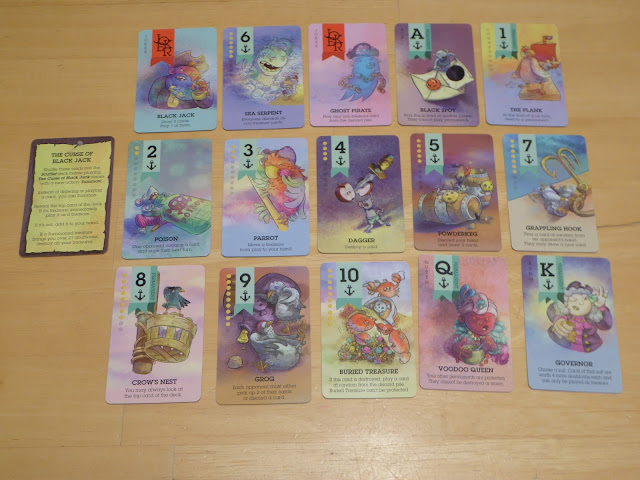 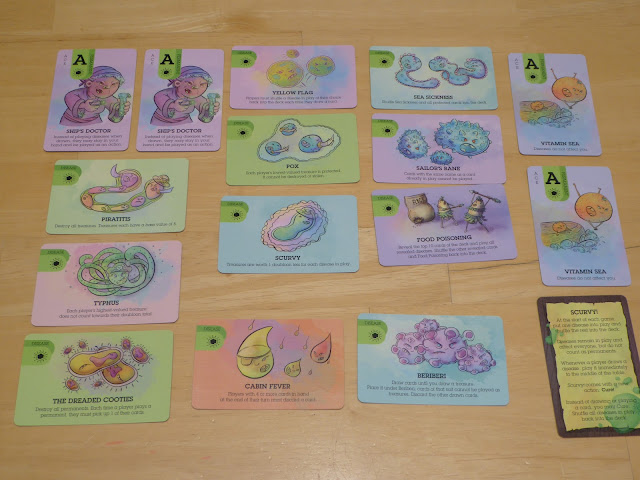 The components are great; solid box and great card quality. Both expansions came in nice plastic hanging containers (I am sure those have a name, but I can’t find it), however they also fit nicely in the main box as well. 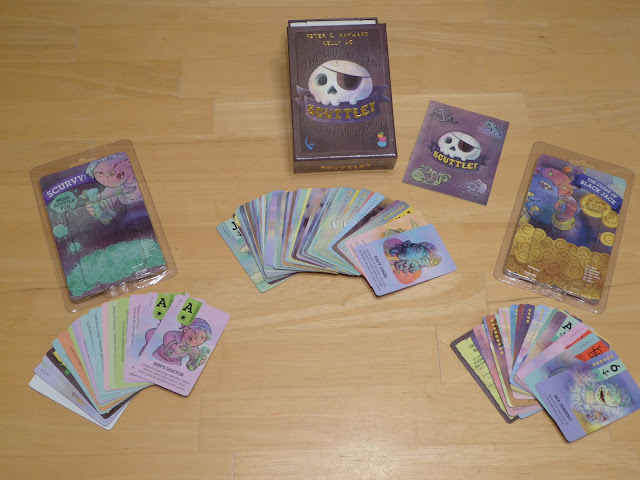 Yes Scuttle is yet another pirate game, but hey as long as it is good who cares right? It is a small box card game that plays in under 15 minutes and makes for a great light filler game (easy to pack and easy to play). I love the fact that my kids can easily pick it up and play without needing me to help. This is one that will definitely be added to the collection.

Scuttle might not be for everyone as it is on the light side, but there will be a lot of players out there who will enjoy it. Players who like Killer Bunnies, Gnomi, and other fast paced take that style card games will love Scuttle!

Check out Scuttle! on: