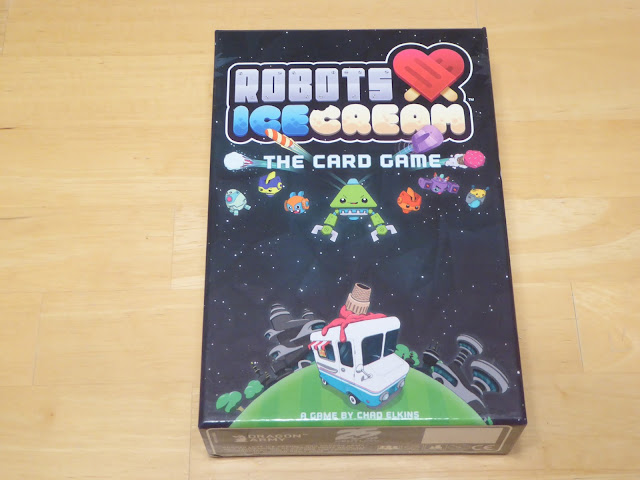 WARNING: This is a preview of Robots Love Ice Cream. All components and rules are prototype and subject to change.

Nothing beats a chocolate fudge ice cream cone on a hot summer day…to blow evil-ice-cream-stealing robots out of the sky!!!

In Robots Love Ice Cream players are trying to keep alien robots from stealing ice cream from five different planets. Ironically players use weaponized ice cream to do this. Hmmm… Well if players are successful they will save the day, save the ice cream, and win the game. Fail to prevent the loss of ice cream and suffer my wrath! Seriously I can’t live without ice cream. In addition to all the players winning (or loosing) together, one player will be crowned the ICECREAMANATOR (I totally made that up). Actually the player who has collected the most Ice Cream Victory tokens and Sprinkletonium (not made up) with be the Champion of the Galaxy (also not made up).

To set up Robots Love Ice Cream each player will start by selecting an ice cream truck and placing it in front of them. Players then select the set of planet boards that match the number of players. These boards a ordered one through five (one on the top and five on the bottom) and placed in the center of play. Next players will take the Spinston Beam Track cards and place them down next to the planet boards in order one through three (one being at the top and three at the bottom). The Robot cards, Boost Cards, and Weaponized Ice Cream cards are then shuffled and placed near the planet boards along with the Sprinkletonium cards. Each player is then dealt seven Weaponized Ice Cream cards and the player who last ate ice cream is given the first player card.

Once the planet is prepared each player will take a turn which consists of the following actions:

After each player has taken a turn the Spinstons and robots now attack. Each robot has text at the bottom of the card that explains how it attacks. Players resolve this text one card at a time starting with the lower left card and going through all the cards. After all robot’s text has been resolved the text on the Spinstons cards are resolved (which basically moves the  Ice Cream Victory tokens up the Spinston Beam Track). After the third robot phase all Ice Cream Victory Tokens that have moved off the beam track are lost to the Spinstons and all remaining robots escape the planet and are placed in the discard pile.
The final phase of the round is buying upgrades for your truck and installing them. Players draw the top three boost cards and place them face up. The first player may then chooses an upgrade to purchase paying the indicated cost in Sprinkletonium (from their stash). Another card is then drawn from the boost deck and placed face up and the next player may also choose to buy an upgrade. This continues until each player has bought an upgrade or had a chance to. Players then add the upgrades to their truck (if there is room).
Play continues by flipping over the next planet board and setting it up as explained above and going through the rest of the outlined phases. The game ends when players finish the fifth planet. If the players have ten or more Ice Cream Victory Tokens (together) they win, if not the Spinstons win. Boooooo!!!
Also the player with the highest score takes the individual honor of Champion of the Galaxy. Scores are determined by giving players one point for each Sprinkletonium card and two points for each  Ice Cream Victory token.
There are several variants in the rule book including solo play rules, rules for varying the difficulty of play, and a couple fun rule changes to spice things up a bit.

Robots Love Ice Cream—a card/board game adaptation of the popular mobile app—is a fun, light, cooperative game for the entire family that is easy to play and easy to learn. Yes despite the lengthy description of both the setup and game play above, it really is easy to pick up and play. The main mechanic of turning in sets of ice cream cards in order to remove a robot card is simple enough that my seven year-old had no issues with it. Although remembering the order of play definitely required my assistance.

The game plays pretty quick once you get the hang of it. I think our sessions generally played in under the advertised 30 minutes. One of the variants allows players to eliminate more than one robot on their turn which simplifies and speeds up the game tremendously, however I was not a fan of this variant as it was too easy.

There is plenty of player interaction in this cooperative game both with strategies and with the different upgrade card interactions. There is also a surprising amount of strategy determining the best way to get rid of the robots in order to avoid their attacks. Upgrading allows for fun combos and special powers which makes each buying phase important since each planet gets harder and harder.

Robots Love Ice Cream has a great feel to it due to it’s theme and fun artwork. It reminded me a lot of Pencil First’s game—GemPacked Cards. As this is a Kickstarter preview the artwork may not be complete, however the artwork that is in place works really well with the theme and mechanics and does a fantastic job of giving off a 80’s arcade style game feel kike Galaga and Missile Command.

The Good:
Everyone agreed the artwork really is the star of this game. The mechanics and game play work really well with younger gamers and new gamers alike making this a great cooperative gateway game. With the short play time it also works great as a filler game which we did during our recent Gobble Con.

The Bad:
More experienced gamers may find that Robots Love Ice Cream is not challenging enough, however I don’t think the game is aimed at them.

Overall:
Gamers who like light cooperative games with a fun theme and artwork will love Robots Love Ice Cream.