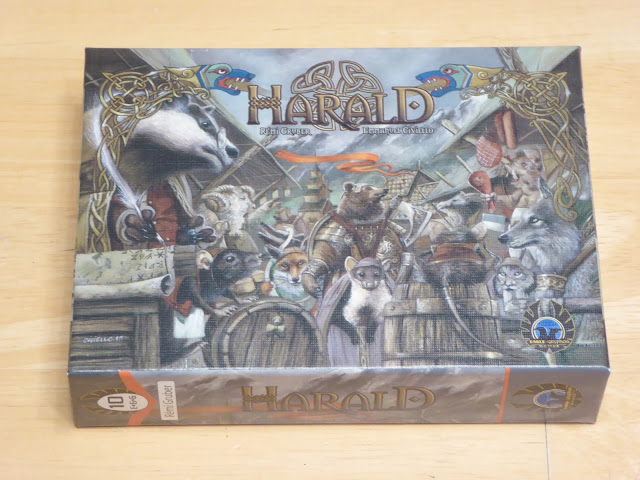 Send your emissaries to the King’s Council in order to gain favor and influence while also plotting the downfall of your adversaries. Do this well and your village will become the most prestigious in the entire kingdom.

In Harald players play cards into the King’s Council to gain influence while also playing into their own village to take advantage of special actions provided by the different characters and to increase the number of character types that match those in the council. It is a delicate balancing act and the player to do this the best will win!

To set up Harald players will shuffle the deck of character cards and deal each player five cards. The deck is then placed face down in the center of play as the draw pile then four cards are turned face up into the “reserve” (where players can draw from later). Lastly players will play one card into their “village” (in front of them). You are now ready to play.

On a player’s turn she will do the following three actions:

After a player has taken her turn play goes to the next player who takes the same three actions. This continues until a certain number of rounds have been completed. For example in a four player game it is six rounds. Players will know this because they will have seven cards in their village (six cards, one for each round, plus the starting card).
Once the game is over players will score their villages. Scoring is based on the influence of each character type in the King’s Council and the number of matching character types you have in your village plus any bonuses. For example if there were three Warriors (Bears) in the King’s Council and you had two Warriors in your village you would score 6 points (3 x 2=6). The scoring would continue for each character type then players would add in bonuses. Bonuses are based on the character types as well, for example the Scout (Wolf) gives players +2 points for each card that is face down in your village. The Bard (Fox) gives you 4 points if there are more Bards than Merchants (Lynx) in your village. Once all the points are added together, the player with the most points wins!
Harald comes with three variants, one which introduces a new character type, the Scholar (Badger), the Allegiance to the King variant which ignores bonus points when tallying the final score, and the Strength in Numbers variant which introduces team play in a four player game.

As you can see from above there are a lot of things to keep track of as you play Harald; the Kings Council, character powers, and end of game scoring bonuses. Although all of this may seem daunting Harald is fairly easy to learn as it is broken into three simple actions per turn. The rules are well laid out with good examples and there are reference cards to assist players with character powers, end game bonuses and the iconography. Harald is very accessible for advance players as well as those just getting started. Younger players will also be able to play and enjoy Harald. The box says 10+ which I would agree with, however with a slight rule modification discussed below my younger sons were able to play and have fun as well.

As easy as Harald is to learn it is much harder to master. Knowing the right time to play a card into your village for a certain power verses playing playing it to match cards in the King’s Council is a fine line. All the while keeping an eye on your opponents and end game bonuses—will you have more Bards than Merchants so you can get those four extra points? I would suggest the first time you play Harald to ignore character powers and end game bonuses and just enjoy playing to maximize influence in the King’s Council (also good for a younger player variant). For your next game add in the character powers, then after that you can add back in the end game bonuses.

There is a fair amount of player interaction in Harald and constant monitoring of what other players are doing so you can stay a step ahead of the competition. With that being said it doesn’t feel combative or aggressive as decisions to play powers or not are more strategic and can effect you as well as the other players. Game play works well with 2, 3, and 4 players with the length of play being pretty constant due to the different end game triggers.

The artwork on Harald is amazing! Emmanuel Civiello did an excellent job creating the breathe taking illustrations of the fantasy animal races. From the artwork to the components, everything is really top notch and high quality. Great job Eagle-Gryphon!

With the beautiful artwork, simple mechanics, and depth of strategy Harald is a winner. I have to say I really enjoyed this one and find myself wanting to play it again. And the best part is that my wife and kids also really enjoyed it, so I know it will be hitting the table again.

Although there isn’t anything negative to say about Harald I wonder how it will hold up over the long haul, after several months (or years) of playing it. I am not sure if there are any planned expansions, but that might help with long term re-play-ability. Introducing new races that can be interchanged with other races in the game would give a little different feel each time out of the box.

Players who like set collecting rummy style games will really enjoy Harald. Heck I think most game players will enjoy this one. There isn’t a ton of investment to be made monetarily or time-wise so it should be a no brainier.

I am giving Harald 8 out of 10 super meeples.

Check out Harald on: