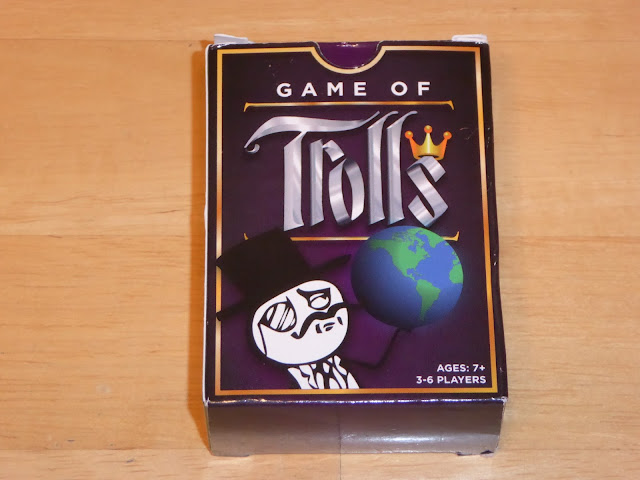 WARNING: This is a preview of Game Of Trolls. All components and rules are prototype and subject to change.

In the Game Of Trolls players are trying to be the first to get rid of all their cards, the player to do this wins. Sounds easy right? Well it would be if everyone else at the table wasn’t trying to do the same.

To set up Game of Trolls the deck is shuffled and each player is dealt seven cards. The deck is then placed in the center of play within reach of all players and the game begins.

On a players turn he plays a card or cards from his hand and resolves the text on the card if applicable. There are four types of cards a player can choose from; Green, Red, Gold, and Blue.

Note: all cards except Gold cards may be played as pairs (matching faces), however the text does not come into play when played like this.
If a player can not play a card he must draw a card.
Play ends once a player has played all of her cards. The Game of Trolls is meant to be played over several rounds with the winner and looser (player with the most cards) of each round being given special perks like choosing who goes first to making one person draw a card each time it’s the player’s turn to play.

Rules and Setup:
Set up, as you can see from above, is fast and simple. Shuffle the deck and deal each player seven cards and you are ready to play. The rules are also easy to follow making the game quick to learn and easy to teach.

Theme and Mechanics:
I am not 100% sure what the theme is suppose to be here. At first I assumed it was about internet trolls but after playing the game I am left wondering. Also the artwork does not provide any clues here.

Mechanically Game of Trolls is straight forward; play a card(s) from your hand or draw a card into your hand. It is very similar to UNO in that vein (mechanics), however the similarities end there.

Game Play:
As I have mentioned several times before the game plays quickly. The box says 20 minutes, however that is on the long side (unless they mean multiple rounds). I found most games (rounds) lasted 10-ish minutes, thus why playing multiple rounds is a good idea.

The age range on this one is 7+ which I would agree with, however I don’t feel like this game would appeal to kids due to the art style. At least it didn’t with my kids.

There is a lot of player interaction in Game of Trolls as players are mostly playing cards against one another that adds cards to each others hands in efforts to win the game. Typically “take that” style games don’t appeal to me however if I know that is the case going into a game I don’t mind it as much. Which is the case with Game of Trolls.

Artwork and Components:
So I am going to be completely honest here and just say upfront that I do not like the artwork on this one, it is not my personal style. I know there have been games published with this style so there must be a market for it, but it is just not for me.

This was a preview copy of Game of Trolls so the components I received are not final, however the cards were pretty good and the box was okay. I imagine through crowd funding that the components will be upgraded from this.

The Good:
My initial thoughts on this one were not good, however as I introduced this game to others and we discussed it’s merits it grew on me. Yes the game plays similar to UNO, but there is more to it that makes it a bit more interesting. The attack and defense cards are cool, but the gold cards make the game interesting and fun. When played the Gold cards typically have players doing something silly or refraining from doing something that is easily forgotten.

The Bad:
I think the most glaring thing for me was the artwork, it just didn’t appeal to me. I am also a little confused by the theme/name and wonder if something else wouldn’t be more fitting. Maybe I am missing something obvious.

Final Thoughts:
If you are looking for a light filler/party style card game this could be a good fit for you. It is easy to pick up and teach in a short amount of time and is sure to get a lot of laughs during play.

Players Who Like:
UNO, Karma, and other fast pace take that card games will enjoy Game of Trolls.

Check out Game of Trolls on: