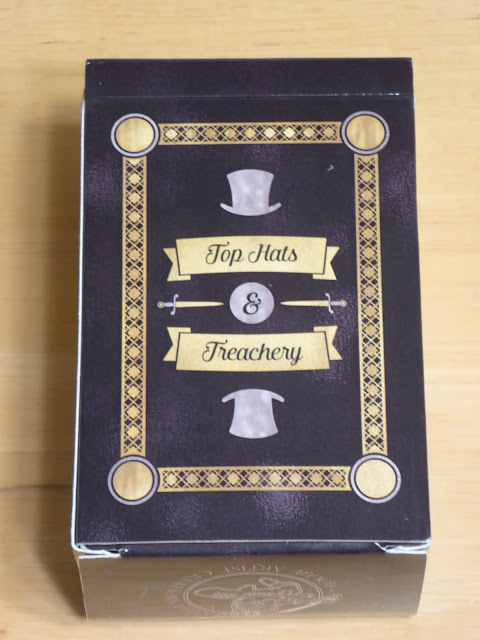 WARNING: This is a preview of Top Hats & Treachery. All components and rules are prototype and subject to change.

Welcome, as the owner of one of the most upscale hotels in all of Old London I have brought you hear for a bit of bad news. It seems that your guest’s reputation is being tarnished by some of your staff. And from what I hear your competitor is behind it. There is only one thing to do, fight fire with fire! With the help of the staff of your competitor’s hotels we can ruin the reputations of guests all around town. Don’t worry your hotel will come out on top!

Top Hats & Treachery is a game of back stabbing and rumor spreading that has you ruining the reputations of guests who are staying at your opponent’s hotels while trying to salvage the reputation of your guests. The player who can do this the best will get the Queen’s Royal Seal of Approval.

The game is played over three phases: Green, Yellow, and Red. Each phase has a different amount of rounds depending on the mode of game you are playing. And each round is made up of all the player’s turns. On a players turn (in the Dead Simple game mode) she will play a Rumor card from her hand and then draw a new one from the Rumor deck. For the Simply Deadly game a player’s turn may consist of: playing a card, stealing a opponents card, or drawing any different number of Rumor cards all depending on the roll of the dice at the beginning of that phase.

When a character dies the player who’s character it is draws a new character for free from the Lower Class deck. If the player would like they can pay one or two rumor cards to get a Middle or Upper Class character respectively. The Rumor cards are paid to the player who killed the character or if you killed your own they are discarded.

At the beginning of phases 2 and 3 players will refresh their hands either back up to five cards or down to five cards and each player will roll a dice determining what class of new character will be joining their hotel. There is room enough for three guest per floor, meaning three Upper Class, three Middle Class, and three Lower Class characters can be in the hotel at one time.

The game ends after the final round of phase 3 at which time players count up the total number of reputation points for ALL their characters—the player with the most points wins!

Rules and Setup:
Although the game seems simple enough to play I did have some questions about the rules that I needed clarification from the publisher on who promptly sent me the latest version. The new rules still had a few issues however we did get them all resolved. Hopefully all the little bugs will get cleared up before the Kickstarter campaign begins.

Set up is super fast and easy allowing players to get Top Hats & Treachery to the table right away. A big plus with any game.

Theme and Mechanics:
I really like the theme of hotel owners spreading rumors about other hotel’s guest, it makes for some good laughs. The variety of characters available really helps cement the theme as there are not only fictitious characters in the game but real characters from the Victorian time period as well.

The mechanics are pretty simple as you can see—play a card and draw a card. This works well with the theme as the cards are representing the Rumors that are being thrown around by everyone.

Game Play:
Top Hats & Treachery is a very quick and simple game which can be played easily in 15-20 minutes and is accessible by a wide variety of ages. It feels like a mix between a party game and a light card game.

There isn’t a whole lot of strategy in the game. You are either playing good cards on yourself or bad cards on someone else. The yellow cards and the Grim Reaper card is the best opportunity for strategy, I found myself playing the Grim on my own characters who had been woefully shamed. It was also useful against other player’s characters who had gotten too haughty.

There is no limit to the amount of rumor cards played on a single character and despite a few cards that are character/class specific there is no real rhyme or reason to playing a rumor card on anyone specifically. Playing too many good cards on a single character can make them a target so spreading the wealth is an obvious strategy to take. It seems like you could squeak out a little more game play by adding limits of some sort to make the decision of where to play your Rumor card more meaningful.

Artwork and Components:
The artwork is minimal and the visual effects are more about the card layouts which are very nice and functional. The photos used and the borders of the cards work well with the theme helping to tie everything together.

The components are prototype so I can’t comment on what the final version will be like, however what I received worked quite well.

The Good:
The flavor text on the Rumor cards are very clever and can create quite the humorous story line for a character. The fact that Top Hats & Treachery is easy to learn and quick to play makes it a great filler game.

The Bad:
As many of you know I am not a big party game player, most of the games in my collection are geared towards kids (because I have kids) or are more strategic/deep games. The lack of strategic choices in Top Hats & Treachery is a negative for me, however party game/light card game lovers should not find this a problem.

Final Thoughts:
Top Hats & Treachery is a lighthearted, backstabbing party game that is easy to learn and quick to play. It won’t be one that goes into my collection—for reasons mentioned above—but I could see it fitting into many others.

Players Who Like:
Gloom and party games with a little “take that” will like Top Hats & Treachery.

I am giving Top Hats & Treachery 6 out of 10 super meeples.

Check out Top Hats & Treachery on: