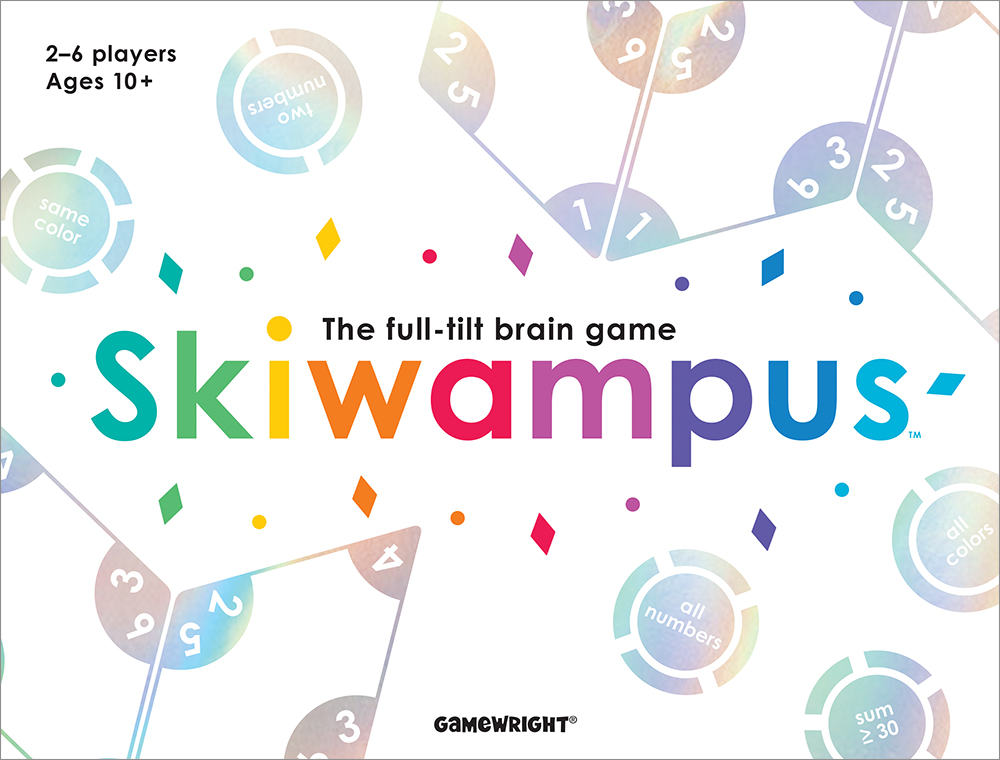 Numbers, Colors, Addition, hurry or you just missed it.

Skiwampus is a fast paced quick enjoyable game of seeing thinking and playing in hopes you can beat the other guys to the punch.

This game has many variations, but the main rule set will be covered in this synopsis.

To set up Skiwampus, each player is dealt 12 triangular tiles, and three challenge chips per player are placed in the center of the game.

When players are ready they flip over their tiles and start working to create circles that fulfill the requirements of the challenge chip. The diamonds each have six numbers and an associated color on them. Placing six in a geometric shape creates a circle that should attempt to match one of the challenges.

Once the chip has been played, those tiles are locked in place. And other formations can then be created on the other edges of the tiles. All the while other players are doing the same and grabbing the chips (sometimes the very chip you just figured out how to complete).

Play continues until all of the challenge chips are off the table. Trust me they go fast. One of your neighbors checks your work to make sure they actually meet the criteria. Any valid chips are saved by the player who played them.

Players then pass their tiles to the player on their left, Challenge chips (3 per player) are added back to the table and players play this way for two more rounds.

Players score points based on the difficulty of the challenges which is indicated by black edge marks on the tile (one point per). The highest total score after three rounds wins.

Rules and Setup:
I don’t know if I’ve ever explained a game, to others, in fewer words. Almost as fast as I could get the game out of the box, we were playing. The rules come with other versions which are also entertaining, some slower and some at similar pace.

Setup is easy. Deal tiles and chips and you are ready to go.

Theme and Mechanics:
No real theme other than numbers and colors which seems too elementary to describe the level of game play.

The mechanics are easy to understand and the speed and competition make something as simple as matching much more lively. The competition is trying for the same tiles you are, its all about putting the pieces together quickly and grabbing that chip before everyone else does.

Game Play:
Super fast game. Twenty minutes is probably accurate, but it seems so much quicker. Everyone is playing at once which improves the feel of the time.

The age recommendation is 10 plus, but I think it is easily played at younger ages. My 6 year old played with us, and while she struggled with the speed (the tokens were always gone when she put her circle together), she was able to understand and do all the tasks in the game. Other variations of game play would work better for the younger kids, but my 8 year old certainly was hanging with the rest of us in the speed game.

Artwork and Components:
Art, shmart. No time to look at pretty pictures. The box is nice with some foil prints. Otherwise, it’s colors and numbers. I wasn’t a fan of having the green and blue as separate colors. Can look the same when moving as fast as you need to. I could have used something that stood against all the others a little more.

This is the final version of the game currently available to retailers and for purchase. The materials are sturdy. The challenge chips are stickers on plastic tokens. A little higher quality would be nice, but for the price ($17.99 on Amazon right now), I think you get way more than you pay for.

The Good:
The quick play, competitive nature and understand-ability of this game made it perfect for filling time in a really fun way. My whole family loved it!

The Bad:
The only two things I could say negative is that the quality of the components isn’t perfect (they are good), and the game itself isn’t much to look at, but that also isn’t a deal breaker for me.

Final Thoughts:
The game is awesome. It is quick, easy and just deep enough to keep everyone loving it. The more we played it the faster it got. It can be adapted to allow more family members to play, or to keep the competition cut throat. This game was a winner in my house.

Players Who Like:
I’m going to suggest this game to people who like fast action games. I think of card games like speed, spoons or spot it. If you like racing to beat the guy playing next to you then this is a game you’ll LOVE!

I am giving Skiwampus 8.5 out of 10 super meeples.