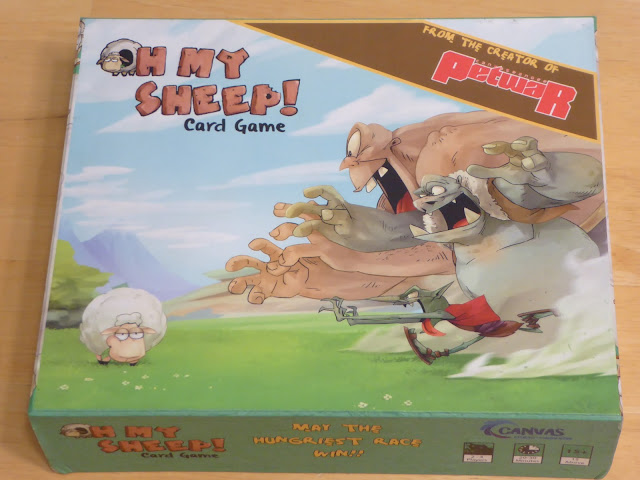 WARNING: This is a preview of Oh My Sheep! All components and rules are prototype and subject to change.

In Oh My Sheep players take command of one of three races in a fight over snagging the most sheep for their lunch. The player with the most sheep at the end of the game wins!!!

To set up Oh My Sheep each player will take one player mat and a Race deck of their choice. The remaining player mat(s) and Race deck(s) are removed from the game. The flock mat is placed in the center of the table and the Flock deck is shuffled and placed face down on that mat. The dice is then placed in reach of each player. Players will now shuffle their Race decks drawing five starting cards and place the remainder face down on the “deck” position on their player mat.

Players roll the dice to determine who goes first (high roll wins). On a players turn she will do the following steps:

The other action a player may take on her turn is to Hunt. Hunting can take place at any time during the turn and is how players collect sheep. Each creature card that is in the hunting position may roll to determine the success or failure of the hunt. The number of times a player rolls depends on the number in the upper left corner of the card which represents the number of creatures. For example a player who has two “2 Goblin” cards in the hunting position gets to roll twice for each card (four rolls total). A player is successful hunting when she rolls a 4-6, in which case she takes one card from the flock deck per successful roll and places it on her “flock” spot on her player mat.

Players may also hunt from an opponents deck, with both players rolling the dice high roll winning.

Once a player’s turn is over she discards all the cards in play and play goes to the player on the left. The game proceeds until the Flock deck has been depleted at which time players add up the number of sheep in their flock. The player with the most sheep wins!!!
Currently Oh My Sheep plays 2-3 players as there are three races: Orcs, Cyclops, and Goblins. I talked with the publisher and they will be offering a fourth race for a four player game – Imps. In addition during the Kickstarter campaign they will be offering additional cards for each race as stretch goals.

Rules and Setup:
Learning and setting up Oh My Sheep is a breeze. It only takes minutes to set up and about the same amount of time to learn how to play. Teaching others to play is also quick and players of all ages are able to pick it up.

The rule book I received is still a little rough but I am sure it will be ironed out during the Kickstarter campaign. Actually it’s not bad for a company not located in an English speaking country.

Theme and Mechanics:
The theme of Oh My Sheep is super fun—Orcs, Goblins and Cyclops fighting over a flock of sheep. Each deck of race cards really helps build the theme with special powers that match perfectly with the races. Cyclops have a big stomp and a big swing while the crafty Goblins can catapult, rocket, and steal sheep away from other players.

While very simple, the mechanics, work really well with the theme. Players are basically drawing cards and playing cards to gain points. But the “take that” element in the mechanics really gives you the feeling of fighting for these sheep.

Game Play:
The game play of Oh My Sheep is quick and smooth. Player’s turns generally move quickly as you aren’t doing a lot and you have thought before hand what your next move is. So down time is minimal.

The box says the game is for 15+ however my 7 and 9 year-olds easily picked up the game (and won). I would say the age range should be 8+. The box also has the play time at 20 – 30 minutes. I would say 20 minutes is closer to the reality with three players. Maybe the fourth player would bump this time up.

There is great player interaction with a lot of “take that”. I normally don’t enjoy games with a heavy “take that” element unless that is what the game is about. Similar to Killer Bunnies, you just go into it with the mind set of that is how it is going to be. There is also a fair amount of luck with the drawing of race and flock cards and dice rolling, but it is still very enjoyable as it stays somewhat balanced.

Artwork and Components:
The artwork on this one is AMAZING! When I first saw it I was immediately drawn in. There is a huge variety of cards for each race each with it’s own artwork. So there is a ton of art in this game and it all looks great. Hopefully I have done it justice with the photos I have included.

The copy of Oh My Sheep that I received is a prototype and thus the components are not final. I am hoping to see some high quality cards in the final version to really make this game solid. A custom die would also be a great touch. 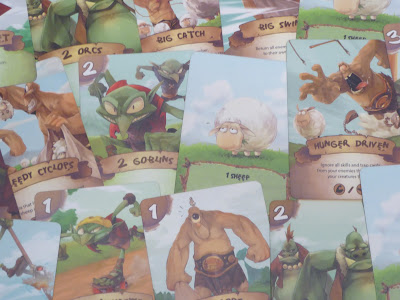 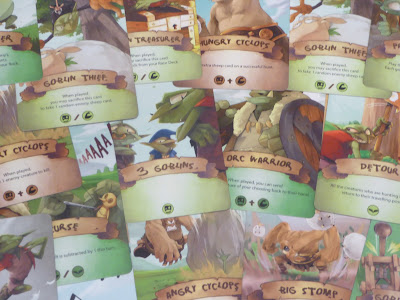 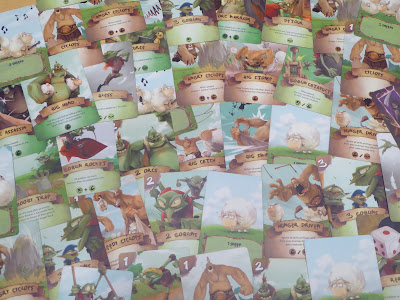 The Good:
The artwork, as mentioned above is fantastic, and really ties the theme and mechanics together. The game play is smooth and fast and super easy to learn. The theme is well integrated and the mechanics really emphasize the feeling of fighting for your lunch.

The Bad:
My only gripe would be that occasionally you can get a combination of cards that are over powered. I had one turn where I had three double Orc cards with the Big Hand skill card (which lets you take an extra sheep) and ended up getting 12 sheep on a single turn. My opponents had no traps which they could play that would stop this from happening. I was easily able to win that game. The great thing is the games are so short that we quickly set up and played again.

Final Thoughts:
Oh My Sheep is a great quick game for just about any game group. It works really well with younger kids and they will love the artwork. Quick enough to set up and play this makes for a great filler game or single game with multiple rounds. I am so excited to see what they do with the Kickstarter campaign with the stretch goals and add-ons. I am hoping to see a few more races come into play along with more cards for each race (as indicated).

This game will definitely be on my shelf and I may have to back the campaign to get the final version with all the goodies.

Check out Oh My Sheep on: