Today board games are more popular than ever, in fact many say we are living in a Golden Age of board games. I couldn’t agree more. As the popularity of board games increase the more we are seeing websites catering to online board game play popping up. And although this is not a new concept it has become more popular in the past few years with the advent of Tabletop Simulator and Tabletopia. But what about some of the sites that have been around for a while like BoardGameArena.com and BrettSpielWelt.de?

Well today we will be taking a look at one of  these sites that has taken an unusual angle at online board game play—HappyMeeple.com. 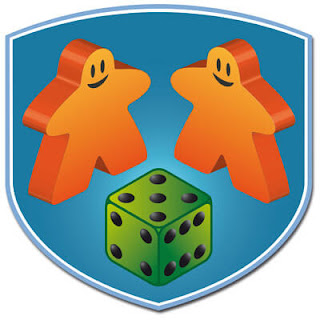 HappyMeeple.com is a unique mix between an online platform for playing board games and a city building social game. Players earn food in order to play games along with money and other resources to build up their town (farms, inns, castles, and markets). Each building give players more resources or opens up the website more. Players can also access other players in the Inn which acts as a lobby for the site. There players can chat or find opponents for their next game.

Playing board games on HappyMeeple.com with other players is simple—find a game, a player, and away you go. There are also different solo modes to use from tutorial to advance that makes for a great experience no matter what your gaming level.

Here are some screen shots from the site itself:

I was able to reach out to Nicolas, owner and developer of HappyMeeple.com, and ask him a few questions. Here is what he had to say about his site.

EBG: What is your background both professionally and in board games?
Nicolas: I graduated as a chemical engineer. But I spent most of my time as an software developer. I got an expertise in Artificial Intelligence along the way.

I have always loved board games. But I delved into it more around 2009. Before that I used to compete in international draughts. I also I also had a transitional period when I played Poker and Backgammon a lot.

EBG: When did you launch HappyMeeple.com?
Nicolas: Happy Meeple was launched in March 2012.

EBG: What was your inspiration for HappyMeeple.com?
Nicolas: At the time I was playing Carcassonne a lot on my iPad as well as other board games. I had also looked at the craze around games like FarmVille. I thought there was some room for a middle ground : A platform where simple board games could be played by many people, not only regular board gamers. Of course one had to find the right games. Simple enough to be easily understood but deep enough to ensure a high replayability.

EBG: Are any of the titles on the site your design?
Nicolas: No, all games are from famous game designers : Knizia, Stockhausen, Kommerell, Risthaus who have had many games published. This said, I have designed a fishing (dice) game that is ready to be integrated into Happy Meeple. Players would go to the port once a day to play that game and earn some food (which means play time).

EBG: The library of games currently on the site is limited, what is your plan to expand that?
Nicolas: We have already signed one extra game and look forward to adding more in the future. Most of the features that we wanted in Happy Meeple are now developed so we will now have more time to add more games. This said we are very selective about our games.

EBG: What other plans do you have for the site?
Nicolas: We will expand the metagame. We are in the process of adding daily quests to the platform. They will reward players with King’s favours which help customize the world. Hopefully there will also be more things to build in the world. A tournament lobby would be great too.

I love playing board games and the more options there are the better. And HappyMeeple.com presents another great way for us gamers to meet up and play.

All-in-all HappyMeeple.com is a fun website to play board games on. I enjoy the metagame aspect as it draws me back to the site to work on achievements and advancements. My only reservation at this point is the limited amount of games in the library (7 at the time of this writing).

I  really appreciate the time Nicolas took with me and opening up the site up so I could get a really good feel for it. If you haven’t already done so check out HappyMeeple.com and play some games today!