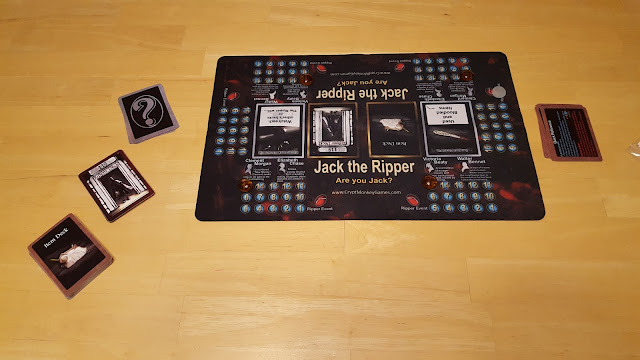 WARNING: This is a preview of Jack the Ripper. All components and rules are prototype and subject to change.

It is London 1888 and you have been invited to a scavenger hunt party at a warehouse, sounds like fun right? Well one of the other guest happens to be none other than Jack the Ripper. What starts as a night of fun ends up being a night of terror!

More About Jack the Ripper:

To set up Jack the Ripper the play mat is placed in the center of play (if available). The Item and Ripper decks are shuffled and placed in the center of play with each player being dealt three Item cards each. Players remove the Jack the Ripper card and cards equal to the number of players minus one from the Character deck to create a new Character deck. This deck is shuffled and each player is dealt one character card each. These character roles are kept secrete throughout the game unless otherwise instructed.

Lastly players place a marker on the “15” space on their Life Counter card or on the playing mat. Players are now ready to play.

The object of Jack the Ripper is to either eliminate Jack OR if you are Jack to eliminate all other players. To do this players will use Item cards from their hands to deal damage to one another until player(s) health hits zero. So lets see how this works.

On a players turn she will draw one card from the Item deck into her hand and then choose one card to play from her hand. Players may also pass if they do not have a card with the straight razor symbol on it. Players may also play special cards from their hands at any time or in defense or as designated on the card.

Most Item cards are an attack of some sort to be played on another player while other cards will deflect attacks, heal damage, or manipulate player’s hands.

Players will continue taking turns until the last player has gone at which time the players will draw and resolve the top Ripper card. Typically these cards are not good unless you are Jack. After the Ripper card has been played play will continue with the starting player.

Artwork and Components:
As a pre-production copy the artwork may not be final so I will hold my thoughts on this. I will say the iconography is simple to follow and the instructions on the cards make play easy and straight forward.

Again with this being a prototype the components are not representative of the final product, however the playing mat was a good addition to the game and the quality was also good.

Rules and Setup:
Set up is super simple and quick as there are not many components to deal with. The rules are short and sweet, however I would like to see them cleaned up a bit as it took a few times reading through to get everything straight.

Theme and Mechanics :
Jack the Ripper is a interesting take on the Social Deduction style games. Instead of using a voting mechanic to eliminate players from the game cards are used to deal damage until elimination occurs. I have not seen this before in this style of game but then again I have not played many social deduction games.

The theme itself is a little dark for my taste, but shouldn’t be an issue for many other gaming groups.

Game Play:
Game play is really smooth and straight forward. It also plays quickly, I would say 10 min on average if everyone is awake at the table.

There are not a lot of choices to bog things down and the Ripper cards really throw a wrench into things each round.

The Good:
As mentioned above Jack the Ripper is a great take on the social deduction game genre. Sets up fast, and is easy to learn and play. It works perfect as a filler game for more mature audiences.

The Bad:
For me the theme is a little too dark (PG 13), but this is coming from a guy who mostly plays with his kids. I am sure that with my adult gaming group this would not be an issue. The artwork also does not seem polished at this time. This may change with the final printing.

Final Thoughts:
I haven’t played a lot of social deduction games in the past, however from what I have I really like this take on it. I will be looking forward to how the final product turns out.

Players Who Like:
Players who like Werewolf, Mafia, and other social deductions games will love Jack the Ripper!