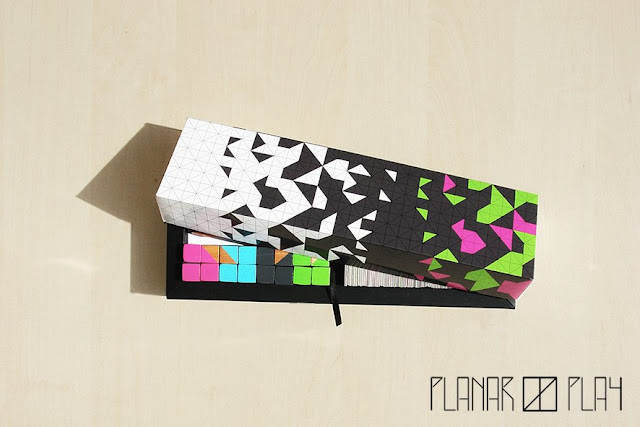 You and your fellow space colonist have been sent to the far reaches of space to explore and settle the giant ocean planet of Neon. The colonist who does this the best will be the envy of the universe and the winner of the game.

The object of Islands of Neon is to create and claim islands on an ocean planet in order to score the most victory points by the end of the game.

On a players turn they will draw one tile from the unused face down draw pile and place it into play using the following rules:

There may be times where two players have claimed the same island in which case it is a tie and both players receive the full points.

The game ends when the draw pile has been exhausted. Players then score incomplete islands gaining one point for each tile (not triangle) that has a portion of a claimed island on it. Players add this to their existing scores and the player with the most points wins!

Rules and Setup:
Setup is extremely fast as players grab a set of cubes in a single color, place the starting tile in the center of play, and create a face down draw pile with the rest of the tiles. Players will also need to keep score on a pad of paper which is included. That is it, you are ready to go.

The rules are so simple and short that they are literally printed on the inside of the box lid. There were some clarifications that I need to get as some information missing, however they can be figured out intuitively or by asking.

Theme and Mechanics:
The space theme is kind of an after thought here as there is really nothing to keep it from being any other theme or just an abstract game. That being said I like the space theme and it works well as a back story.

The tile laying and claiming mechanics at play here are tried and true mechanics which will feel familiar to many gamers with some slight modifications.

Game Play:
Game play is quick and simple: draw a tile, place a tile, and claim an island. While there is not a ton of player interaction the interaction that does occur will keep you on your toes as opponents will try and steel islands right out from underneath your nose.

The game plays in about 20 – 25 minutes which is in line with the suggested time frame. And it plays that quickly regardless of the number of players.

Islands of Neon is also very accessible for younger players. The age recommendation of 7+ is spot on. I had our 7 year-old playing and he had no problems at all.

Artwork and Components:
The artwork is abstract/non-existent, but looks cool when put together. For me it would have been nice to see some actual artwork here to reflect the theme. Maybe some cool island scenes with alien plant and animal life.

The components for Islands of Neon are awesome. This is an ETSY product so I assume a great deal of it is hand made. My hats off to you Planar Play. First off the box is amazing (see image below) inside and out. The tiles are equally impressive, not only are they high gloss (bad for pictures) but they are also a great thickness. The wood cubes are good, but you can tell they are hand painted which is not an issue.

The Good:
Everything from the components to the game play really works well. I am a fan of tile laying games and the fact that Islands of Neon is simple and quick means I can play it with my younger kids.

The Bad:
Alright, time to point out the big huge elephant in the room. Islands of Neon plays very similar to Carcassonne, and to be honest when I first took a look at the components and rules I was very concerned about this. In my mind I was thinking it is basically is a simpler version of Carcassonne, so why would someone want to play it over the real thing?

After playing through it a couple times I found that the ease of play and the lack of rules was attractive to members of my gaming group and it wasn’t as big of a deal as I thought. For me I would like to see a little more added, maybe a variant to expand game play and add some depth for when I am not playing with my kids. But then again I have Carcassonne for that.

Lastly I am not a fan of the abstract look of the game and as mentioned above I would have like to see some artwork to accentuate the theme more.

Final Thoughts:
If you are looking for a quick filler game that plays like other popular tile laying games this would be a great match for you. Like I mentioned above I like that it is fast and simple making it easy to play with my younger kids. I am not sure this one will make it into the collection as my shelves are getting full and I can’t see this one getting pulled out as often as Carcassonne.