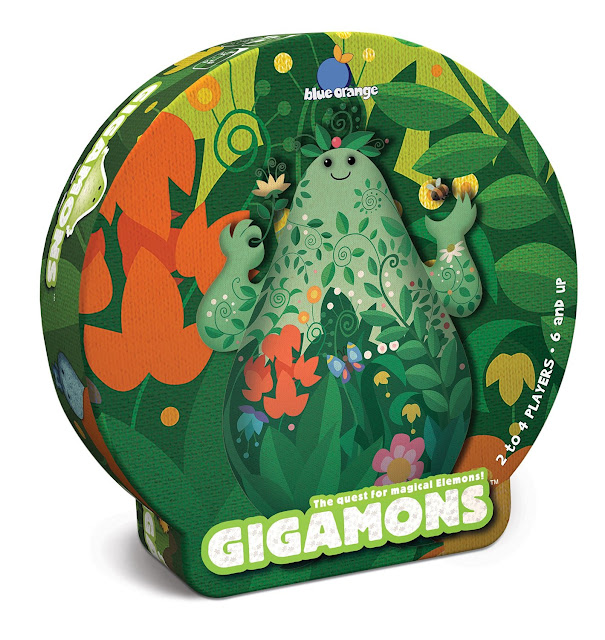 Welcome fellow wizards you were invited here today to test your skills to see if you are fit to join the wizards’ guild. Are you fast enough to catch the elusive Elemons in order to summon the mighty Gigamons? Wait, what?

In Gigamons players are trying to collect sets of Elemons (cute little magical creatures) in order to summon their corresponding Gigamons (larger cute magical creatures). The player who does this the best (i.e. has the most Gigamons) by the end of the game wins and becomes the Elemage (fancy name for winner)!

To begin the game players shuffle the Elemon tiles and create a face down 3×3 grid of tiles in the center of play with the remaining tiles being placed face down in a near by draw pile. Players then set the Gigamons to the side along with the rock tokens.

On a player’s turn she will turn over two of the Elemon tiles from the center grid. If the tiles match she takes the two Elemons placing them in front of her and triggers the Elemon’s power (see below). If the tiles do not match they are flipped back over and the next player takes his turn.

Elemon powers include taking a random tile from the draw pile, making another player discard an Elemon tile, peeking at four face down tiles, placing a rock on a tile so other players can’t take it, taking another turn, and automatically matching any other Elemon.

Once a player had collected three Elemons of a single type they may turn them in to “summon” or take the corresponding Gigamon from the supply pile or from another player who has already claimed that Gigamon.

The game ends when one player has claimed three Gigamons or if the draw pile of Elomons is exhausted and there are no more matches to be made the player with the most Gigamons wins!

Rules and Setup:
As you can see above setup for Gigamons is very simple and quick taking no more than a few minutes.

The rule set for Gigamons is one of the best I have ever read. There are twelve simple steps that are very easy to follow with a text explanation and a picture. It starts with setup and runs through winning the game and clearly spells everything out in between. The reverse side explains the Elemon powers in detail and is easy to follow along with.

Theme and Mechanics:
I really enjoy the magical theme going on here with the collecting of Elemons in order to summon Gigamons. It really feels like an old school trading card game with the cute characters and unique powers.

This is a memory, matching and set collecting game with some cool upgrades. It is like they took Pokemon and combined it with Memory taking the simple game play of the latter combining it with the excitement of the prior.

Game Play:
The game plays quickly, the box says 15 minutes and I would agree with that. As I said in my last review I love games I can learn quickly while my kids wait. Keeps them from becoming disinterested and finding something else to do.

As I also mentioned in the previous review I like that fact that my kids can grab this game on their own and play anytime.

The game plays well with two, three, or four players and all ages four and up (the box recommends 6+).

Artwork and Components:
The artwork for Gigamons is amazing! I want to hang up posters of all the Elemons and Gigamons. 🙂 No seriously the artwork is stunning, Marie-Anne Bonneterre did an amazing job. Here are some pictures to give you and idea of how good it is.

The components are equally amazing. All the chipboard is thick and high gloss—this includes the tiles, Gigamons, and rock tokens—which will withstand the amount of game play this game will see. The box is also very unique in it’s shape which is fun to look at but maybe not as much fun to get on to the shelf.

The Good:
Number one on my long list of good things is the artwork. Seriously I am in love with these characters. Second is the rule book, when I start the rules of my own game I will be looking closely at this rule book for ideas. Third is the great modification of the game Memory. And last but not least is the fact I can easily play this with all my kids (over 2) and still enjoy it. See you later Candy Land!!!

The Bad:
Nothing, nota, zilch! This game is great!

Final Thoughts:
I can’t recommend this game highly enough for families that have players in the four to ten range. Your kids will love it! It is so easy to learn and teach while being equally fun to play. This is an automatic shelf spot earner and will get played a lot.

Players Who Like:
Memory games and Pokemon style games will love Gigamons!!!

I am giving 10 out of 10 super kid meeples.
Check out Gigamons on:
BoardGameGeek.com
Purchase Gigamons at:
Amazon.com 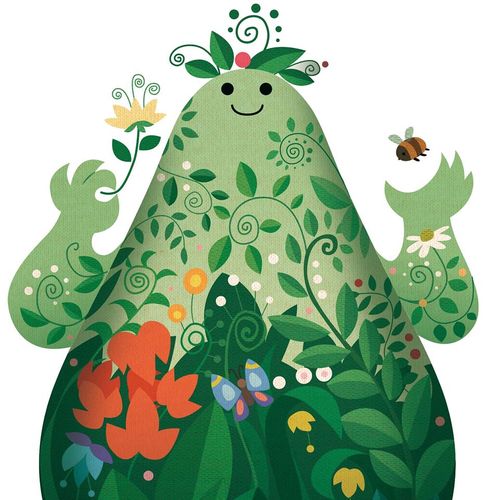