In 93 days voters will head to the polls to determine the next president of the United State of America and with that vote they will determine how this country will be shaped for the next four to eight years.

In Agenda players will take on the roll of a presidential candidate of one of seven different political parties contending for the top office, however the consequences of this election isn’t as serious or dire. 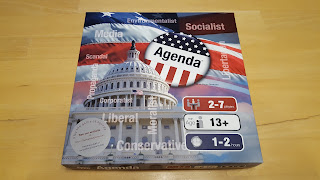 In order to move into 1600 Pennsylvania Avenue players will be competing to finish three (or more for a longer game) of their Planks/Agenda Items on their party (character) card.

Over the course of the game players move around the board by rolling a dice and landing on or passing over Agenda spaces on the board. This is where/when players can enact Planks/Agenda Items by paying 1 million votes and $500,000 per Plank/Agenda Item.

Players gain votes and money on various spaces around the board and through cards that will be drawn. There are seven different types of cards that either help or hinder players progress to completing their goals. Some of the cards include political trivia that rewards correct answers with 300,000 votes.

Candidates may also buy politicians to gain additional votes while traveling around the board and they can land on Election spaces where a snap shot vote is taken. The player with the most votes can then take votes or money from another player.

The game ends when a player has achieved her third (or the pre-determined number) Plank/Agenda Item.

Rules and Setup:
The rules for Agenda come on a legal sized page and covers all the rules nicely. They are clear and concise and don’t leave much up to the imagination which is a good thing. Being one page front and back makes them easy to reference throughout the game.

The initial set up takes some time as you will be putting the components together, but after that it should go smoothly. There are a lot of components however they all have their place. In fact the game comes with a trey that holds all the decks of cards (if you want to use it) and even has a place on the board to put it.

Once the game is finished it can quickly be put away.

Theme and Mechanics:
The theme of this one is pretty obvious and seems to becoming a popular one. I have seen quite a few pop up recently and it is interesting to see how everyone does it a little differently.

Agenda uses a roll and move mechanic to move around the board with a small amount to resource management. As stated above there is also some trivia involved which I think is unique to this particular politically themed game.

Game Play:
The game play is very auto driven. Players roll the dice move to that space and resolve the action.  This could involve drawing a card and resolving it or just resolving the text on the board.

There is a little player interaction as some of the cards and spaces allow you to steal votes and money from your fellow players which gives it a “take that” feel at times.

As mentioned above there are trivia cards that come out at times and man are some of the questions absurdly hard. I am not sure we got more than a couple questions correct.

The game plays in about 45-60 minutes when going for three Planks/Agenda Items which seems in line with the recommended time frame. The 13+ age recommendation seems a bit high, I could see it being more around 10+.

Artwork and Components:
The components for Agenda are pretty good from the card stock, the plastic poll markers, card stands to the player pawns. I wasn’t a fan of the paper money.

The artwork in this one looks like they pulled together a bunch of clipart images from around the web. Some of it is cool and it would have been nice to see it carried throughout the entire game. Also there seems to be a lack of cohesiveness in the way the board and cards are laid out (fonts, colors, etc…)

The Good:
I really like the theme and could see myself enjoying a run at the presidency. Fund raising and hitting the road to garner votes could make for an interesting game with the right mechanics.

White Rabbit did do a good job with most of the components and boy did they pack a lot into this box!

The Bad:
For me the mechanics just weren’t there and I was not immersed into the game like I wanted to be. Also the artwork fell a little flat even though there was some potential there.

Final Thoughts:
For me Agenda just didn’t scratch my politically themed itch, so it will not be going into my collection.

Players Who Like:
I could see players who enjoy political trivia really liking this game as there are some really great political questions.