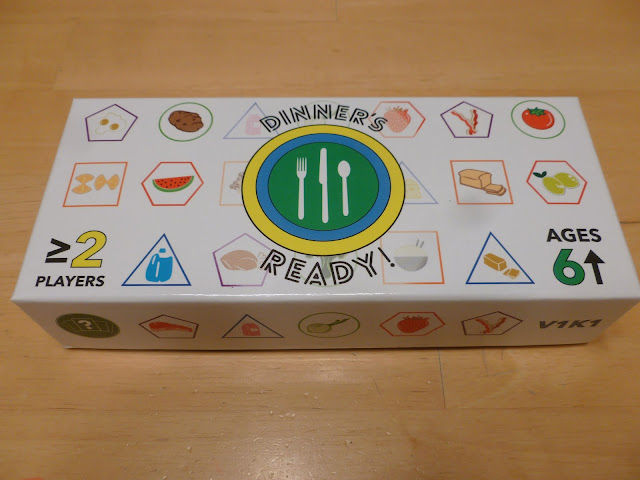 One of the things I really love about board games is the educational value they provide. For some games the educational factor is a byproduct of the game play while other games it is the main intention. Such is the case with our latest game up for review—Dinner’s Ready—from Mystery Tin Games.

Dinner’s Ready was created by Christopher Eaton to help parents find a fun way to teach their kids about the importance of eating healthy. So, let’s dig in! 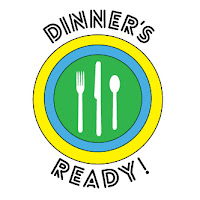 Set up for Dinner’s Ready is quick and easy. There are two decks of cards; Recipe and ingredients. Both decks are shuffled and players are each dealt five recipe cards and four ingredient cards. Both the recipe and ingredient decks are placed face down in the center of play. Players then choose three recipe cards to keep while the discarding the other two. Players should try and keep one of each type of recipes; appetizer, entree and dessert.

Once players have chosen their recipe cards the game is ready to begin. The player to the left of the dealer will go first. On a player’s turn she may perform one of four actions:

Once a player has finished their turn play moves clockwise to the next player. Players must keep an eye on the discard pile as once per turn (in between turns actually) a player may “snatch” a card off the top. The player who snatched the card must then discard down to four cards.

There is something else players have to watch out for and that is rotten ingredients. These ingredients may be given to another player instead of an ingredient which will cause them to loose their turn.

Play continues until one player has completed one of each of the three recipes; appetizer, entree and dessert. The player to do this wins!!!

Artwork and Components:
The components of Dinner’s Ready are solid. The box is sturdy and fits the cards nicely with a small amount of room to spare. The wrap on the box is nice and the insert is very functional. The cards are also good quality, easy to shuffle and a decent thickness to hold up to younger players.

Rules and Setup:
As you saw above the set up for Dinner’s Ready is very simple and quick. I was up and running with in a few minutes which is a bonus for any game.

The rules are short and sweet although I found there was a need for clarification on a few points. For example the rules don’t state at which times a player needs to discard down or draw up to the hand limit.

Theme and Mechanics:
The theme of Dinner’s Ready is very strong as you defiantly feel like you are trying to put together a dish using certain ingredients.

The main mechanics at work here are set collecting and hand management. This works well with the theme bringing in the feeling of searching through your fridge or pantry for the right ingredients to finish your dish.

Game Play:
Game play is sluggish as players work hard to find the correct ingredients for their recipe cards. It seemed like several rounds would go by before someone could find one of their needed ingredients. I felt that this was due to too many different types of ingredients and the fact players would continually go back and forth taking the same card from one another.

The Good:
Dinner’s Ready is a good educational game that teaches about food groups and creating a balanced meal. It is easy to set up and can be played with the whole family.

The Bad:
As mentioned above the game play was a little sluggish and some of the rules are unclear. I am sure that some house rules would ratify this issue.

Final Thoughts:
For parents looking to teach their kids about food and nutrition, this is the game for you. Unfortunately the fun factor for me was low and I don’t see Dinner’s Ready hitting the table a lot.

I am giving Dinner’s Ready 5 out of 10 super meeples.
Get your copy of Dinner’s Ready at Mysterytingames.bigcartel.com.
My Favorite Educational Games