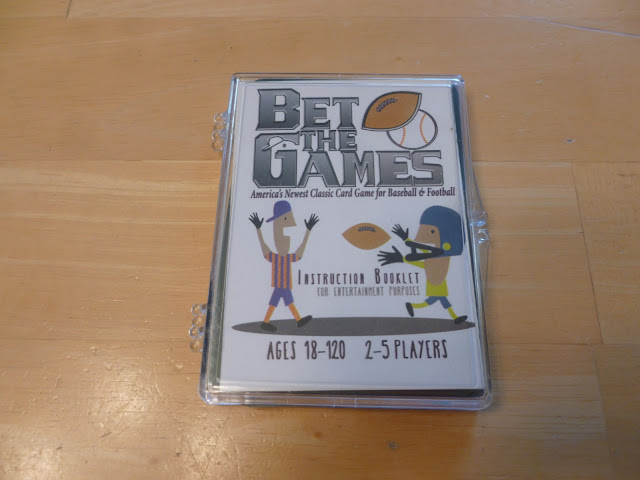 Born in Colorado I was raised on Broncos football, and have since become a huge sports fan. So when I was contacted to preview Bet The Games I was excited to combine my two passions—board games and sports. Unfortunately it is baseball not football season! I guess I can do this review anyway.

In Bet The Games players wager (whatever they want) on plays from real sporting events based on the cards in their hand. Don’t believe me? Well, check it out?

Note: the game I received is a prototype so components and game play may change.

More About Bet The Games:

Bet The Games is played while watching a real football or baseball game, so players should either be attending one live or have one ready to watch on TV.

The game comes with three decks; play cards, turn cards, and game cards. Play cards represent either the down the play will take place on or the batter in that number order. Turn cards are used in the variation for a draft like mechanic. Game cards are plays that could happen during a game like a strikeout or touchdown.

To set up a basic game select a play card at random or by choice then deal each player an even number of game cards. Finally players should decide what to wager, I would suggest poker chips or M&Ms.

This continues for as long as the players want—the entire game or just an inning or quarter. The player with the most poker chips or M&Ms at the end wins!

A variation of Bet The Games uses the turn cards which are shuffled and dealt out to each player so they have an equal amount. Players then use these cards to select (or draft) their game cards based on what they think will happen. For example the play card chosen for the football game is the number one (or first down) and player three has drawn the number “one” turn card so he chooses the “quarterback hand-off” card assuming this to be a safe first down play. Player one has the number “two” turn card and takes the “incomplete pass” card. This continues until all the turn cards have been used.

Play then resumes as normal with the player holding the correct game card winning the pot. In this case the quarterback did hand off the ball so player three wins the pot since he was holding that game card.

Artwork and Components:
The illustrations for Bet The Games is very unique. Some players may not like the style but I feel it is very whimsical and fits the game well.

The layout for the cards is great. I especially love the duel use of the cards. All the icons and text are easy to read and follow.

The quality of the cards is a little suspect as they are hard to shuffle and easy to bend. I ran into this same problem with the games I reviewed from GaGa games, however this might not be the same material the final game will have. Also there are just a few cards so shuffling is not a big concern.

The other concern I have which will more than likely be alleviated with the final printing is the box the game came in—a plastic snap case (not sure that is the correct name for it). The box is too thin for the number of cards in it and falls apart as I am opening and closing it. I think in the end I would like to see a tuck box or small card board box used.

Rules and Setup:
The rules are short, easy to read and fairly complete. I didn’t find any major issue as I was trying to play through the game the first time or since. Set up is also a very short process only taking a couple minutes.

I was concerned that with plays happening so fast I would not be able to get ready for the next play in time, but as I said before it goes fast. Players are only shuffling the game cards and re-dealing when needed.

Theme and Mechanics:
This is 100% a wagering game. There is some strategy that comes into play when determining how much to wager based on cards already played and the situation going on in the actual football or baseball game. Also the variation ads some strategic depth with having a “draft” of sorts for the game cards.

Game Play:
Bet The Games plays very well and moves along quickly as there are few choices being made. The tempo of the game is dictated by the sporting event being watched but the turns within that happen quickly.

The only issues that you may run into are plays that happen in the sporting event that you do not have a game card for. In those cases players come to an agreement or omit the play and move on to the next.

The Good:
This game is small, easy to learn, easy to set up, and easy to play. Being small it can go anywhere with you. In fact I took it with me on my trip to Boston where I had hoped to catch a Red Sox game. Unfortunately that did not happen but I was still able to use it elsewhere since it fit nicely in my pocket.

The Bad:
There isn’t a lot bad here as the decision to buy this game will come down to preference. If you are a sports fan or spend time with one this will be a good game for you to pick up. If not you probably won’t be interested.

I hope at some point the Finn’s branch out into other sports, although I can see logistical issues there as other sports may not have a clear stoppage in play and set plays like hockey and basketball.

Final Thoughts:
Although I love sports and sports themed games along with bidding/wager games I can’t see Bet The Games getting off the shelf very often as my kids are young and don’t watch sports and my wife does not like to watch sports. That being said as my boys get older things may change as their interest in watching sports increases.