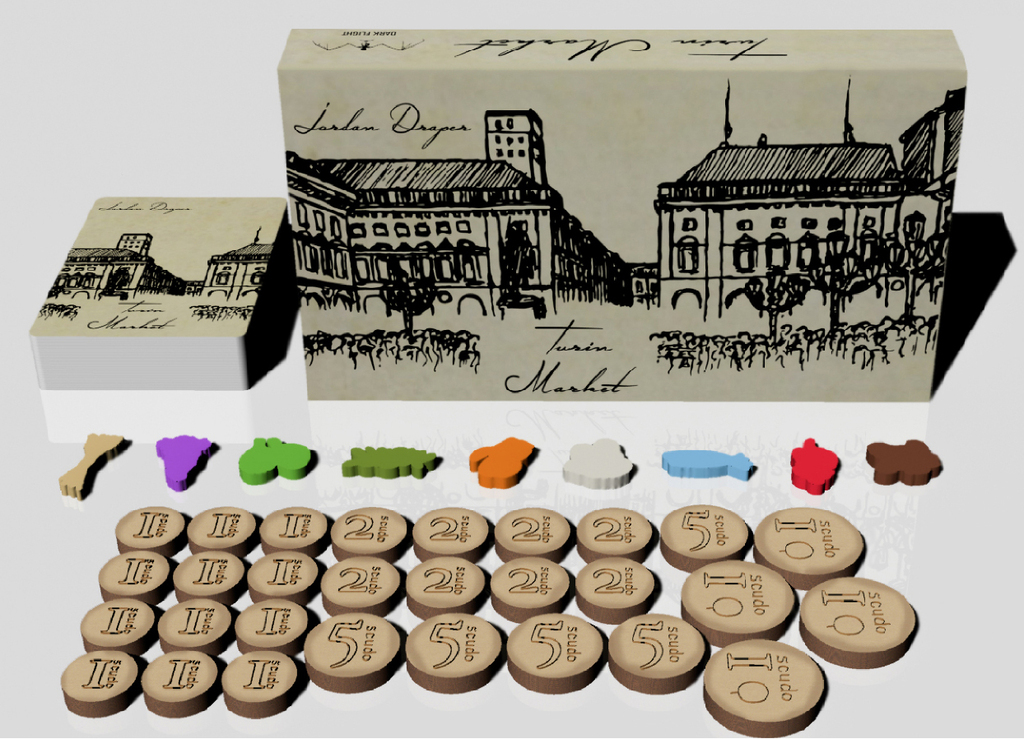 Turin the capital city of Piedmont in northern Italy, is known for its refined architecture and cuisine. The Alps rise to the northwest of the city. Stately baroque buildings and old cafes line Turin’s boulevards. And grand squares like Piazza Castello and Piazza San Carlo add a unique feeling to this quaint city.

In Turin Market players are transported back to 18th century Italy as shrewd goods traders trying to become the most powerful trader in the market. 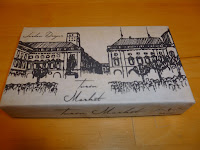 To set up a three player game of Turin Market each player receives fifteen scudo and an end game reference card. The eighteen product cards are then shuffled and each player is dealt six cards. The remaining scudo and loan cards are placed off to the side for later use. Note one card in the two and three player game will be held secret in a player’s hand until the end of the game.

Once set up is complete players will enter the first Auction phase. The game consists of five Auction phases that are broken into the following steps:

After the final cards have been auctioned off the game ends and the final sales are completed. Each card has three types of goods listed, three of one, two of another, and one of another. Players will look to see who has the most of a single good (like fish) and that player will receive the value listed on the end game reference card and one scudo from each player. For example the player with the most fish would get five scudo plus one scudo from each player. Players do this until all goods have been paid out then players pay back any loans they took. The player with the most scudo wins!!!

Theme:
I love the theme of Turin Market—buying and selling goods in an old world market. The game could have many different themes, however I like how this theme fits the mechanics and game play. I will mention more about this below but the artwork really lends to tying the theme into the game.

Mechanics:
The mechanics here are simple, set collection using blind bidding. This mechanic works really well especially when playing with more than two players. I have recently reviewed another game—Port of Piraeus—that has similar mechanics of set collection based on bidding but is used a little differently. 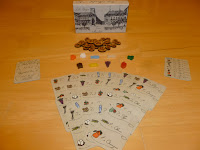 The artwork in Turin Market is very simple yet elegant. It lends well to the feel of 18th century Italy. The writing is a little hard to read but the iconography more than makes up for it. Jordan not only designed the game but also did the artwork. Well done!

The Good:
This game plays quick, so it is a great filler game. It is also small so it can easily go anywhere you want to go. I love the simple yet interactive mechanics going on here and the solid components.

The Bad:
The game plays great with three or more players but is a little predictable with two players. I would love to see a good two player bidding game.

Final Thoughts:
If you are looking for a quick filler game that will appeal to many gamers, this is the one. Great art great game play.

I am giving Turin Market 4 out of 5 super meeples.