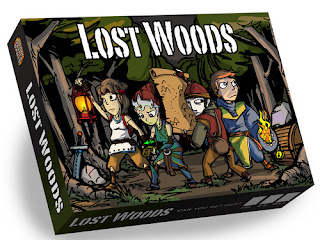 “Lost Woods is a map exploration game where lost adventurers defeat enemies with powerful weapons and magic to earn gold. Can you escape?

Players start at camp in the middle of the Lost Woods, equipped with only random household items. Each turn, players move along the map and explore new areas by laying down a card that represents a place on the map. Exploration leads to new weapons, enemies that block the way, gold, magic spells, and a sneaky gnome that steals your gold.

Enemies are fought with a simple dice mechanic. Each weapon and enemy rolls a single dice, and their power varies depending on the number of sides to the dice, from d4 to d20. Each victory is rewarded with a number of gold pieces.

When someone gets close to leaving the Lost Woods, the Guardian appears to block the way, and provide a large amount of gold for anyone who can beat them.

The game ends when someone finds a way out of the Lost Woods. The winner is the player with the most gold. If players are tied, they must battle each other.” 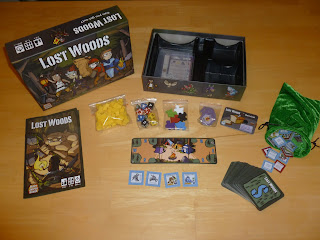 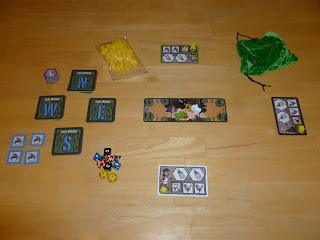 To set up Lost Woods each player chooses a character—taking the associated character card and character token—placing the card in front of them and the token on the starting tile which is placed in the center of play. Each player then takes one gold token and places it in their supply.

Players shuffle and create draw piles for the North, East, West, and South map tiles and place the “bottom of deck” tiles at the bottom of their respective decks. These decks are placed out of the way on the table. Each player then takes one D6 weapon from the item and monster tokens to add to their inventory on their character card. The remaining item and monster tokens are then added to the draw bag which is set to the side. Gold, magic spells, and guardian tokens are all set off to the side as well. The dice are placed with in reach of everyone, and you are now ready to begin.

Please note the map gets very large over the course of the game so leave yourself plenty of space to expand. 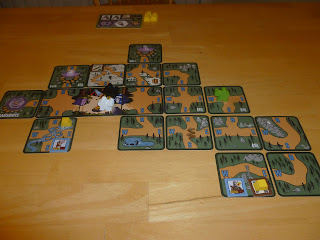 After the starting player is chosen each turn is broken into three steps:

The game ends once a player finds an exit tile and moves past it. IE defeats the Guardian and moves/explores beyond that tile. Guardians are like monsters except much more powerful and take three attacks/rolls to defeat. The game also ends if the map closes and there are no other ways to explore.
At this point the player with the most gold wins! 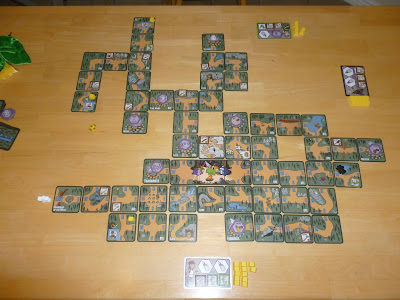 As a Father of three young gamers and one soon to be gamer I was excited to check out Lost Woods. Although this game is not heavy on strategy it is very entertaining. From exploring and fighting to the not so typical weapons and monsters this game will appeal to many gamers.

Theme:
I am a little lost (pun possibly intended) when it comes to the theme of Lost Woods. Although there are many elements from the typical fantasy setting there are also modern touches that throw me for a loop. One minute you might be fighting a skeleton with a sword and the next you are in mortal combat with a killer gold fish using a crescent wrench. Who knew? Let’s call the theme quirky fantasy, because it is well…quirky. As you explore the map make sure and take time to look around as you may find a monster hiding in an outhouse or the way back home from Narnia.

Mechanics:
The mechanics for Lost Woods are simple, straight forward and typical for a dungeon crawl game. Move, explore, and roll to resolve battles. This isn’t a bad things as it works well and the game is quite enjoyable. The mechanics are also quick to teach and very accessible for all ages of gamers.

The components and artwork are wonderful! All the cards and tokens are of the highest quality. There is also a great functional insert in the box for organizing the game once you are done. The artwork is superb and really fits the whimsical nature of the game. As I mentioned before you can spend a lot of time just looking closely at the map tiles to see what hidden things you can find.

The Good:
Lost Woods is not meant to be a deep strategic game and it isn’t, and that is a good thing. I love the lighthearted nature of the game with the fun references to other works—like Narnia. It plays smoothly and is easy for younger players to play—I even had my 3 year-old playing with us. The artwork—as mentioned above—is wonderful and works well with the overall theme and game play.

The Bad:
I don’t have any negative comments to make about Lost Woods. Players may want more content, but I am sure that expansions can cure that.

Overall:
Lost Woods is a great game for family game groups or those looking for a light dungeon crawler. I haven’t had the opportunity to play the variants yet, but am looking forward to it as they will add more game play. This one is going on the shelf and will see a lot of table time. I am giving Lost Woods 4 out of 5 super meeples!

ENTER TO WIN A COPY OF LOST WOODS HERE!