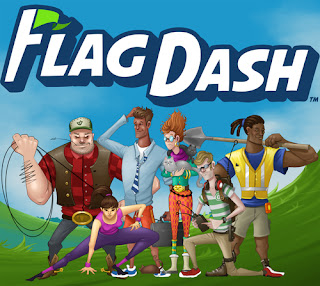 Do you remember the last time you played Capture the Flag? I am sure if you are like me it was many moons ago. Well in Flag Dash you take on the role of an adult that reunites with some old friends to bring back those fun and exhilarating times.

Flag Dash is a action/movement programming game where players try to out whit their opponents to capture the opposing team’s flag bringing it back home or collecting a complete set of flags from the opposing characters. The first player to do one of these two tasks wins!!!

To set up a two player game place the board in the center of the table on the “basic” side then add the two wall tokens, four tunnel tokens and the team flags as noted in the rules. Place the boost tokens and tiebreak marker off to one side. 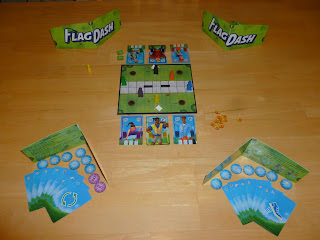 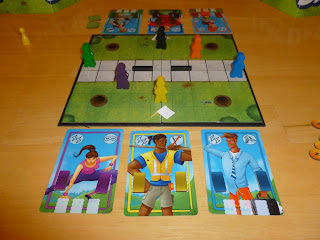 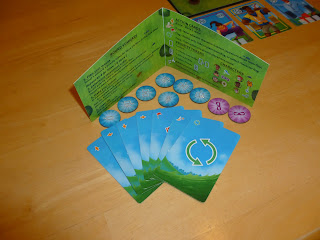 Flag Dash is broken into several rounds with each round consisting of four phases: 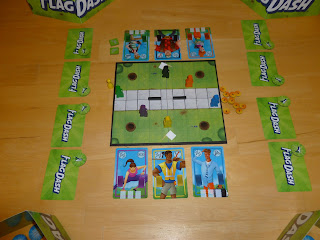 Action cards consist of moving forward, left, right and backwards along with copy movement, push and take a flag. 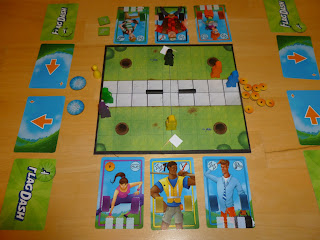 At the beginning of this phase all players turn over the priority tokens that were placed on top of their first move action card. As mentioned above the player with the lowest priority goes first. Priority tokens also allow players to take actions multiple times, play an additional action card, get a boost token, or retrieve all previously played priority tokens.

Make Moves:
Players then turn over their first move action cards and carry it out in priority turn order. Players can choose to apply the action to their “runner” or “defender”. Players may also choose to play a previously acquired boost allowing them to move one extra space per boost.

Once move one has been resolve players go to move two and repeat the “determine order” and “make moves” phases.

Clean Up:
Once all actions cards have been played players return all cards back to their hand, place all played priority tokens next to the board to show that they have been used, and give the tiebreak token to the player who went last in the previous move phase. Please note that if a player placed the number seven priority token down during this round, they may take all their priority tokens back.

This process continues until a player carries the opposing team’s flag back home or by collecting a complete set of flags from the opposing characters. The team to do this wins!!! 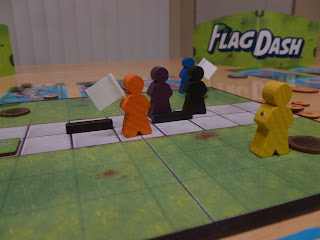 Theme:
Flag Dash has a very refreshing theme which you don’t see much of or any at all for that matter—adults playing capture the flag. My personal preference would have been to have the characters be kids but adult characters make for a fun twist. The mechanics go hand-in-hand with the theme giving you the real feeling of playing capture the flag.

Mechanics:
Blind or hidden movement programming is one of my favorite mechanics, I love the mayhem that is can cause. This game reminds me a lot of RoboRally in that aspect. I also enjoy the way you use the priority tokens throughout the game to jockey for turn order but to also gain additional advantages. There doesn’t seem to be any fiddly mechanics so everything flows really well. 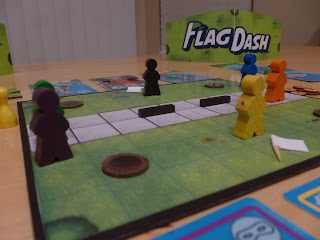 I must preface this part of the review by saying that I have a review copy, not the final game.

The artwork and components are not final, however that being said I think both are good. My one gripe here—which may be address for final production—is the team flags and how they are incorporated into the meeples. I like the idea of the character tokens carry the flag, I just don’t think the execution is polished. I would almost rather see a flag token that is placed on the character card of the person carrying it although this would make it harder to track who has the flag.

The Good:
Flag Dash has a lot going for it. From the secret movement programming to the choices involved with actions cards and priority tokens this game has a surprising amount of depth. It is very tactical but also carries a good amount of strategic choices. Flag Dash is easy to teach and works well for younger audiences too.

The Bad:
My biggest complaint about Flag Dash is the set up. It is tedious and takes some time, so be ready for it.

Other Thoughts:
I had the opportunity to play this with my two boys—six and eight—and while the eight year-old was able to catch on and play well my six year-old struggled. That being said I think the age range for the game is very appropriate. The time estimate is also very accurate. Our first game dragged a little while we tried to learn the rules but all the games after were at the short end of the time estimate if not less. We played with two and three players both of which worked well, however I prefer the two player version.

Final Thoughts:
Flag Dash is a wonderful game with solid choices. There are multiple variants and a different board configuration on the other side of the basic board to add to the replay value. I will be interested to see if they add in a few new characters and special abilities throughout the Kickstarter Campaign to spice it up even more. If I owned this game it would certainly be a keeper and would see some good playing time. 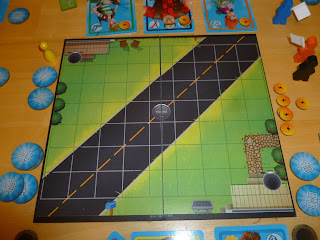 I am giving Flag Dash 4 out of 5 super meeples.

Please check out PieceKeeper Games’s Kickstarter campaign for Flag Dash which launches March 1, 2016. In the meantime check out their website for all the latest updates – http://goo.gl/VHGK7k