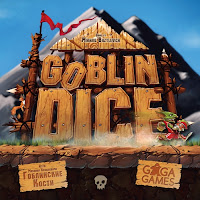 “Put yourself in the goblin runner’s shoes and take part in a fun and exciting race. Only good reaction and agile mind will help you survive this dangerous race, because a huge Magic Stone is rushing at your heels and will flatten anyone who gets in its way! Roll the dice to earn bonus points and become the fastest on the race track!

Goblin Dice consists of a random number of rounds and continues until one of the players reaches the finish line—he is considered the winner—or the stone flattens everyone except one player, with this final survivor being the winner.

Every round each player rolls two dice and uses any two of them to move or to activate the tile’s special feature. Once all of the players have used their dice, the stone behind them moves and tries to smash the last runners. Players do not only move their goblins forward, but they can also activate special features of the tiles, complicating the game for their opponents.”

To set up Goblin Dice place the starting tile on the right side of the table and the finish tile on the left side. Then select seven random field tiles to place between the start and finish tiles lining up the terrain as they go.

You are now ready to race!

The game is broken into rounds with each round having four phases as follows: 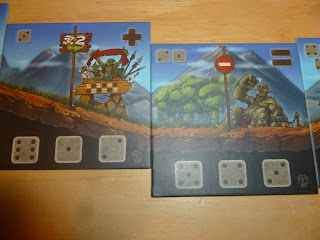 Once phase four is over players grab their dice and get ready for phase one again. The game ends when one player has reached the finish line or all but one player has been run over by the boulder.

Theme:
Although you could put just about any theme on this game I really love the fantasy touch here. You can really imagine these not-so-smart goblins creating this annual race where they must flee from a rolling boulder while trying to sabotage one another along the way. So the theme definitely fits here and flows well throughout the game.

Mechanics:
Although this is a type of roll and move game it doesn’t feel like like a roll and move game. I like the speed element—quickly grabbing the dice—as it adds a nice chaos element. And the choice of how to use the dice makes it feel like a worker placement game. All-in-all it is a nice mix of mechanics.

As with Urbis the component materials are top notch. The tiles and tokens are nice and sturdy while the dice are also made well. But the real star of the show here is the artwork! What a great marriage between the light hearted illustrations and the simple whimsical game play. Konstantin Porubov did a fantastic job.

The Good:
The artwork makes this game shine although the game play doesn’t hold it back at all. Like I mentioned above I love the dice chucking, quick grabbing, decisions the game has to offer. It all just works really well together.

The Bad:
There really isn’t anything bad to be said here. The game is solid and plays well with two, three, all the way up to six players. The age recommendation is spot on and if you are going to play with younger kids you can make a house rule eliminating the quick grab aspect. You can do something like an alternate grab or players rolling and playing their own dice.

Overall:
Overall I really like this game and it is definitely one that will hit the table a lot. I give this game four out of five super meeples.