Congratulations Daniel Ilnyckyj winner of the Wreck and Ruin Giveaway! A huge thank you to Dream Big Games for bringing us this awesome giveaway!

Unfortunately Wreck and Ruin will not be funding, however look for it to return to Kickstarter in March 2018. You can follow the updates on Facebook. 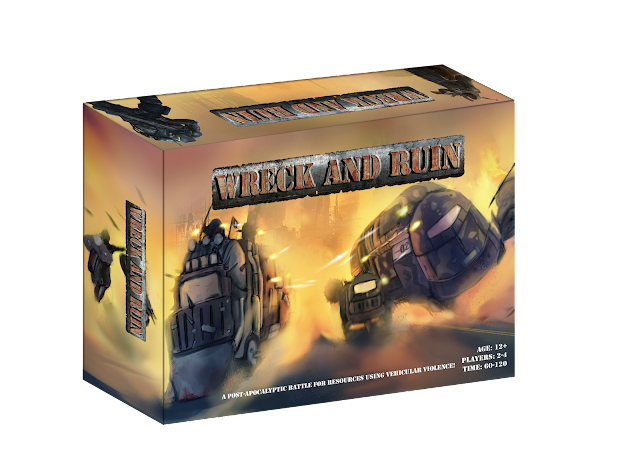 About Wreck and Ruin:
Wreck and Ruin is a vehicle miniature board game, set in the not-too distant future of a post-apocalyptic world. 2-4 players can choose between 4 factions and make up their convoy from the 4 classes of vehicles available. scouts are fast and can shoot on the move but are weak, buggies can repair other vehicles. wreckers are powerful vehicles designed to crush their opponents. big rigs are slow but have strong attacks and can soak up damage and still keep going too!

The game is played on a series of tiles which allows for different challenges each time you play. Fight for control over salvage sites placed on the map, counting as victory points but also provide salvage cards

Each player has action points that they use to move, repair, shoot, or ram their opponents. tactical positioning affects how many dice you roll, improving your chances of success.

Salvage cards can be bought or found, special equipment which can help you in your moment of need. as well as your enemies the world is equally dangerous, event cards affect the entire board and can hinder your plans, and on the rare occasion also help you! 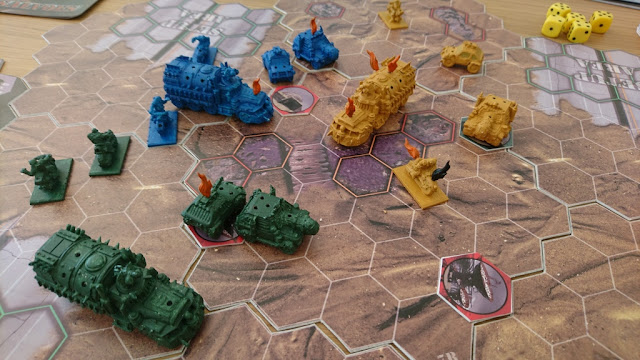 Find out more about Wreck and Ruin on EverythingBoardGames.com, Kickstarter.com and BoardGameGeek.com.

Thank you Dream Big Games for bringing this awesome giveaway to EverythingBoardGames!

This contest is for one signed copy of Wreck and Ruin, ends October 18, 2017 at 11:59 PM MST and is open worldwide. Void where prohibited or restricted by law. You may not win this contest if you have won a giveaway through EverythingBoardGames.com in the last 30 days. No Purchase Necessary.

Winner(s) will be selected October 19, 2017 via a random drawing from among all eligible entries and will be announced on this page and contacted by email. The winner(s) must contact EverythingBoardGames.com within 48 hours of notification. Any winner notification not responded to or returned as undeliverable will result in forfeiture at which point a new winner will be selected. The prize(s) will be fulfilled by Dream Big Games.