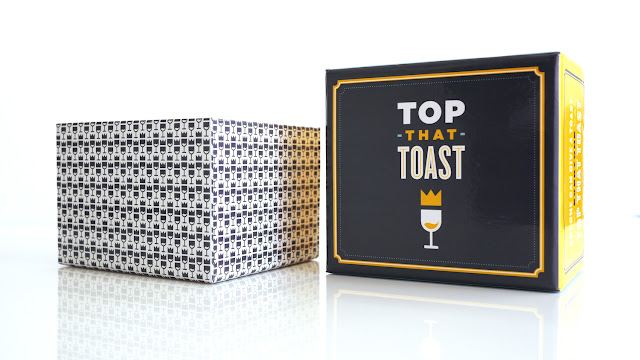 Congratulations Charles Irvin and Rachel M winners of our Top That Toast Giveaway!


This contest has Ended.

Get your copy of Top That Toast on Amazon! 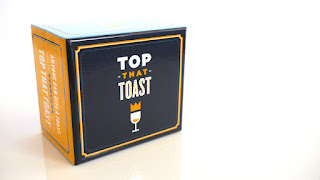 About Top That Toast: 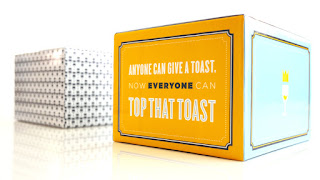 Designer:
Artist: Random Embassy
Publisher: Self Published
No. of Players: 3 – 20
Ages: 18 and up
Playing Time: 30 minutes


From BGG:
“The party game Top That Toast consists of two decks of cards: 50 Tone Cards and 200 Topic Cards. All players begin the game by drawing 5 Topic Cards. The oldest player in the group begins as the “Facilitoaster.”

The Facilitoaster begins the round by drawing a Tone Card, which determines the tone or style of the toast (some examples include “Humor,” “Sincere,” “Tearjerker,” and “Roast”). All other players respond by submitting a Topic Card, face-down on the table. The Facilitoaster then reads the Topic Cards aloud and chooses the Topic Card that, in his or her opinion, best matches the Tone Card and deserves to be toasted. The player who submitted that Topic Card then delivers a toast and thereby wins a Tone Card for that round.

When the Top That Toast Tone Card is drawn, each player will give a toast based on the Topic Card that is selected by the Facilitoaster. Once all toasts are completed, the Facilitoaster chooses which player is awarded the Tone Card.

After each round, the role of the Facilitoaster rotates around the table. Once a player has won a pre-determined number of Tone Cards, that player wins the game!” 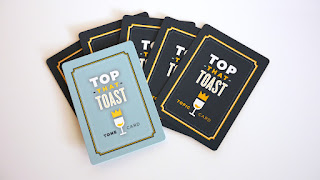 HOW TO PLAY:
Each player draws five Topic Cards, and the oldest player in the group begins as the Facilitoaster.

The Facilitoaster draws a Tone Card which determines the style and tone of the toast that is to be given.

From the Topic Cards in hand, the other players select the card they think is the best match for the Tone Card drawn by the Facilitoaster. When the Facilitoaster picks a particular Topic Card, that player wins the round and the chance to deliver the toast!

After the round, the discarded Topic Cards are placed at the bottom of the deck. Everyone draws a new Topic Card, and the next player becomes the Facilitoaster.

Check out the Official game Rules Sheet for more info and details on Special Tone cards. 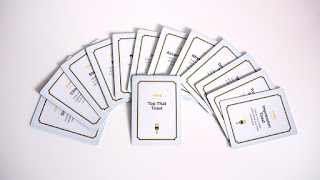 The fine print:
This contest ends January 28, 2016 at 12 AM MST. This promotion is in no way sponsored, endorsed or administered by, or associated with, Facebook or Twitter. We hereby release Facebook and Twitter of any liability. Open to US residence only. You may not win this contest if you have won a previous contest in the last 30 days. EverythingBoardGames.com and DCal Games is not responsible for fulfilling the rewards. This is the responsibility of the game publisher involved with the contest. Contestants release EverythingBoardGames.com and DCal Games of any liability. Winner(s) will be announced on this page and contacted by email by January 29, 2016.