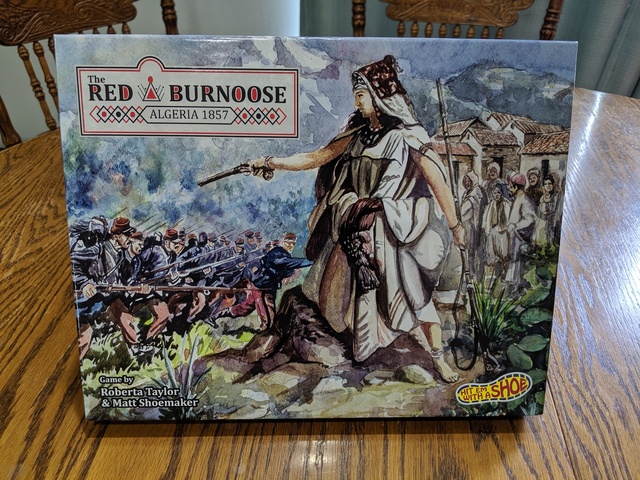 
Join Fadhma N’Soumer in her fight against the invading French armies in the Kabylie region of Algeria in 1857. You will join forces with up to 3 other players in this co-op board game to use deck building and area control elements to survive as the French advance on your villages.

The French are run as an automa deck for 1 to 4 players to defeat. Victory is achieved by outlasting the automa. Players control pieces on the board that they can strategically move between villages to help stop the French advance. Players use the cards in their hand and those they buy from the shared market to acquire new pieces for the board and to manipulate the board state.

Disclaimer: The publisher provided the prototype copy of The Red Burnoose: Algeria 1857. The opinions expressed in the review are completely my own. 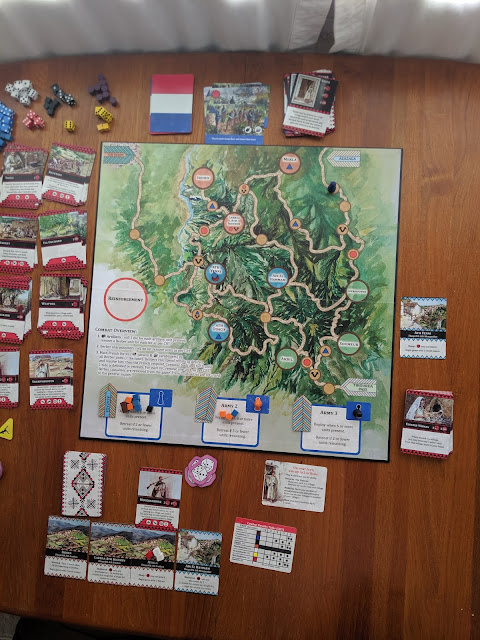 This game was a challenge to learn due to the amount of components involved, but I love the context. I hadn’t heard of the French invading Algeria and it was interesting and refreshing to learn about Lalla Fatma N’Soumer, a woman leader leading the resistance against the French. Girls especially need more real life women warriors to look up to, not just fictional characters like the Marvel or DC superheroes, so I love that this game has that educational and inspiring component.

I also enjoy co-ops, deckbuilding games, and dice games, and this hit the trifecta!

Setting up this game is fairly quick and easy, however, some of the wording was a bit confusing during setup such as “Take out 2 sharpshooters per player and 5 moudjahidine per player. To me, this sounds like these cards are now out of the game. I think a more direct approach would be helpful such as “place 2 sharpshooters and 5 moudjahidine per player into the recruitable cards section and remove the rest of these cards from the game.” The moudjahidine and moudjahidate are also confusing upon learning this game with them being very similar sounding. Perhaps keep the moudjahidine as the recruitable cards and instead call the moudjahidate “female warriors” or the fff (female freedom fighters)…assuming moudjahidate is the feminine form of moudjahidine.

The turn order phase is simple enough, the player takes any combination of up to 4 total actions on their turn:

1. Play a card (the cards themselves are self explanatory)

2. Reserve (place a card into any of your villages or retrieve them all)

3. Ambush (discard specific cards in order to ambush the French units on a path leading to your village)

4. Mobilize (moving any number of Moudjahidine and Sharpshooters from one of your villages to another)

Then with any cards not played in your hand, you can use the purchase power to buy a new card in the recruitable section in order to grow your deck.

Each additional player takes their turn, ending a round with the French automa’s turn.

One of the actions that can be taken is “mobilize”, this is the same action that is stated on the “young man” and “man” cards except that mobilizing allows any number of the moudjahidine and sharpshooters to be moved vs. the cards allowing only one or the other… It’d be nice if when playing cards to see more unique actions that can take effect rather than the card actions overlapping with the mobilize action that can be chosen during a players turn phase.

The most challenging aspect of this game would be learning all the symbols, and their colored unit blocks. I personally would like to see in the combat results table (CRT card) a mini symbol next to each matching unit color so that it’s quicker and easier to associate the unit with their symbol when reading automa and village cards.

Also, if there’s a way to condense the symbols, or label them more efficiently, such as engraving the little unit blocks with their symbols on their associated colors, or having these units shaped as their symbol, (ie. brown colored mini horse figures for the cavalry- like the play pieces one would use in monopoly but smaller), I feel that simple change could enhance the game by being more appealing, engaging to play, and overall would help in simplifying gameplay.

Additionally I kept mixing up the purchase power with the cost of the card, I’m not quite sure how that can be remedied, it may just take time to get use to. I also wonder why the “youth” card and the “elderly man” both have a 0 influence in their purchase power, if these cards aren’t meant to have any influence, it’d make sense to omit that from these cards entirely.

The “add to map” symbol should be placed somewhere other than the cost location of the card. An upper corner or at the end of the text but still above the cost section of the card would be less confusing upon learning the game as well. I realize this is a prototype, and that things may still be subject to change. 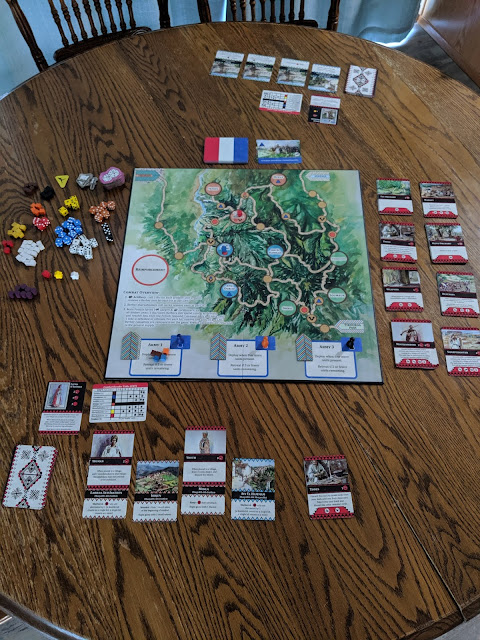 I love the art and design of the cards and of the game board, being that it’s called “The Red Burnoose” (burnoose meaning cloak), and with the history included in the game mentioning that Fatma “was also known for wearing a red burnoose,” I do find it curious that the cover image on the box shows a woman in a white cloak. This has no impact on the game itself though, and overall once getting past the learning curve in understanding how to play, it is a very enjoyable game. I am excited to teach this game to my sons when they’re old enough and can understand the history behind this game. I look forward to the final version.

Check out The Red Burnoose: Algeria 1857 and Hit ‘Em With a Shoe on: