Congratulations Justin Hollender, Michael Wright, and Dan D’Agostino winners of the Fox in the Forest Giveaway! A huge thank you to Renegade Game Studios for sponsoring this giveaway.

If you were not one of the lucky winners and would like to get your hands on The Fox in the Forest, it will be released July 19, 2017 and you can pick it up at your FLGS or online. 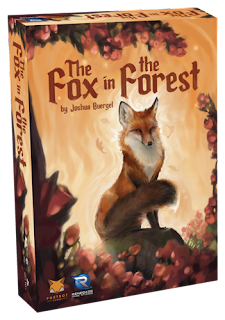 About Fox in the Forest:
The Fox in the Forest is a trick-taking game for two players. Aside from the normal ranked- and suited-cards used to win tricks, fairy characters such as the Fox and the Witch have special abilities that let you change the trump suit, lead even after you lose a trick, and more.

You score points by winning more tricks than your opponent, but don’t get greedy! Win too many tricks, and you will fall like the villain in so many fairy tales…

Find out more about Fox in the Forest on RenegadeGameStudios.com and BoardGameGeek.com.

The Fox in the Forest Giveaway


This contest ends July 13, 2017 at 11:59 PM MST and is open to legal residents of North America who are 18 years or older. Void where prohibited or restricted by law. You may not win this contest if you have won a giveaway through EverythingBoardGames.com in the last 30 days.


Winner(s) will be selected July 14, 2017 via a random drawing from among all eligible entries and will be announced on this page and contacted by email. The winner(s) must contact EverythingBoardGames.com within 48 hours of notification. Any winner notification not responded to or returned as undeliverable will result in forfeiture at which point a new winner will be selected.