WARNING: This is a preview of Coma Ward. I was sent a prototype version of the game. All
components and rules are prototype and subject to change. In this preview I will talk about the general game, and not talk about specifics, as I don’t want to spoil the fun for you. 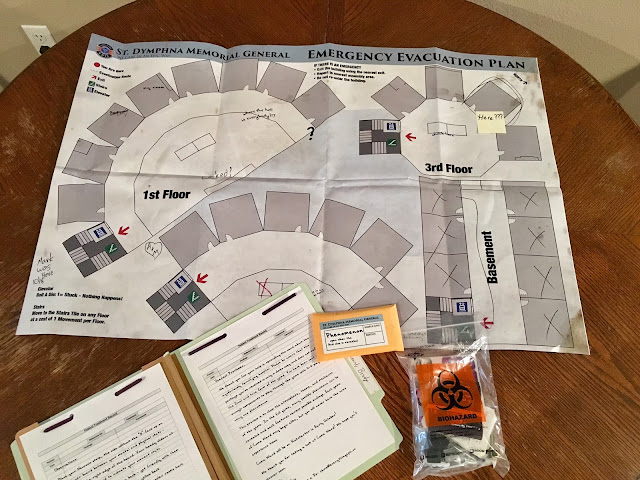 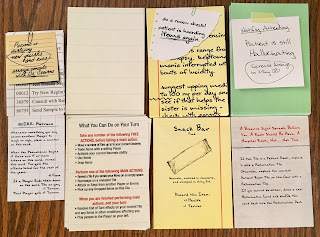 Rules and Setup:
Due to the style of game, and the fact that there can be many different scenarios that can be played during any single game, the rules have a basic structure that you follow.  When there are some events that happen that only happen a couple times during play, you will probably need to open the rule book and read exactly what will happen and how.  When playing and you realize that you have a question about something, it’s pretty easy to find the section in the rule book where it will explain game play for that area.  The only exception to that would be during the Phenomenon.  It’s hard to know what to do with the cards that come in the Phenomenon packet.  After playing the game once or twice, it seems like it would be easier to understand, but when playing at first, it is a little confusing what each kind of cards are used for and due to the nature of the game, you tend to not want to read any of them, as it might spoil the game.

Setup is done pretty easy, as you setup the board and place your person on the lobby of the 2nd floor. You get all the components of your color, and place your tracker on 5 health, and 3 focus.  Your other stats will move when you go up or down on your health and focus/terror.  You start with a quirk card which adds some interaction to the game that really isn’t related to the game itself, but helps with the theme as many of the quirks make you act and do things that maybe you wouldn’t normally do during play. 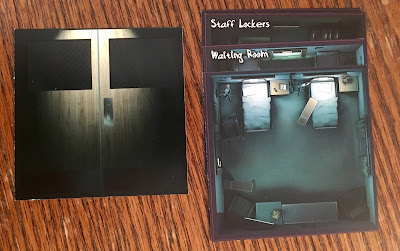 Theme and Mechanics:
You wake up and are in the coma ward with other random people. You don’t have a personality or know anything about yourself other than some neurosis that can cause your player stats to move or give you some extra abilities from other players.  You might feel anxious, nervous, delusional, egotistical, or many other feelings that add to the theme of the game.  You start exploring this hospital which you learn as being the coma ward.  As you enter rooms you might stay focused and find an item which might be a weapon, clothing, or even a clue to why you are there (if you pass the focus check).  Or if you don’t pass the focus check, you have a hallucination which could be real or a part of your imagination.  During the hallucination you might have options to choose what you do during the hallucination.  The outcome might be a reward, or it might lower your stats.  You are able to do any free actions such as move, trade items with other players, activate a neurosis ability, use an item, or drop an item, before you decide on a main action.  Main actions include revealing a tile in a room, rummaging on a revealed tile, attacking or stealing from another play or enemy, or picking up any dropped items on a tile.  Most of the main actions tend to be flipping over tiles when you walk into a room.  But depending on your neurosis and strategy, you might stay close to another player.  After finding 3 clues, you will open the phenomenon packet and play will change.  Each played gets a goal that they will accomplish.  That may seem easy, but you will also start having nightmares, you will do focus checks and the outcome will cause you to draw different numbers of nightmare cards before taking your normal turn.  Everyone playing all of a sudden starts doing crazy stuff, as everyone’s goal is different.  Once a player accomplishes their goal, they win the game and reads the epilogue card to find out how the game ends. 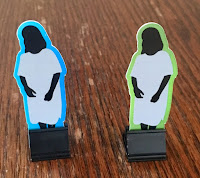 Artwork and Components:
The artwork compliments the theme. This was a demo copy with only one phenomena, so my comments here might not matter if you are thinking of backing the game on Kickstarter, or owning the game after Kickstarter.  I liked the layer tokens as they all look the same minus the color, which goes along with the theme.  They have no personality, no information about who or what they are minus the present neurosis.  I’m not going to go into the components too much as they are more then likely going to be upgraded for the final version.  The artwork is dark as per the theme, but you can’t really see the rooms much due to the dark colors.  I would have liked to see different art for each room and include some flavor text on each room, even if it didn’t change any game play.  It seemed like a bummer each time you flipped over and room and it just looked liked a dark room with nothing else on it. I have heard that these things will be changed in the final copy, and Everything Epic simply didn’t want to give away all their surprises in a prototype version.  My game came in a patient file, like you would see at a hospital.  This idea was very different from any other board game I have played.  But it really added to the theme of the game and made the game seem fun. 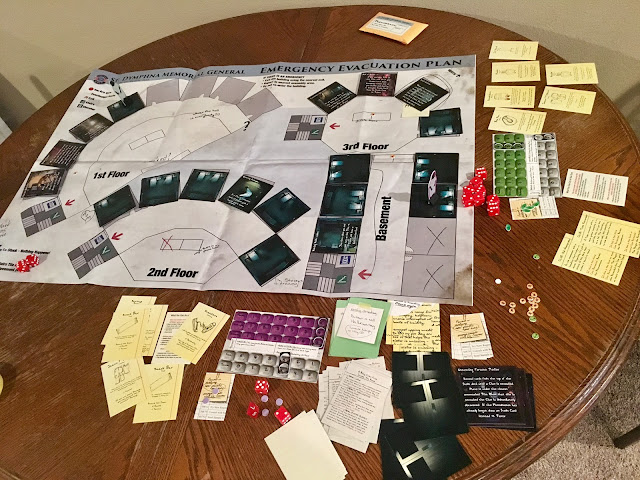 The Good:
The dice mechanic of rolling a 4 is amazing. When you roll a 4, you get to re-roll that die plus another one.  So essentially, you can pass through anything even if you have 1 die, though it’s not probable.  The theme really came strong and you truly felt like it was about the coma ward.  We enjoyed the hallucination cards, as many times you were able to choose between different options which gave different results.  We enjoyed how everyone had their own goal during the phenomena and no one even knew what everyone else was doing or why.  This made things very fun and interesting as you needed to decide if you would continue to fulfill your goal or maybe try to mess with someone else.  There is a chance to stop a player from winning because they will need to show their goal card at some point when they are close to wining.  This lets others players stop that player from winning and have some other possible results.

The Bad:
Just like Betrayal, some of the rules are hard to follow due to the possibility of different scenarios happening.  The nightmare explanation card got shuffled into the nightmare deck due to having the same looking back.  It was always a bummer when revealing a “normal” room with no text on it.  The layout map seems dull and seems like your options are to go into another random room on the same floor or a random room on another floor.  Overall,  the location of the tiles and wha floor your on doesn’t really matter until the phenomena.  It seems like you are just wasting time looking for clues and getting enough tiles on the board until the phenomena occurs and real strategy and play occurs.  Note, Everything Epic has explained to me that many of these bad things will be changed in their final version, but I still feel like I need to explain these aspects from what I received  from their prototype version.

Thing to Know:
There are some curse words within the game. Some of the card text are similar, but when you decide what action to take, they can be different from previous cards with similar text. This can help with re-playability, as you can’t memorize the best action to take if you’ve played the game already.  This review was based on a prototype copy with only 1 phenomena.  I would assume other phenomena in the game play very different and can be enjoyed as much as this one was for us. 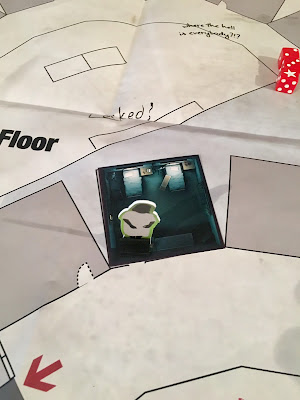 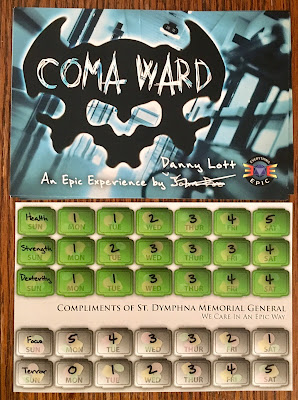 Final Thoughts:
I can’t help but compare this game to Betrayal.  I think Coma Ward does better with the theme. The board where you keep track of stats is way easier to keep track of and actually works.  Coma Ward does better with it’s play during the phenomena.  I loved that during the phenomena I played, everyone had their separate goal that they were trying to achieve. (note, there are different phenomena where you might be co-op, 1 vs remaining, or competitive) Knowing these things, I think Coma Ward will become a very popular game.  I really want to play some other scenarios, as a lot of the fun is not knowing what will happen each time you play it.

Players Who Like:
If you like Betrayal: house on the hill, you will enjoy this game.  If you like tile laying games with an RPG aspect to it, I would recommend this game to you.

After talking with Everything Epic about my review experience, I am excited about where the game is going. I don’t want to go into specifics as I don’t want to spoil your experience with the game. The game will be developed more with more text on tiles, with better components, and small changes that will make game play more enjoyable. 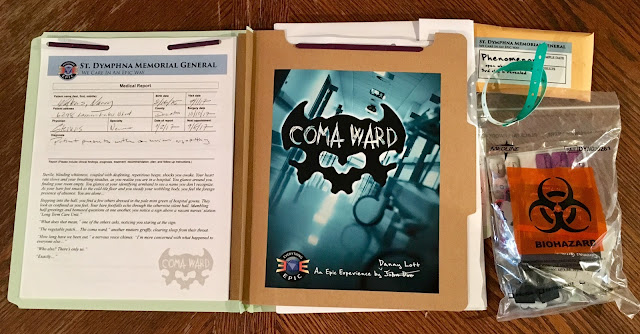 Check out Coma Ward on: 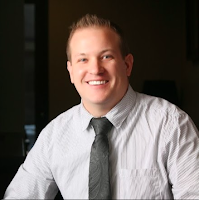 Brody Sheard played board games with his large family growing up.   He continues his love of games by teaching his family, local gaming guild, and friends about new and exciting games.  Brody believes that board gaming keeps your mind healthy while also having fun interacting with others.