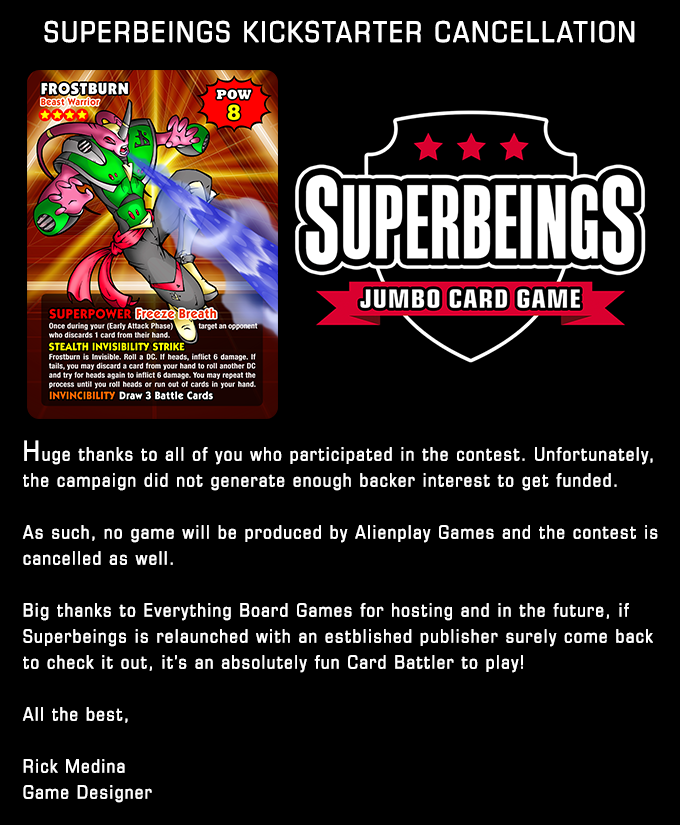 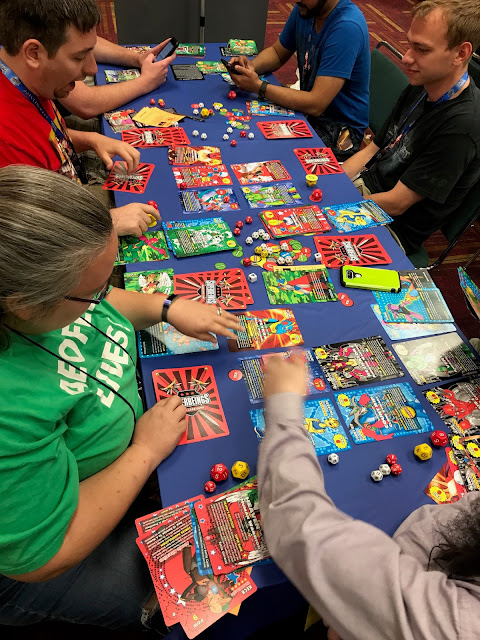 About Superbeings Jumbo Card Game:
In the Battle Universe, the Alliance Wars between Nlife (natural life made up of Humans and Aliens) and Alife (artificial life made up of Androids, Beasts and Clones) continues to rage on. Furthermore, Xlife (spiritual divine creatures known as Xpets) have been summoned by the HA Masterbeings to intervene as Alife led by Andromeda will not stop until they control all worlds of Nlife. Superbeings from all corners of the universe have taken their sides; it’s the rise of the Superbeings Battle Universe!

Superbeings is a relaunch of the anime-styled Humaliens Trading Card Game released in 2003 by AEG with a new design and story-line by creator Rick Medina. Superbeings features a 6-Super Team concept of playing with multiple front-line attackers and multiple back-line reinforcements with the objective to win by one of three ways: (1) knocking out your opponent’s entire front-line, (2) knocking out a total of 5 Supers, or (3) knocking out 15 rank points worth of Supers. The game uses a variety of D6, D12 and D20 dice-rolling mechanisms for establishing turn actions, attacks, and more.

The traditional two-player heads-up game is the easiest to start with and is the preferred play style — but when the opportunity for a massive four-player game is called upon, there’s an entirely different feel to the game!

Find out more about Superbeings Jumbo Card Game on KICKSTARTER, SuperbeingsGame.com and BoardGameGeek.com. Also see our review at EverythingBoardGames.com.

Cancelled!
Thank you Alienplay Games for bringing this awesome giveaway to Everything Board Games! 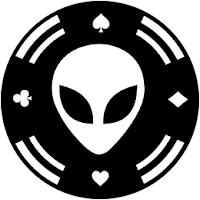 This contest is for 2 Deluxe Foil Sets of Superbeings Jumbo Card Game, ends September 13, 2017 at 11:59 PM MST and is open to legal residents of the US, Canada, and Europe. Void where prohibited or restricted by law. You may not win this contest if you have won a giveaway through EverythingBoardGames.com in the last 30 days. No Purchase Necessary.

Winner(s) will be selected September 14, 2017 via a random drawing from among all eligible entries and will be announced on this page and contacted by email. The winner(s) must contact EverythingBoardGames.com within 48 hours of notification. Any winner notification not responded to or returned as undeliverable will result in forfeiture at which point a new winner will be selected. The prize(s) will be fulfilled by Alienplay Games.