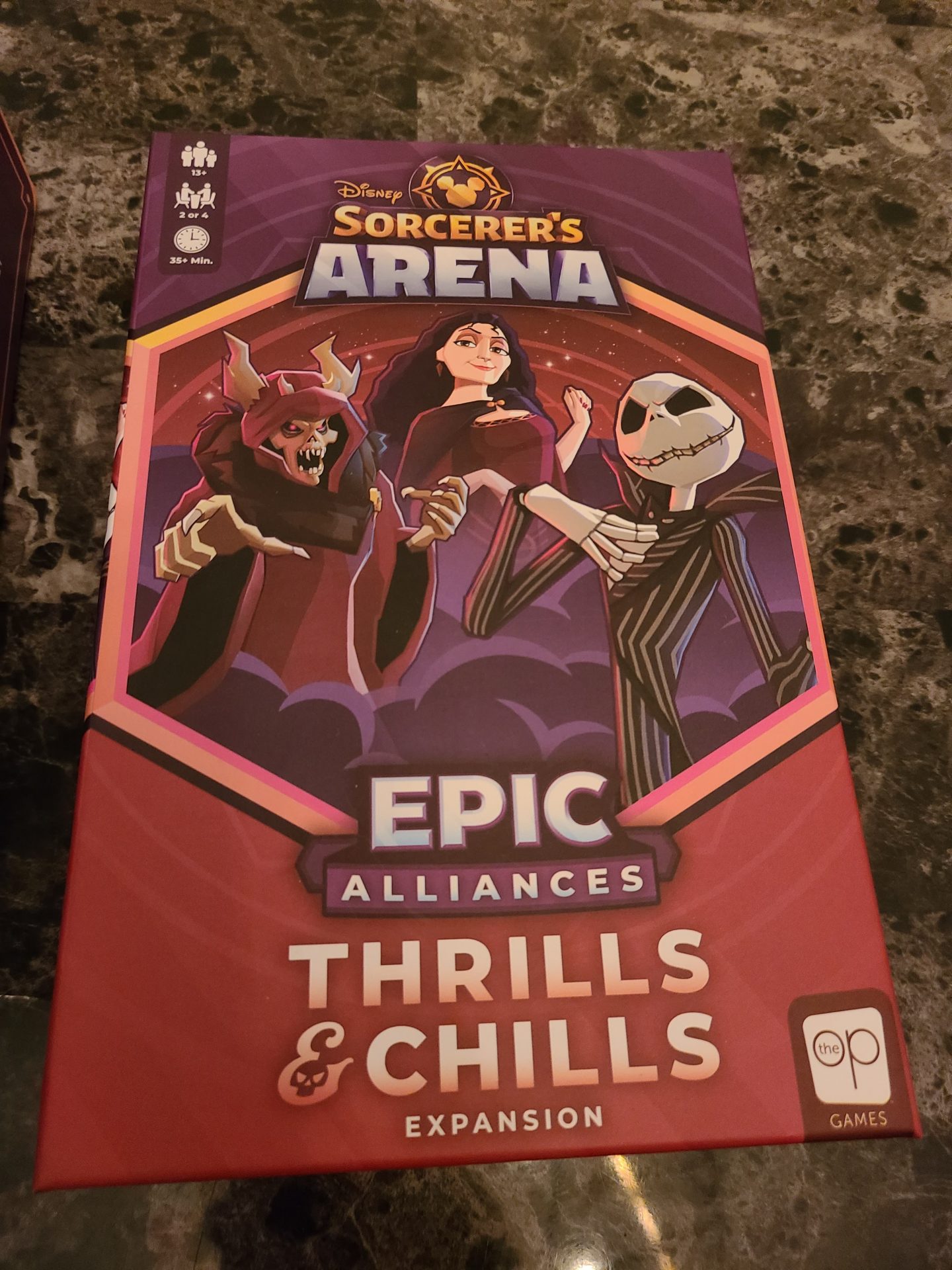 I got sent this beautifully made (and themed) core set and expansion by The OP. I was tasked to give a review on the expansion itself but as I put in some serious time playing out all the (tutorial) chapters, trying multiple character combinations and then playing the expansion items, I wanted to pass along my thoughts on both. For the readers that skim, I liked it enough to play several days in a row and then went on to download the app that is very similar to the game and also well designed. In terms of a product that I’ve received for review purposes only, I think it’s safe to say I’ve put the most time into this title and that can be attributed to the quick set-up, gameplay, and replayability of the game.

About the Core Set: Become the next Master Summoner in this Disney-themed strategic battle arena game, where every choice you make determines your legacy! Recruit a fantastical battle-ready roster of Disney and Pixar heroes and villains, creating incredible combinations that provide endless replayability. Once you’ve summoned your characters to battle in the Sorcerer’s Arena, strategize their every move using their unique abilities to earn the most victory points. Learn as you go in this expandable tabletop game inspired by the popular mobile game, overpowering your foes to win the ultimate Disney and Pixar battle royale!
About the Expansion: Take your combat skills in Disney Sorcerer’s Arena: Epic Alliances to all new levels with the Thrills and Chills expansion pack! Jack Skellington, The Horned King, and Mother Gothel wield new attacks and abilities true to their twisted characters to bring fright and might to the Arena’s already epic battles. Disney Sorcerer’s Arena: Epic Alliances is the ultimate PvP tabletop game for Disney and Pixar fans and gamers where players can build teams out of Disney and Pixar heroes and villains and compete in an expandable, learn-as-you-go battle arena game.
Disclaimer: The publisher provided the copy of Disney Sorcerer’s Arena: Epic Alliances Core Set. The opinions expressed in the review are completely my own. 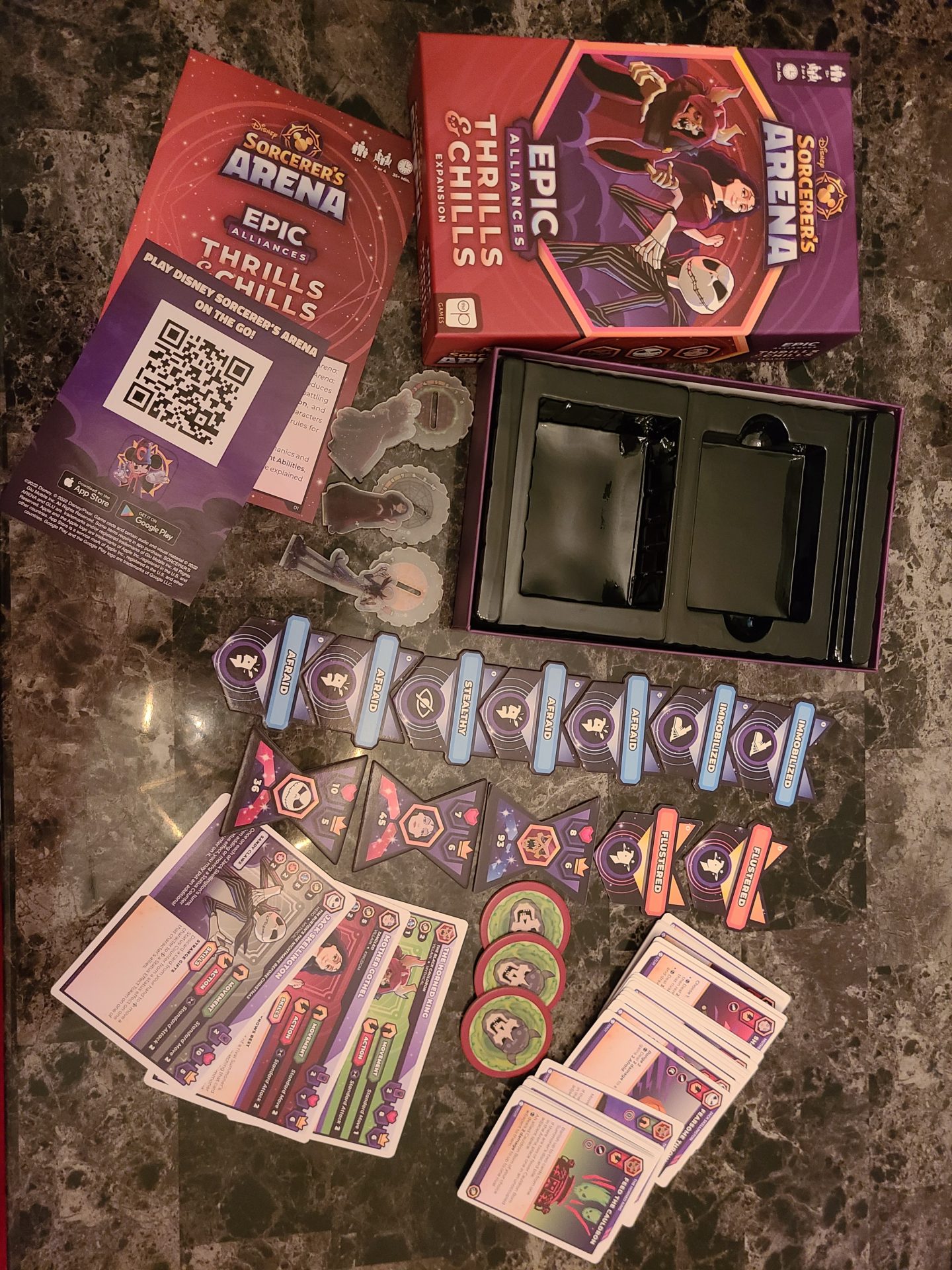 It’s almost unfair the initial feeling this game gave me, but as a long time Disney fan I was beyond excited to dig in and at the same time, very worried on how it would actually play out. Considering the size of the publisher, it wasn’t surprising the components were very well made – the crowning achievement in my opinion was the amazing standees with associated life-tracking rings.  From the box to its sturdy cardboard punch outs, they did a solid job on the production. The one complaint I had was that the character ability cards and character decks were thin and made of lower quality card stock than anything else. It seemed like an oversight to me, but nothing sleeving can’t fix. Without sleeves, I think these cards will not stand the test of time. 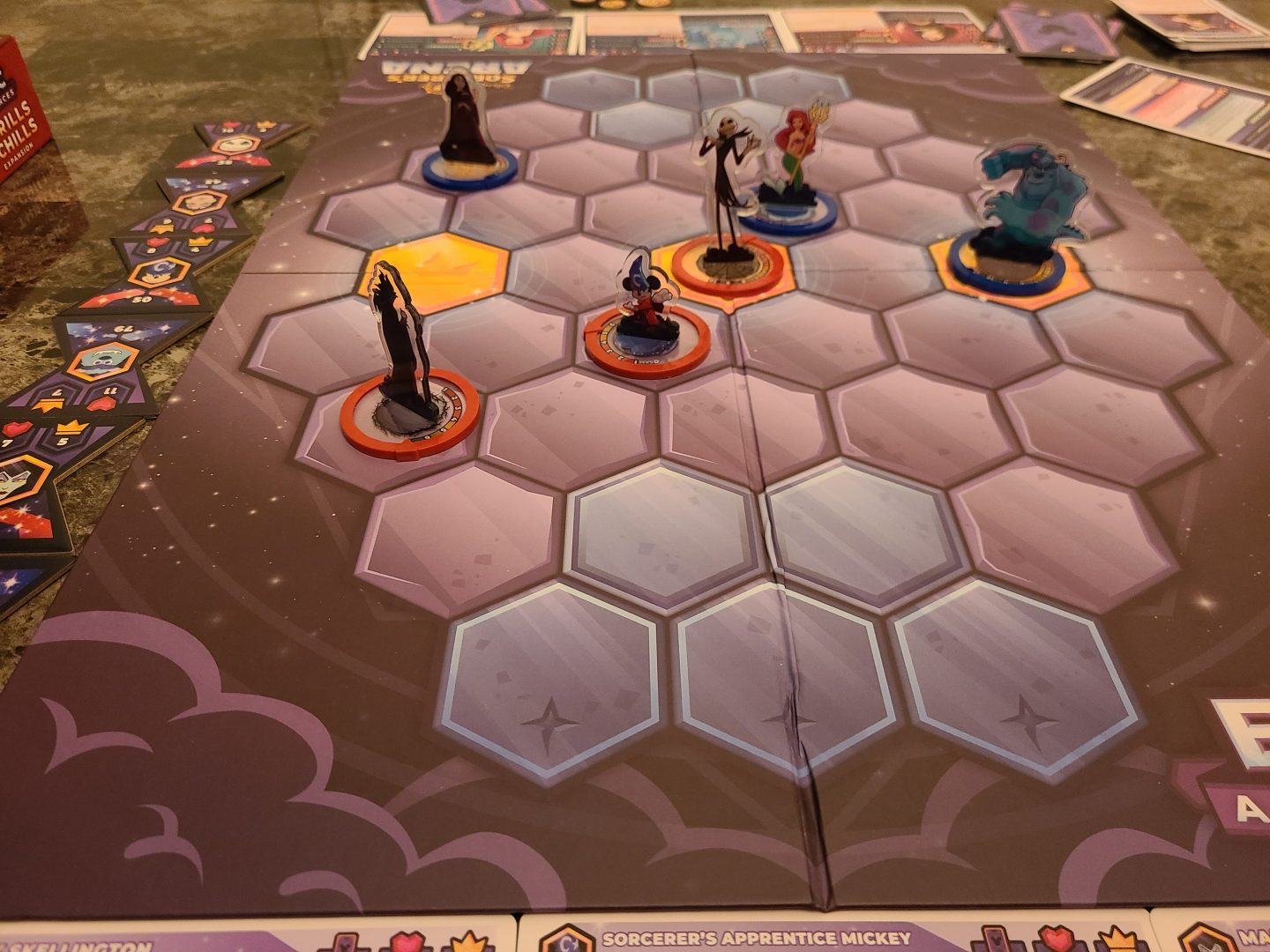 In General: The unique character abilities are up there as they allow a lot of strategy and agency in the game, but my favorite part is that you can take any of your turn phases (Movement, Action, and Skills) can be taken in any order. This is not the first time I’ve run into this type of gameplay but it suits the game perfectly. I think this part in particular is what made me keep bringing it to the table.

The Expansion: I loved how the character cards so closely matched their character, such as Mother Gothel and her card “Deft Manipulation”. Tangled is one of my favorite Disney movies, and they just did a great job in bringing them to life in the game. It should be mentioned that The Horned King seemed pretty powerful, but I’d need more trials to determine if it’s always or a lucky game.

In General: Loosely, the game could be described as a ‘King of the Hill’ style game in which there are three hills to capture. However, the weight of the game’s victory points lies in KO’ing an opponent’s characters. As an arena, that’s actually a good thing, but as it is very hard to hold those special locations earning a single VP for being able to survive a full round there, felt a bit disappointing.

The Expansion: I’ll be hung for saying so, but it’s true, I am not a fan of Jack Skellington, that movie, or anything to do with it. It may not be relevant to the review, but it’s just one of those things I had a hard time getting past. I did give him a test drive in the game, and he performed fine, but I won’t play him ever again, haha.

There are several mechanics at play here including but not limited to: Area Movement/Control, Card Play Conflict Resolution and Movement, Deck Construction (through character choice), Grid/Hex Movement, Hand Management, Variable Set-up, King of the Hill, and Unique player abilities. 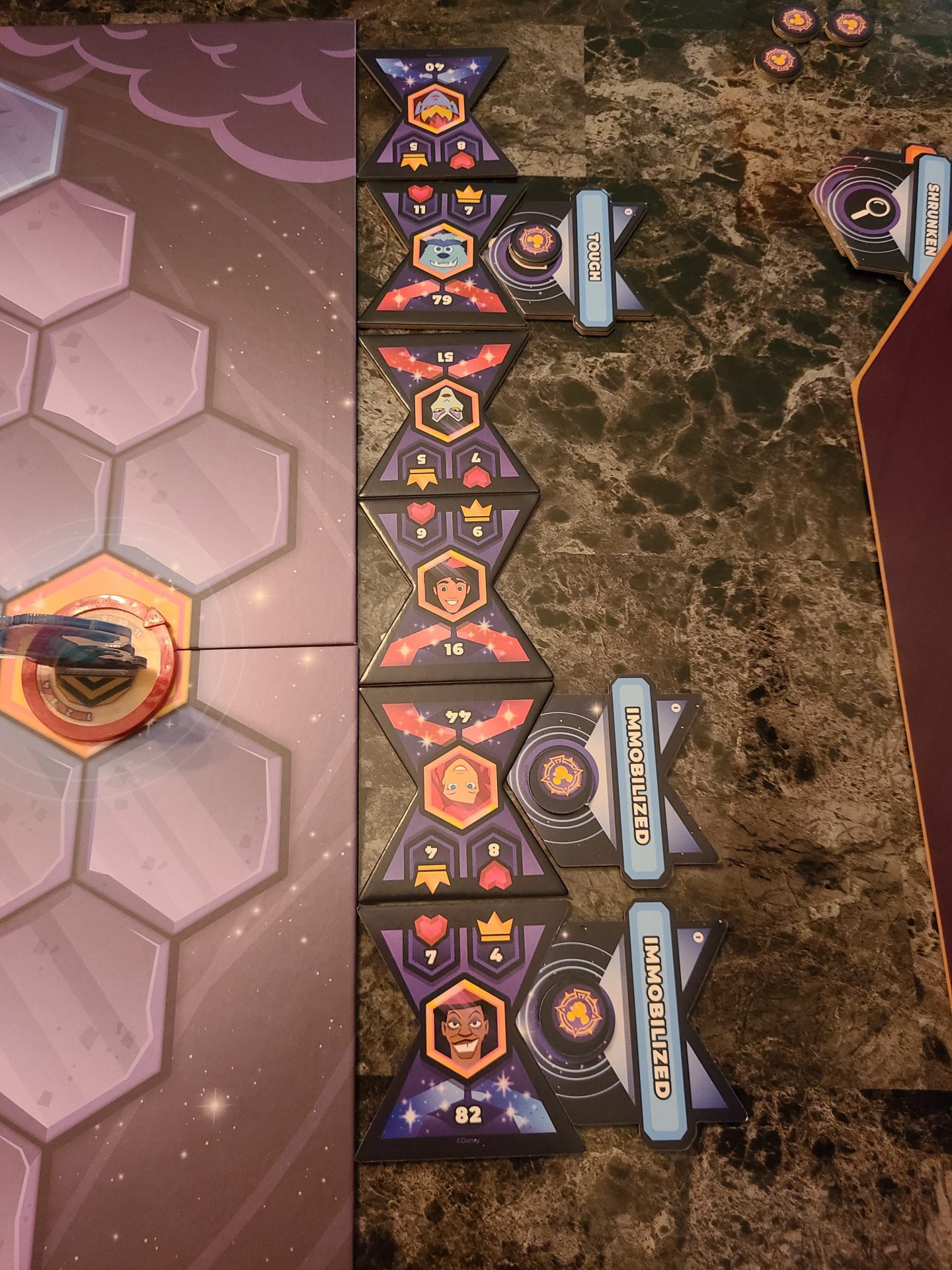 This medium weight game allows space for complex decisions and planning but unlike many similar weight games, the average turn is quick and pleasant. I enjoyed that the contest between players was usually very close which speaks of a good balancing structure. I must point out that the characters represent different classes and types. There are healthier, brute types, casters, utility, etc. Though the lines on these classifications are often blurred, once you get used to the game you’ll want to pay attention to this and choose your team according to your strategy. In line with that thought, pay attention to the gears in each character deck so that you have the ability to upgrade your characters. The feel and enjoyment of the game was akin to Summoner Wars, a title that I’ve played and enjoyed, but I’d rank this one just above that.

– Fantastic teaching through play tutorial they broke into “chapters” that introduced a few elements of the game at a time.

– Excellent print quality and graphics (with a favorable theme)

– Real control over your turns through manipulating the order in which you take your phases.

– Taking turns back and forth through character perspective not one player moving all of their units then the next.

– Using cards in hand that match your characters for empowered actions or taking the standard move and/or attack.

– Making the characters come to life through their cards and abilities 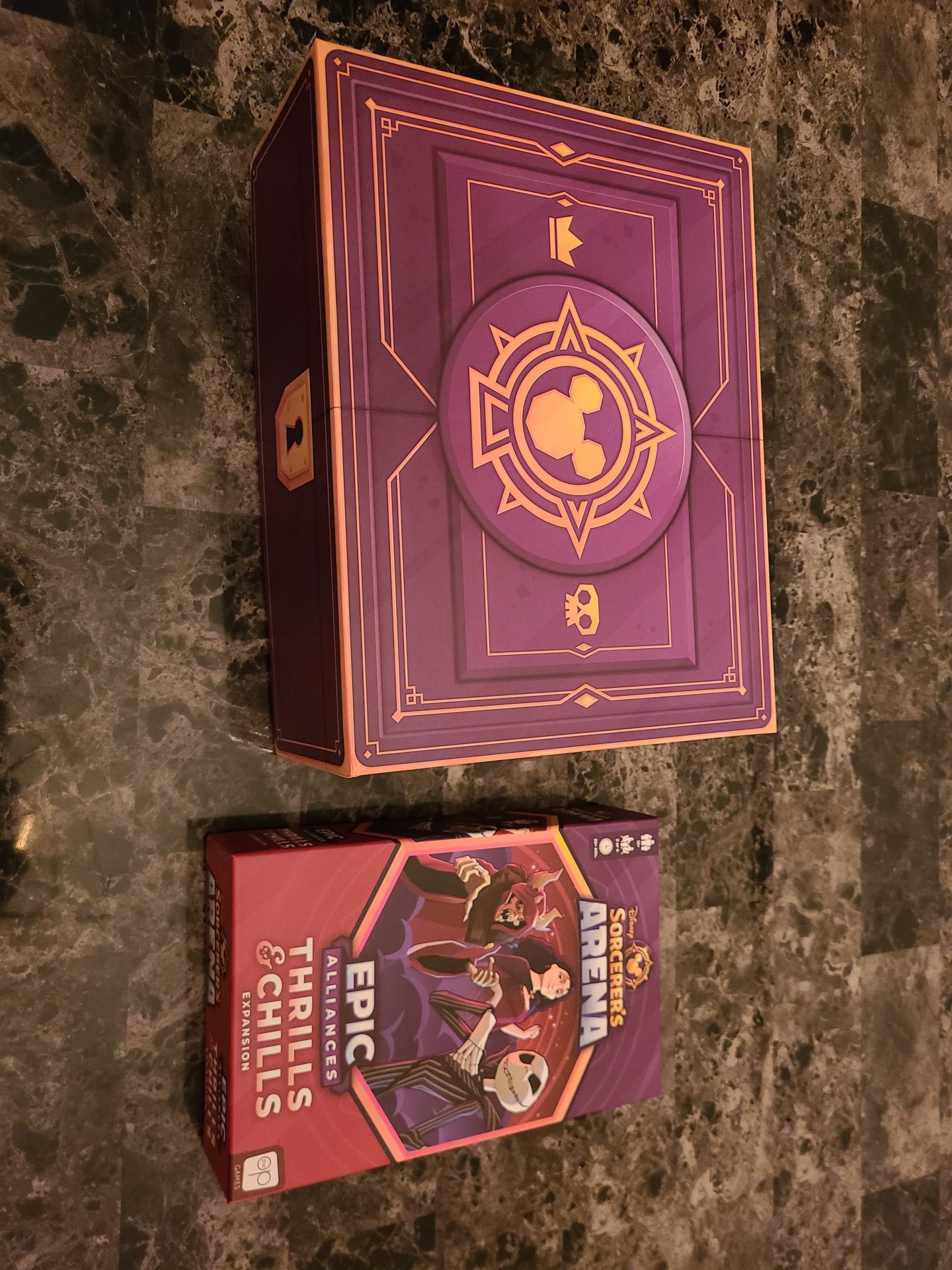 – Made enough space in the core set box for the expansion(s) which came out in the same year.

– Better tray storage (or a picture on how to store it properly) for the status effects and other punchouts.

– Raise the value from 1VP to 2VP for holding the golden space(s). Max of 4 per turn.

I got to say, the likelihood of me purchasing the Turning the Tides expansion to complete my set of Summoner’s Arena and having even more characters to choose from is really high. It feels akin to when I had (and loved) season 1 of Dice Throne and when season 2 came out, my decision was obvious. I had a lot of fun with the core set as well as the expansion and would recommend this game, specifically to people who enjoy duel and twin-headed dueling games.

Here’s a link to their website. The link will go straight to their Disney collection, but they have other products if you want to look at those as well.

After reading Brad’s review, if this sounds like a game for you at the time of this posting Disney Sorcerer’s Arena: Epic Alliances Core Set is available on TheOp.Games for only $49.99. ON SALE ON AMAZON for $36.29 currently!!
Check it out and get it HERE.
Find out more HERE.
Did you get it based on our review? Please comment below letting us know!