Congratulations Erin Moriarty winner of the Stellar Leap Kickstarter Giveaway! And a huge thank you to Weird Giraffe Games for bringing us this amazing giveaway!

Don’t forget to check out Stellar Leap on KICKSTARTER now through October 19, 2017. 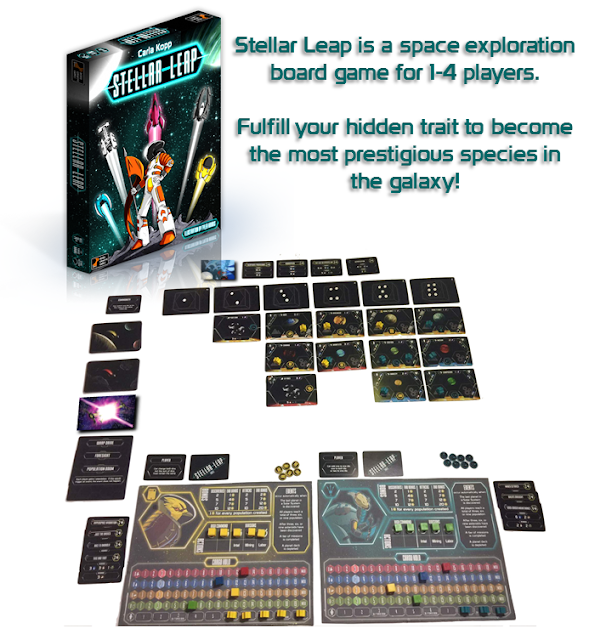 About Stellar Leap:
Explore the galaxy in Stellar Leap! Take on the role of an alien species as you discover new planets and complete missions in this family-friendly space exploration game. Become the most prestigous alien species in the galaxy by completing missions, discovering new planets, increasing population, and fulfilling your hidden trait’s objective.

Objective
Be the player with the most prestige at the end of the game.

During your turn perform two High Command actions such as increasing your population, taxing for more resources, discovering a planet, or attacking your opponents. You also have the following Division Actions at your disposal that can be activated once per turn: Labor, Intelligence, and Mining.

These Actions may be taken in any order you choose.

Variable Player Powers mean that you can manipulate the planets that generate resources each turn in different ways than your opponent can, which leads to different strategies for each power. Are you going to team up with your opponents so that everyone gets resources on your turn or will you attack them and cause them to scatter to other parts of the galaxy?

Game altering events are triggered by player actions and can have minor or lasting effects, usually being better for the player that triggered the event.

Game End
The game ends after the sixth event and the round is completed.
The player with the most total prestige is declared the winner!

Find out more about Stellar Leap on Kickstarter.com and BoardGameGeek.com.

Thank you Weird Giraffe Games for bringing this awesome giveaway to Everything Board Games!

This contest is for one copy of Herbaceous, Kingdomino, or Lotus, ends October 12, 2017 at 11:59 PM MST and is open worldwide. Void where prohibited or restricted by law. You may not win this contest if you have won a giveaway through EverythingBoardGames.com in the last 30 days. No Purchase Necessary.

Winner(s) will be selected October 13, 2017 via a random drawing from among all eligible entries and will be announced on this page and contacted by email. The winner(s) must contact EverythingBoardGames.com within 48 hours of notification. Any winner notification not responded to or returned as undeliverable will result in forfeiture at which point a new winner will be selected. The prize(s) will be fulfilled by Weird Giraffe Games.