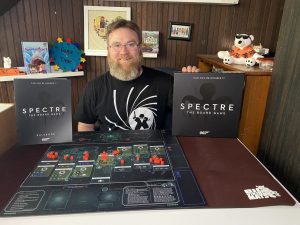 Quick Look: SPECTRE: The Board Game

In SPECTRE: The Board Game, you take on the role of one of the many iconic villains from the James Bond film franchise, competing with one another to become Number One of the Special Executive for Counter-intelligence, Terrorism, Revenge, and Extortion, a.k.a., SPECTRE.

Are you simply in the game to acquire gold bullion, or are your aspirations more philosophical, safe in the knowledge that the world would be better off with you running it? Each villain has their own plot inspired by films such as Dr. No (1962) and Diamonds Are Forever (1971) driving them along the path to becoming SPECTRE’s Number One. No matter how hard you try, though, 007 is always there, waiting to disrupt your plans and reveal your secrets.

SPECTRE: The Board Game features iconic weapons, locations, and characters from the James Bond films. You will be able to assemble devices, spy on your opponents, blackmail your rivals in order to build your own criminal empire, and strategically deploy your agents around the globe to infiltrate key installations. You need to work behind the scenes to develop your nefarious plots and become 007’s biggest threat, so grab your Persian cat and call your favorite henchman as you prepare your newest monologue — it’s time to get down to business and start building that moon base and world-destroying megalaser!

Disclaimer: The publisher provided the copy of SPECTRE: The Board Game. The opinions expressed in the review are completely my own.

I am a HUGE James Bond, and obviously a board gamer. This game was a no-brainer for me! I have been trying to locate the old James Bond RPG, so I was hoping this would scratch the itch of playing a James Bond board game. Then, the idea that you are actually playing as an agent of SPECTRE against other agents vying for control of the organization as well as the game’s AI playing as James Bond, and I was 100% sucked in. Let’s see if it is great like Skyfall, or a sad entry like Octopussy.

The atrocity that are the rules almost ruins the game before it begins. They are written all haphazardly. They are not linear. They make mention of terms not defined until later. The best thing you can do is, read them from cover to cover with the game in front of you, and jump around as you see fit. Then, read them again. And, well, maybe again.

It is worth noting that the BGG forum has some errata already for the rules. Some are clarifications, and some are mistranslations.

To set up, each player selects a color (red, green, yellow, blue) and takes both SPECTRE pawn pieces (square base and circle base), SPECTRE tracking chit, and 20 henchman cubes of selected color. Shuffle the Secret Plan Card deck and deal one to each player. Place all the resource tokens on their marching spot on the right side of the board.

Each player now selects an agent. Each SPECTRE agent now rolls the two dice. The agent with the highest total (the 007 counts as zero) takes the No 1 placard. The next highest the No 2, and so on. Next, take enough Scheme tokens to cover all schemes on the bottom of the Agent board (3 or 4).

Lastly, the Mission Card deck must be prepared. Find the On Her Majesty’s Secret Service card. Shuffle the remaining cards and deal six out. Place the OHMSS card on top, making the stack 7 (I wonder why that number), and you are ready to play.

SPECTRE has theme throughout. Each Villain Board has different schemes and abilities that are spot on for that character from the movie. For instance, Blofeld starts the game as No 1, and he can use any resource as any resource during the game. The locations on the board correspond to Bond movie locations and missions, like Crab Key and the Volcano Lair.

The mechanics seem like somebody took the book Building Blocks of Tabletop Design and just flipped to random pages and made that into a game. Yet, somehow it completely works. It is a worker placement, resource management, area control game with loads of theme and a dash on randomness from the 007 dice thrown in for good measure,

After deciphering the rules, the gameplay itself is straightforward. At the bottom of the board, the turn sequence is listed for a quick reminder.

The player currently No 1 flips over the top mission card and reads aloud the mission. The mission will have a certain parameter that must be met at the end of the round or consequences are dealt out.

Next, starting with space 2, check for majority at each location. The player with majority (most agent cubes) receives that location’s bonus and number chit. If there is a tie, the number chit is placed back by the board.

To resolve the Mission Card, players bid (using their resources) blindly. This of course happens only as long as the mission has automatically failed. This can occur if a villain pawn was required to be played on the mission. Depending on player count, each player bids resources. Any villain pawn on the required space is 3 points, any resource bid is 1 point, and agents in the location are worth one point. Assuming that the point threshold is met, the player with the highest point value wins the mission. That player’s SPECTRE tracker is moved one space, and they have the opportunity to complete a Secret Plan card. Anyone that participated in the successful bid receives a Secret Plan card.

Next, No 1 rolls the two 007 dice. These dice determine how 007 responds this round. If 2 gun barrel logos appear, remove one of each players’ agents from each location on the board. A single gun barrel and a number (1-4) allows the player with that placard number to select another player to flip one of their Secret Plan cards over, making it worth less points because 007 knows it. That player then places the 007 token (poker chip) on any region. While that token is there, no agents, villains, or henchmen may be deployed there. If the dice result are two numbers, the sum is where the 007 token is placed.

Lastly, the placards are redistributed based on the current standing on the SPECTRE track. A tie goes to who go there the most recently. The game ends when the results of the final mission card and secret plans are finalized. The most devious player is the one furthest down the SPECTRE track.

There are other minutia in this game, but to keep typing them all out would take forever. Suffice it to say, the game weight is a bit deceiving. After you play once, SPECTRE moves quicker the next time.

The components are all quality that you would expect from a larger publisher. The cards are all nice card stock, and you might want to sleeve them if you start to play this game a lot. The 3D SPECTRE logo looks great for the pawns. I hate cubes and I do wish that they had done something better for the agents. All the cardboard components are standard chipboard.

All the “artwork” comes from the movies. The graphic design of the board works except for the flipping of the actions and majority actions halfway across. This is confusing for no reason.

As a huge James Bond fan (I had a senior picture taken of me with all my Bond paraphernalia), I loved the richness of the theme. I loved that we were not playing as Bond but trying to be the best villain. It was such a great idea and well executed, unlike the plans of the villains. I just wish the rulebook was up to par with the rest of the game.

The biggest problem facing SPECTRE is the rulebook. It is atrocious. It is not laid out in anyway that makes logical sense. You are constantly flipping back and forth in it to try to make heads or tails of what you are trying to do. The Son and I just set the rulebook next to us and went for it. After about 4 rounds we had most of it figured out. On our second playthrough, we figured out a few other errors we were making.

I truly believe that SPECTRE will be better with each play. I would love to see more Bond villains. I know that neither Brosnan nor Dalton ever faced SPECTRE, but their villains are worthy of this game. They would make easy expansions. SPECTRE is ripe with theme, clunky with rules, but overall, it is deserving of space on your shelf. Its take on worker placement, and the randomness of James Bond makes for a very enjoyable gaming experience. SPECTRE is more Skyfall than Octopussy.

Appropriate shirt to wear while playing this game: https://meepleshirts.com/collections/board-game-t-shirts/products/secret-agent-meeple-t-shirt

After reading Adam’s review, if this sounds like a game for you at the time of this posting SPECTRE: The Board Game is available for purchase on AMAZON and modiphius.net for $59.99 and £50.00 GBP. Check it at the links above.
Find out more at BGG.
Did you back it based on our review? Please comment below letting us know!

Check out SPECTRE: The Board Game and Modiphius Entertainment on: