I got sent this game by the Flatworks crew and wanted to give it a shot. I’m a pretty big music nerd with a foolishly large song database, so I thought it might be a good fit. I was curious how it would play out, and if it was similar to Taboo the well-known party / family game. It wasn’t notably similar but does reside in a similar category.

Paraphrase – Songs In Other Words is a quick and fun party game where popular song titles are cleverly disguised through the art of paraphrasing. The game is fast-paced and fun for word enthusiasts and music fans alike! The creative word substitutions will amuse and entertain you. Recall the artist who made it a hit and earn extra points! Plus, extra points are earned for bursting into song! Your family and friends will be singing and laughing out loud with Paraphrase – Songs in Other Words!
Disclaimer: The publisher provided the prototype copy of Paraphrase – Songs in Other Words. The opinions expressed in the review are completely my own. 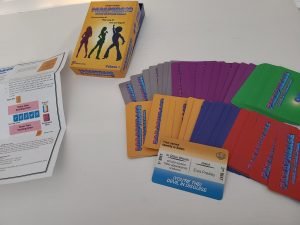 The game came in a very small and portable box. Not that that’s a bad thing, it could actually work well for its genre, but I was expecting a larger product. The card game had decent quality linen finish cards and the rules were short and sweet (Though with a couple of mistakes that I plan to point out to the publisher prior to their launch). Other than that, there was no real art to discuss, but the cards were laid out in a read-able and easy to understand format. UPDATE: The art from this prototype is dated. The box and cards will be redesigned for their launch.

I like the idea that this game can function as a sort of reverse Karaoke night. You’re allowed – actually encouraged – to sing out the tune if you know what it is and I believe the hope is to get people loosened up and to just enjoy an evening together. 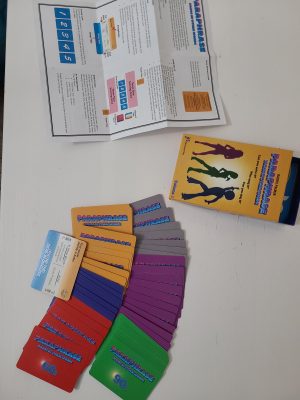 The songs covered were from the 60’s all the way to 2010’s with so many from each decade. I knew almost every song that came up but it was a real struggle for some of the players. I believe this game would be improved by making multiple mini games (same size as this box) using either a genre of music, or a specific time period. The number of people that know an abundance of songs across 6 decades, and would purchase the game, are slim. I’ll share that as well as other suggestions privately with the publisher as well.

I had more than a few notes that I would suggest in hopes of them improving the game. Thankfully, there is a lot of time for them to accomplish that before a full manufacturing run. I think the idea of the game is good, and all considered, is a pass, but I also feel their audience is a bit limited based on the ruleset, songs, and game type.

– Encouraging to be silly and just enjoy yourself

– Not including a timer (complete waste in this digital era) 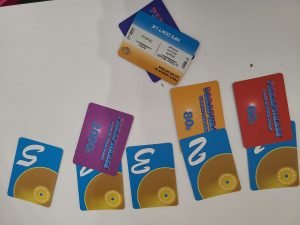 – Fine tune and editing of rules

– Reduce the randomness of what category a team might get.

– Allow a team to earn additional points if they get all 5 before 90 seconds.

– Target audience that is more specific.

– A way to include introverts more

I can see this game being a good find for people with an energetic and outgoing group, for people that had, at any time, frequented a karaoke bar, for dance and/or vocal groups, for team building groups, for drama/improv/art groups, etc. Depending on your family, or extended family, this could be a good way to get them to interact with each other too. I am unsure if it would stand the test against standard gaming groups.

Website: http://paraphrasegame.com/
After reading Brad’s review, if this sounds like a game for you at the time of this posting Paraphrase – Songs in Other Words will be live on KICKSTARTER from Tue, August 2 2022 until Tue, August 30 2022, and has a funding goal of $8,800. Check it out and click to be notified when it goes LIVE so you can back it HERE.
Find out more HERE..
Did you back it based on our review? Please comment below letting us know!

Check out Paraphrase – Songs in Other Words and Flatworks Games on: