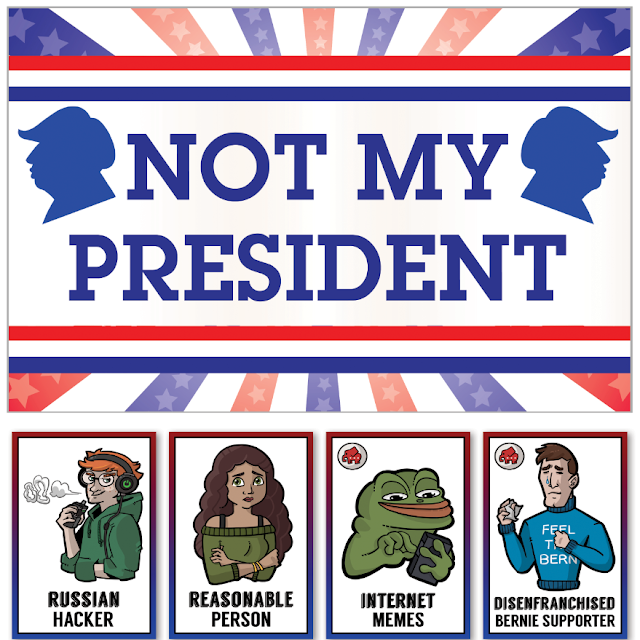 Congratulations Kay Barrett Moser winner of the Not My President Giveaway! A huge thank you to Just Jokes Games for brining us this giveaway.

If you were not the lucky winner but would still like to pick up a copy of Not My President you can back the Kickstarter campaign between now and April 13, 2017.

About Not My President:
Based off the popular game Mafia, Not My President is a high-energy, 3-12 player game of deception that lasts 5-10 minutes per round. Using your best poker face, diversionary tactics, and a lot of finger pointing, the goal of Not My President is to either find the Trump Supporters amongst you, or, if you are one, to keep yourself hidden through any means necessary. Lying, spreading chaos, and blaming others are highly encouraged tactics. The game begins when players randomly select and privately view a “role card,” dividing the party into two groups: Trump Supporters and Reasonable People. Players then close their eyes for the election night. During this phase, the free app guides you through the special abilities of your assigned roles. Players secretly swap cards, change identities, and cause more mayhem than a private email server. When everyone has taken their turn, players open their eyes, and the accusations begin. After 5-10 minutes, players vote for who they believe to be the most likely Trump Supporter. If they’re wrong, the Trump Supporters win. If they’re right, it’s probably fake news, and the Reasonable People win.

Find out more about Not My President on Kickstarter.com and BoardGameGeek.com.

Thank you Just Jokes Games for bringing this awesome giveaway to EverythingBoardGames!


This contest ends April 11, 2017 at 11:59 PM MST and is open to legal residents of the US who are 18 years or older. Void where prohibited or restricted by law. You may not win this contest if you have won a giveaway through EverythingBoardGames.com in the last 30 days.


Winner(s) will be selected April 12, 2017  via a random drawing from among all eligible entries and will be announced on this page and contacted by email. The winner(s) must contact EverythingBoardGames.com within 48 hours of notification. Any winner notification not responded to or returned as undeliverable will result in forfeiture at which point a new winner will be selected.